Henrik Mouritsen: The Freedman in the Roman World 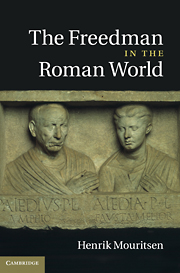 Had Henrik Mouritsen opted for a double-barrelled title divided by a colon, he could have employed a phrase from his own third chapter: "Citizens Without Honour" (79). For this description accurately characterizes freedmen in the Roman world, itself a world of freeborn citizens obsessed with honor. The Roman perception that slavery was morally corrupting and deprived the freed of honor shaped the Roman practices of manumission and the lives of the freed in ways clearly and cogently brought together in this excellent book. (The reviewer is thanked in the acknowledgments, but contributed only comments after a lecture and can therefore take no credit.) This is a magisterial synchronic overview of the subject that reconfigures the specific issues that have for decades drawn the attention of scholars. Chapters 1-4 examine Roman concerns ("discourse") in order to establish the frame that permits revisionist interpretations of the more nuts-and-bolts 'historical' issues of Chapters 5-8.

Chapter 1 observes that it is "the concerns caused by the entry of ex-slaves into free society that provide the key to understanding the place of freedmen in Roman society and the reactions they provoked," concerns that were "essentially moral and ideological rather than socio-economic" (7-8). For although slaves at Rome were made, not born, manumission implied no equality between freed and freeborn, since (Chapter 2) a servile past made the freed morally inferior, damaged and dishonored by their experience of subjection and physical punishment. Even so, the enslaved were unequally affected by their experience, and the Romans could imagine manumitting those who had made significant moral progress under the yoke of slavery. If masters did not manumit with an eye to this progress, their freed were denied full-citizen status: the reprehensible became dediticii and the young who had not (by necessity) had the time to grow morally became Junian Latins, both by the lex Aelia Sentia of AD 4. The institution of Roman manumission thus relied, at least ideologically, on the discriminating judgment of the master. It also rested, subsequently, on his patronal authority (Chapter 3), for a former slave's constricted moral sense would continue to need a master's supervision. Upon manumission, master and slave became patronus and libertus, the freedman "legally free but morally dependent," the relationship one of father and quasi-son, with implied bonds of trust and emotion. Freed could otherwise be controlled through some relatively weak legal measures (including legally enforceable respect, the dream of every college professor) and by informal conventions, especially stories of good and bad freedmen and their good or bad ends. Such stories, with their axes of vice and virtue fundamentally different from those of the freeborn (for not even the best freedman is ever praised for virtus), helped to define the freed as lacking the characteristics or potential of the freeborn, contributing the differentiations that the law could not and directing the freedman to know his place.

Freedmen knowing their place was important because of the power freedmen could wield (Chapter 4). During the Republic the freed were, by law or custom, citizens, but constitutional ways were found to neutralize their potential political power: they were classed with the poor and unwarlike, among the proletarii and the four urban tribes. With the shift to imperial power, it was informal influence that was feared, and control of their freed became the hallmark of good emperors. Now the informal (often scathing) opinions of high society rather than legal safeguards controlled, not always successfully, the influence of freedmen and their emperor-patrons. The hinge in this chapter is provided by the Augustan laws, which Mouritsen interprets as mostly symbolic declarations emphasizing 'quality control' and preserving the integrity of the Roman citizen body.

The contribution of Chapters 1-4, that "no statement about freedmen could ever be plainly descriptive," is then put to work in the chapters that follow. Chapter 5 attempts to establish a "structural framework" for Roman manumission by re-examining four much-examined topics: the scale (number and rate) of manumission; the motivations for manumission; self-purchase; and testamentary manumission. Numbers are very difficult to come by and can be misleading; Mouritsen concludes that manumission "was considered neither universal nor automatic," was "both very common and selective," and, in the end, was "more widespread in Rome than in any other slave society for which we have more detailed information" (139-41). Why? Because, as stressed earlier, the slave was transformed into a free person "subject to the lasting authority of [his] benefactor," a unique and continuing bond that provides the key for understanding self-purchase and testamentary freeing. Purchasing one's way out of slavery "was the exception, not the rule" (180), because it occurred when continuity of relationship was not expected; peculium was not "pocket-money" instantly converted into the price of freedom when enough had been saved, but an incentive intended to stay with slaves beyond manumission. Testamentary manumission was not common, but seemed so because it was high-profile and a "sensitive issue" (183). The gift of freedom by will deprived heirs of property while releasing the slave into a less paternal or sustaining patron-libertus relationship. Thus slaves freed testamentarily often entered their new status supported by a legacy, but also either paying the new heir for freedom or promising legally enforceable future service, known as "days of work" or operae.

Economic rationality, in the end, did not determine the structures of Roman manumission. Rather, proximity and familiarity, along with moral maturation, trust, and usefulness, were the best generators of manumission patterns. Freedmen did of course have a place in the Roman economy (Chapter 6), but did not constitute a separate economic class. Indeed, it is likely that freedmen prospered not on their own but in most cases with the help of their patroni, which stresses again that the post-manumission relationship was one of trust and collaboration rather than competition and independence, the freed acting as agents and managers for their former owners, from whom they could inherit wealth as well. The freedman's prominent economic role, in short, "grew logically out of his servile past" (228), and the existence of rich freedmen in no way refutes this, since previous scholars' assumption, that "wealthy" equalled "independent," has no firm foundation.

Freedmen were excluded from all official Roman honors--magistracies, priesthoods, and so on. But they found other ways of participating in public life (Chapter 7), especially as seviri Augustales, members of local associations that performed cultic functions in some way related to the emperor. Close examination suggests that the seviri Augustales may have been "an attempt to create a permanent framework for both outlays and symbolic returns, which any citizen irrespective of status could buy into," a way of laundering "libertine wealth" into a source of status and prestige (259-60). Freedmen and their sons (unmarked by a stigma of slavery, 265) thus found ways to advance, but with the help of their former patrons rather than despite them: a freedman career does not provide "a vision of open and unfettered social mobility driven by dynamic market forces" (178). But one must ask: advancing into what? What was the freedman's "own subjective experience, his views and outlook" (Chapter 8)? These are difficult to find. Most of this last chapter attacks texts (like the Satyricon) that seem to suggest one type of freedman (independent, wealthy, vulgar), one outlook on life (ditto), or one segregated freed world; instead, inscriptions are used to suggest varieties of attitudes and the integration of the freed into the wider world of Roman values, as could be expected of those whose conformity to those values had been important in their achievement of freedom. The closest freed-specific behavior the author can find is a focus on family and a tendency to seek spouses who shared the experience of slavery.

This book is valuable for the way it recasts or even reverses what we thought was typical or unusual: I found particularly striking the interpretation of the Augustan laws as more ideological than scholars have thought; the skepticism about the frequency of testamentary manumission; the assessment of operae as unusual rather than as the primary way of structuring the post-manumission relationship and peculium as a nest-egg for life after freedom rather than a potential payment for freedom itself; and the emphasis on the obedience, conformity, and integration of the freed. What makes these observations possible is a far more discriminating attitude towards sources, for Mouritsen never assumes that discourse was practice, and always views inscriptions through the lens of 'the epigraphic habit.' The book is also valuable for what it suggests about process: Romans may have thought freedmen 'citizens without honor,' but they also thought that those who struggled to overcome moral defect could be advanced along a path that itself was honorable, into a role as dutiful son and parent of an honorable citizen. Honor might even be, from this perspective, incremental: the freed started paying into this bank at manumission, hoping to amass a patrimony of which a patron could approve and on which a son could draw. Trimalchio still casts a rich and grotesque shadow across the subject, but now we have a much better sense of where the distorting mirrors in Petronius's funhouse are placed, and what the people walking through the house might really have looked like.