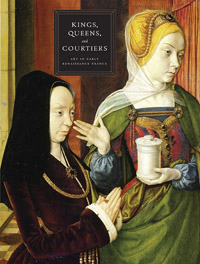 This is the English-language catalogue of a major collaborative exhibition, held first in Paris ("France 1500. Entre Moyen Age et Renaissance", Grand Palais, October 2010-January 2011), then at The Art Institute of Chicago (February-May 2011). The show was downsized when it crossed the Atlantic, its display items decreasing from 207 to 116. A similar contraction affects the respective catalogues. 400 pages became 208 in the volume under review here; its essays and entries were written by a team of 30, not 37 (international, but predominantly French) experts. Both are nonetheless top-of-the-line publications, overseen by the same four highly qualified organizers: Geneviève Bresc-Bautier, Thierry Crépin-Leblond, Élisabeth Taburet-Delahaye and Martha Wolff. The catalogues hence share the same basic approach. While the covers are distinct, each foregrounds an exquisite detail from a (different) work of Jean Hey - the name now almost universally given to the "Master of Moulins", arguably the "star" at both venues. The Chicago exhibition was conceived as a blockbuster with loans borrowed from over 50 institutions and private lenders, both sides of the Atlantic.

A magnificent "wall" of Hey's painted panels greeted the visitor when he or she entered the Paris exhibition. Similarly, the heart of the Chicago display was the Hey room, and especially the "Nativity", rarely seen outside of Autun, in which Cardinal Jean Rolin had himself portrayed with his favorite lapdog, in perpetual adoration of a luminous Christ Child. Although all of the corresponding entries were written by Martha Wolff, general editor of the English-language texts, Hey's example demonstrates that scholars will need to consult both the French and English catalogues. Nine of Hey's currently separated panels were on display in both cities; three (all from the same Louvre triptych) in Paris alone; and two others (Louvre, National Gallery London) solely at the Art Institute.

An entire section on architecture and mural painting does not appear in the Chicago volume. One must also consult the Paris catalogue to get a broader picture of the famed yet evasive Jean Perréal, with a superb full-page reproduction of his "Louis XII Kneeling in Prayer" (n° 33, 108-109). Jean Bourdichon's fine miniature of "Louis XII Kneeling in Prayer accompanied by Three Saints" is wonderfully complementary. Exhibited solely in the United States, it is treated in the Chicago catalogue instead (n°40, 105).

The intercontinental project proposes an updated overview of the art produced during a long period of historical transition, chronologically bracketed by the end of the Hundred Years' War (medieval), and the slow rise to power of Francis I (Renaissance). Regional clusters, introduced by Geneviève Bresc-Bautier ("The Sources of Artistic Creation: Centers and Artists", 98-103), fill a good portion of the catalogue proper. The first of these correspond to vortexes of power. The manuscript production of Jean Bourdichon, Jean Poyer (with panels and drawings too), and Jean Colombe falls under the rubric "Bourges and the Loire Valley" (104-121). The lion's share of the ensuing chapter, "The Bourbons and the Bourbonnais" (122-139), revolves around Hey's works, with stained glass and sculpture thought to be of his invention alongside the aforementioned panels. Martha Wolff traces the evolution of this artist from the North (one of many: see F. Elsig's contributions, 40-43 and 154-155), as he monumentalized his style and reshaped his art to respond to French (dynastic) demands.

Several essays hammer in the point that this was an age when artistic creation crossed media boundaries (P. Contamine 15; P. Lorenz 22-24; F. Elsig 43; É. Taburet-Delahaye and S. Lepape 163-165). In fact, the conviction underpins the very structure of both exhibitions, both catalogues. "Paris, Capital of the Arts" (140-153) and "The Diffusion of the Work of Art" (162-179) align book production (vellum or paper), intimate manuscripts (Pierre Sala's "Little Book of Love"), woodcuts, a woodcut-adorned coffer (with secret compartments made for transportation), stained glass, late Gothic tapestries, enamels, goldsmith work (the vessel made for the heart of Anne of Brittany a highlight), small portable portraits (the "Matheron Diptych" with its rarely exhibited portable velvet pouch), wood carvings, stoneware and bronze.

Every single chapter mixes media, defying the standard display policies of the lending institutions themselves. Insistence on the complex multiplicity of the age is simultaneously enhanced by the "acquired polyphony" of styles (P.-Y. Le Pogam, "The Artistic Landscape around 1500: Words and Things", 33), as Late Gothic and Renaissance ("The Fascination of Italy: Myth and Reality", 180-200) intermingle or collide. In Chicago, the show was intended to dazzle a public never before introduced to the rich fabric of the French royal court around 1500. Its objects underscored the luxurious tastes of French patrons, including royal ladies - as the American title indicates.

"In the beginning was the patron", Philippe Lorentz asserts ("The Genesis of the Work of Art: The Patron and the Artist in France around 1500", 21). And Louis XII, shown in a Bourdichon illumination detail from Jean Marot's "Voyage de Gênes" (14), leads the reader into Philippe Contamine's introductory essay "The France of Charles VIII & Louis XII: a Turning Point?". Others, such as Wolff's "Louis XI & the Princes of the Blood", pivot around individual patrons. Wolff and Crépin-Leblond produce "Kings and Their Artists"; and as in the catalogue as a whole, Louis XII shares therein much of the limelight with his queen.

Wolff's "Princesses as Patrons" (34-39), absent from the Paris volume, signals the differing sensitivities of French and American audiences. Yet the chapter is not one of the best. Foundational bibliography is missing (e.g. Pauline Matarasso's book on Anne of France, Anne of Brittany and Louise of Savoy [1], the three main figures discussed). A few references are sloppy ("Viennot 2001" or "Vrand 2010", cited a number of times throughout the catalogue, do not figure in the bibliography; Hochner 2010 becomes 2006). Female patronage, independent or conjugal, actually extended well beyond courtly circles - a case in point being Jeanne Peschard, wife of Dreux Budé, whose daughter Catherine then wed the famed patron Étienne Chevalier (n°6-8, 52-55). The essay reads as an appendage to the project as a whole. To my mind, the entry on Bourdichon's "Bathsheba Bathing" (n°41, 106) offers the best gendered contribution. Thomas Kren's finely trained technical eye picks up on Louis XII's male gaze; he then links the image to the grand future of the French Renaissance nude.

This volume very successfully advances our knowledge of a still understudied part of the European Renaissance that deserves the superb quality assured by Yale University Press. How, though, can it lack an index, a crucial tool for a production of this sort?

The next scholarly phase will hopefully follow the path mapped out by Michael Cothren in an impressive study of a Renaissance stained-glass window at Beauvais. [2] Drawing upon Michael Baxandall, he proposes moving beyond "sub-theoretical" approaches (cataloguing, documentation, production, defining artistic personalities etc.) to reach an "anti-theoretical platform", whereupon "design and production, patronage and propaganda, devotion and reception" come together to forge historical sense. It is a pity that a project threaded around the year 1500, with religious art at its very core, never considers the wide-spread conviction that the world was then coming to an end; nor is it sensitive to signs of the divisions that would soon tear the Christian world apart. French kings, queens, and courtiers figured among those centrally concerned.

This review was written with the collaboration of Annemarie Jordan-Gschwend.