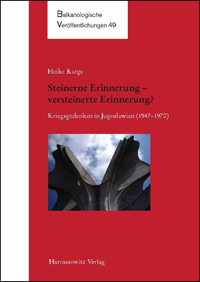 Heike Karge's book is a welcome addition to the emerging literature on memory and commemoration of World War II in socialist Yugoslavia. The work is motivated by Karge's correct observation of the paradox that underpins much of the scholarship on this topic: while most scholars agree that different aspects of state-sponsored remembrance of World War II in Yugoslavia played a decisive role in the violent unraveling of the country in the 1990s, there is virtual silence on how exactly those practices of remembrance emerged, were implemented, appropriated, contested, or reinforced by various actors over time. Instead, many scholars have conceptualized commemorative practices of the war in socialist Yugoslavia as state-imposed and pushed onto Yugoslavs from above; oppositional memories, in this view, either contributed to the break-up or were unleashed by it, but were in any case legitimized only after the era of this "frozen" memory practices was over.

In order to engage this "refrigerator metaphor" (11) critically, Karge addresses several important and related themes, and does so logically and in a well-organized manner. The first chapter thus lays out the theoretical foundations of her study of World War II remembrance in Yugoslavia. Rather than dedicate herself merely to the examination of state-produced discourses of history and remembrance, Karge aims to understand remembrance as a set of social practices occurring in the public sphere. Culture of memory, in this view, becomes a much broader object of study: it consists of "predominantly non-scientific, in any case public forms and practices of appropriation of the past, that is, debate[s] with history and past of the Second World War in different public spheres of Yugoslav society" (21, emphasis in the original). This approach, of course, builds on a number of now well-established methodological approaches to memory studies developed over the last several decades in English- and German-language cultural history (and French literature that Karge accesses through German translation), which Karge duly cites and draws from. In the context of memory studies relating to socialist Yugoslavia, however, this is a path less traveled; although Karge limits her work to the study of monuments and physical memorial sites, it should be commended as important and new in this context.

Chapters two through four examine different aspects of the main memory maker in socialist Yugoslavia, the Union of Fighters in the War of National Liberation in Yugoslavia. [1] Karge first traces the history of the Union itself, positing a fateful shift (which she places in 1961) in its activities - from tending to the war generation to the generation without first-hand war experiences. This shift, she argues, had direct implications on the Union's thinking about proper ways to commemorate the war. Karge then moves on to examine the local practices of remembrance - from municipality to region and republic - in order to register tensions between themes mandated "from above" ("brotherhood and unity," socialist revolution) and aesthetic characteristics of a large number of monuments built across Yugoslavia on initiative of local branches of the Union. Finally, she focuses on the short-lived (1952-1963) Committee for Marking and Maintaining of Historical Sites from the War of National Liberation. [2] This special committee of the Union, highly centralized and with a seat in Belgrade, attempted to define both the themes to be commemorated by all-Yugoslav monuments (partisan fighter; woman fighter; proletarian brigades; comrade Tito; working class) as well as deal with commemoration demands of quite specific historical events and sites (the "fifth enemy offensive" and the battle of Sutjeska; the Jasenovac camp; the Srem/Srijem front). Through detailing the challenges to defining what constitutes a Yugoslav monument to World War II, and how and where the war should be commemorated, Karge presents a dynamic setting in which commemorative practices emerged from many complex concerns and considerations. Should the monument to the woman fighter be built in Bosanski Petrovac or in Zagreb or Ljubljana? Was the Srem/Srijem front offensive in the last months of the war the heroic epic of the Yugoslav peoples, or the example of military incompetence with a catastrophic casualty rate?

Chapters five and six consist of case studies of individual memorial sites and categories. Each case study describes complex debates, contestations, and appropriations of meaning and memorial practices in specific Yugoslav contexts. Debates about proper ways to strike the balance between commemorating partisan heroism at Tjentište and marking the individual death of Sava Kovačević, the legendary partisan commander, illustrate the complexities and tensions between mandated ideological strictures, the physical nature of monuments, and memorial practices and understandings of visitors to the memorial. The history of ideological attempts and local resistance(s) to casting the victims of the German reprisal shootings in Kragujevac as heroes, and the more general question of how to incorporate victimhood (specifically of camp survivors) into the narrative of heroism, are two other examples Karge draws on in order to complicate the history of remembrance in Yugoslavia. And, finally, the recounting of the long and complicated history of debates and struggles surrounding the commemoration of victims in Jasenovac (What/whom to commemorate exactly? How to reconcile the genocidal push of the ustaša state with the narrative of "brotherhood and unity"? How to deal with spontaneous, on-site commemorations of groups outside the orbit of the Union?) ends this part of the book by connecting the vicissitudes of memory work in socialist Yugoslavia to the history of the break-up in the 1990s. Chapter eight, the only one that does not focus specifically on monuments and memorials, outlines the history of World War II remembrance in education.

Karge's book is a well-researched, solid work of a sophisticated historian. There are places in the book in which the reader wishes that she would provide more historical context; sometimes, the larger dynamic of Yugoslav history - especially the timeline of decentralization and the process of vesting real political power in the republics - is mentioned only in passing. Also, in a book that investigates aesthetic, spatial, temporal, and other aspects of monuments and other physical embodiments of memory, illustrations are of crucial importance. Unfortunately, there are none in Karge's book. Still, both these shortcomings are ultimately not all that important, and do not diminish in any way the thrust of the book. Steinerne Erinnerung - versteinerte Erinnerung? Kriegsgedenken in Jugoslawien (1947-1970) is, without any doubt, a groundbreaking work in the context of memory studies in socialist Yugoslavia, because the author undertakes to go beyond facile understandings of history and memory in Yugoslavia, and sets out to complicate the seemingly self-evident and linear flows between them. One other work that comes to mind in this fledgling body of literature is Max Bergholz's recent doctoral dissertation on the silences of memory in Bosnia-Hercegovina. [3] One can only hope that other researchers working on memory and representation of World War II in Yugoslavia will follow in the steps of these important works.

[3] Max Bergholz: None of Us Dared Say Anything. Mass Killing in a Bosnian Community during World War II and the Postwar Culture of Silence, Ph.D. dissertation, University of Toronto, 2010.

Views expressed in this review are the author's only, and do not express views of the United States Holocaust Memorial Museum in any way.