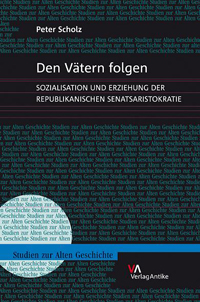 The subtitle neatly describes the three chapters at this book's core. After an introduction that surveys previous scholarship in order to delineate his own approach, Scholz shows how male youths "follow fathers (or fathers-proxy)" in manipulating their developing personae so as to replicate aristocratic habitus (Chapter 2). Using especially Cicero's De officiis, the author describes how the urban elite (Senatsaristokratie) created recognizable standards of physical decorum. In maintaining a class-specific habitus that literally embodies elite values, the ruling classes offer a visual resolution to the continual tension in the republic between personal ambition and responsibility for the collective. Scholz illustrates the real-world resonance behind prescriptions such as these by offering, among other things, an astute chronological survey of the Scipionic epitaphs from the third and second centuries (39-59).

The young students "follow their fathers" in an ethical sense as well as they are taught to replicate traditional values (Chapter 3). Scholz rehearses the well-known evidence for Roman education. Offering a welcome consideration of both physical and intellectual exercises, he again stresses the important role of the father figure at each stage. He also notes significant differences from Greek models (the implications of these differences receive explicit attention in the concluding Chapter 5). Particularly fruitful is the demonstration of how three successive generations of students in the republic's final century receive a successively deeper training in Greek disciplines, until poetry and more esoteric philosophical subjects emerge as standard items in the curriculum. Although much of this discussion depends on trusting potentially tendentious evidence from Cicero's orations and philosophica, the analysis eventually convinces due to the sheer mass of data that the author has assembled.

Chapter 4, lastly, finds these young men literally "following their fathers" into the military and the forum as they shadow their elders for preliminary training (tirocinium) in the arts of war and rhetoric. Scholz places particular stress on Pliny's statement that this stage of the socialization process constitutes both "hearing" and "seeing;" the tiro is meant to learn not just tactics and facts but to observe appropriate forms of behavior (ep. 8.14). Specific examples show the tirocinium in action: Cicero's public writings preserve plentiful evidence about both his own training in the forum and his supervision of youthful members of the elite such as Curio and Caelius, while his correspondence recounts the painful steps taken by his son Marcus and nephew Quintus as they mature into adulthood under the long shadow of their successful namesakes.

This ambitious book treats not simply the "what" and "how" of the educational process. Rather, it concentrates on the ways in which learning shapes and socializes the urban elite. As a result, Scholz not only examines how the mos maiorum is negotiated and perpetuated through the generations as a malleable repository for ethical and political values, but he also investigates the ways in which these values become physically embodied and expressed. As a result of the breadth of this approach, evidence is assembled from a wide array of sources, genres, and periods. Despite this diversity, however, the argument is throughout careful, clear, and accurate, and evidence is rarely pressed to say more than it can. Moreover, Scholz frequently introduces familiar evidence in a novel way. He provides a detailed account of the names of Spanish soldiers awarded citizenship in 89 BC (CIL I, 2 709 ~ ILS 8888) in order to reconstruct what types of youths made up the consilium of a Roman magistrate, and he deploys Cicero's letters of recommendation (fam. 13) to illustrate the sorts of virtues that a young member of the elite is expected to have acquired before entering a military career. In an exegesis that treats such a wide variety of topics - indeed, the reader begins to wonder what aspect of Roman social and political life does not have relevance to the argument - it is perhaps inevitable that a number of extraneous discussions occur (e.g., irrelevant details concerning historical figures such as the Scipiones, or the varieties of the toga, or different types of military decoration). Even so, the reader may easily choose to skim or skip such digressions since they are sufficiently signposted in the text (or in the full table of contents; the absence of an Index locorum, however, is greatly to be regretted).

My principal reservation about this thorough investigation is the impression it gives of elite education as a monolithic model that, following Cicero (of necessity one of our primary sources), effectively silences competing voices. Whose fathers are we talking about? I shall cite two examples where a different reading of the evidence presented by Scholz may provide an alternative perspective. First, Scholz narrates the deep disappointment that Cicero and his brother felt over the young Quintus's decision in March 49 to join up with Julius Caesar. Scholz seems to agree with Cicero's assessment that this defection, far from reflecting a failure in the education offered by him and his brother (patrum culpa), is in fact attributable to Quintus's "nature." The Latin word natura is a slippery concept often appealed to by the Roman elite to create and preserve distinctions among the different segments of the population, and Cicero in fact has recourse to the term on two separate occasions in describing to Atticus the recalcitrance of the young Quintus. It is reasonable to assume that Quintus would not have agreed with his uncle's assessment, and of course the troublesome Julius Caesar is also the product of an analogous process of education and socialization. How would such outliers describe their own situation within Scholz's schema? Are we simply to agree with Cicero and dismiss them as aberrations of nature? This raises a second and related point. It is important to recall that the adaptation of the Greek modes of education that Scholz details is strictly an activity of the political elite, and an elite based firmly in the city of Rome. In contrast with Greek precedents, the Roman republic offered no state-funded education to the populace at large; and, as Cicero bluntly puts it, learning Greek in Lilybaeum is not the same as learning it in Athens, nor does one properly understand Latin literature unless it is studied in Rome (Div. Caec. 39). As Scholz suggests in a dense and intriguingly brief closing Exkurs that, I hope, heralds future research, Greek studies offered Romans an unprecedented source for exercising the intellect. At the same time, however, it is worth remembering that the learning and training of these Romans operated within a privileged space that it was difficult - if not impossible - for the non-elite to access.

Den Vätern folgen, despite the slight reservations I have about unnecessary details and missed opportunities, performs a singular service in providing the fullest available account of the process of elite education during the Roman republic. Anyone wishing to engage with the politics and sociology of how Rome trained and educated its "best" will find Scholz's collection of evidence indispensable and his ideas provocative.