Mitchell B. Merback: Pilgrimage and Pogrom. Violence, Memory, and Visual Culture at the Host-Miracle Shrines of Germany and Austria , Chicago: University of Chicago Press 2012 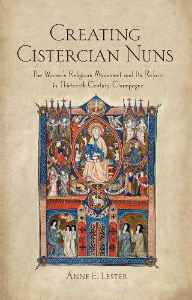 Anne E. Lester (University of Colorado at Boulder) writes in her acknowledgments, this book began "with the gift of an archive [...]" (xv), that is a collection of several hundred medieval charters, previously overlooked and unpublished, concerning convents of Cistercian nuns in the historical region of Champagne, France and recounts the delightful story of their discovery in the preface. This book is based on a PhD-dissertation presented at Princeton University in 2003.

Creating Cistercian Nuns is divided into six chapters, preceded by an introduction and concluding with an epilogue. The stated goals of the book: to trace, on the basis of these charters, the earliest manifestation of the women's religious movement in Champagne and analyze its reform and institutionalization as part of the Cistercian Order (5, 6). This is to be contextualized within the broader topic of the religious culture and devotional practices of the 13th century. Lester wishes to contrast her study as a "new narrative" (12) as opposed to the "narrative [that] has dominated modern historiography" (9) based on Herbert Grundmann's Religious Movements of the Middle Ages. Unfortunately, Lester's severe criticism of Grundmann's seminal book is inappropriate, since it laid the very foundation for studies such as hers.

In chapter one, Lester describes the emergence of the women's religious movement in the region, recounting the developments particular to Champagne. The lavishly endowed Argensolles, founded in 1222, was to remain the exception. The numerous smaller abbeys emerging throughout the county within a decade had much humbler origins, as communities of unaffiliated religious women referred to as Filles-Dieu or domus-Dei.

The social context in which the Cistercian convents served is illuminated in chapter two. Lester describes the significant changes in Champagne in the 1230s, when the count granted an unprecedented series of urban franchises to six major towns in the county. New social groups emerged that were all closely tied to urban society and significantly influenced sociological developments. These new groups became major patrons of the communities of religious women re-formed into Cistercian nuns' convents.

The economic success of the towns of the renowned "Champagne Fairs" had the greatest impact on the social and religious life of the county. Rents for stalls, houses and hostels in the fair towns were valuable sources of income and would frequently be donated to monastic houses. The convents' income was thus closely connected to and dependent on the fairs. Like Cistercian convents elsewhere, the Champagne abbeys strove to consolidate their holdings, whether urban or rural. Lester demonstrates that a majority were foundations by members of the bourgeoisie and lesser aristocracy. From what she is able to glean from the charters (other sources have not survived), most of the convents were socially and economically mixed and remained relatively small with somewhere between 20 and 40 sisters.

Chapter three is devoted to a discussion of the religious reform of the 13th century and the issues involved in the relationships between religious women and the Cistercian Order. Significant changes evolved in the first half of the 13th century, with an emphasis on claustration under a formal rule and a heightened level of juridical formalism demanded by canon law. (87) Especially in northern France, Lester concludes, the General Chapter statutes of 1225 and 1228 functioned as guidelines for the process of transforming and institutionalizing the religious movement (96). Other regional studies for Lower Saxony (Gerd Ahlers, 2002), and Halberstadt (Cornelia Oefelein, 2004) have shown that formal incorporation of Cistercian nuns' abbeys appears to lose relevance in proportion to the increased distance to Cîteaux and the Order's home territory. Although all Champagne convents seem to have been incorporated, regular visitations by Cistercian abbots were rare (110) and the bishops still claimed and maintained jurisdiction over new Cistercian convents (113).

Distinctive of the smaller Champagne convents was that they began as religious communities dedicated to the practice of apostolic charity. Chapter four traces the religious transformation of these informal hospital communities into formal institutions of professed Cistercian nuns. The reformed communities retained their affiliation with the hospital or hospice after incorporation into the Order. Lester argues, this practiced apostolic charity for the poor and suffering fostered "a particular kind of Cistercian female spirituality" - in this region, one must add.

Chapter five describes the close relationship between the Cistercian convents and the crusading aristocratic families of Champagne, who had participated in every campaign to the East between 1095 and 1270. These families founded new female Cistercian houses, or bestowed their patronage. The communities received female family members of crusaders, and served as burial places for crusaders and their families. These relationships significantly influenced the practices of these communities and lent a distinct new facet to their spirituality.

Finally in chapter six, Lester portrays the Champagne convents' administration and economic development. Since other records have not survived, she must base her analysis almost entirely on the charter collection she has studied. It remains unclear who exactly was in charge of managing these abbeys. Lester describes no position equivalent to the German "Propst". In contrast to the German Cistercian nuns' abbeys, the Champagne nuns rarely issued or officiated at the creation of their charters. They relied on unaffiliated secular clergy connected to the episcopal court, special local deans known as "deans of Christianity," to draw up charters and rental books (181).

Lester's analysis of the economic development and activities of the Champagne convents confirms tendencies observed in other regional studies: that women's abbeys tended to be located in or near urban settings, and that their economies relied less on income from extensive grange agriculture as practiced by the Cistercian men's houses, but primarily on income from tithes, crop and money rents, and leases. Lester's observation that large expanses of arable land were no longer available for donation or sale by the mid-13th century holds especially true for the region of her study. One feature particular to the Champagne convents is the income generated in connection with the fairs.

Lester concludes her study with an exceedingly compact and poignant account of the dramatic decline of the Champagne convents in the troubled 14th century (Epilogue). The pressures of inflation and population growth began to erode the economic stability of the county Champagne by the end of the 13th century. The papal bull Periculoso (1298), demanding total claustration for all professed nuns, acutely affected the economy of women's houses. The convents struggled to maintain solvency as the values of rents declined and the Champagne fairs waned. Then famine descended, followed by The Hundred Years War bringing death, destruction, exile, and finally suppression. Many convents never recovered from compounded crises of debt and war. In 1399 the General Chapter decreed that all houses with fewer than twelve nuns be converted into cells for monks. The buildings, and with them the nuns' archives, passed to the nearest Cistercian male house.

Lester complements her study with a useful appendix, listing the Cistercian convents of northern France in chronological order according to foundation date. It also indicates those houses affiliated with hospitals, diocese, the bishop at the time of foundation, and significant patrons. This table could have been improved by including the filiation to Cîteaux or Clairvaux and the dates of suppression or demise.

Anne Lester provides an important contribution to the history of Cistercian women's houses. Her original archival research and detailed analysis of previously unstudied charters on the convents in the county of Champagne will further advance our understanding of the Order's history. Lester's book is strongest where she narrates the historical facts of the histories of these convents. Her efforts to "contextualize" her findings, on the other hand, are less convincing. The often unnecessary, repetitive use of trendy terminology - "networking," "gendering" - detracts from, rather than enhances her argument. It will not be necessary to rewrite the entire history of the Cistercian Order, but each new regional and local study published adds another significant piece to the larger mosaic, provides new details and new facets to the great diversity that appears characteristic of the development of female monastic houses of Cistercian observance.