Stephen Halliwell: Between Ecstasy and Truth 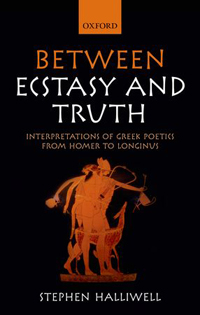 In Between Ecstasy and Truth: Interpretations of Greek Poetics from Homer to Longinus, Stephen Halliwell presents a series of thematically connected essays that address questions of poetic value in the ancient world. Each chapter treats a significant author, work, or moment in the history of ancient criticism, covering a span of nearly a thousand years. The volume's six chapters do not seek to present an overarching argument, although the readings are loosely linked by an ongoing concern with the properties of emotional experience on the one hand, and factual accuracy on the other: the "ecstasy" and "truth" of Halliwell's title.

It would be wrong to place too much weight on a structure which the author is himself eager to qualify as a 'guiding schema flexible enough to be modified for the preoccupations of particular texts and contexts' (80). It will nonetheless be helpful to take a preliminary account of how the ideas of ecstasy and truth tend to function in Halliwell's readings. The antinomy owes its primary formulation to Plato, and seems convincing when it is used to explore the philosopher's complex and often contradictory views of poetic value. By attending to the discussion of poetic rapture in the Ion, Halliwell is able to explore the philosopher's "persistent, unresolved ambivalence" (159) to poetry and its role in society. It is in light of this ambivalence, he argues, that Republic 10 insists on Socrates' susceptibility to the enchantments of poetry, despite his awareness that it can make no defensible claim to truth.

Elsewhere, however, it is less clear how Halliwell benefits from the structuring principles of his guiding opposition. In his discussion of Homer, for example, he so strongly insists on poetry's ecstatic power that the mildly eroticized language that can attend descriptions of song is treated as though it were exceptional, rather than sharing in the terminology of desire that the epics use with reference to a wide variety of activities. [1] This selective focus on Homeric affect, paired with a notion of objective truth that at times betrays its post-Enlightenment foundations, weakens Halliwell's otherwise thought-provoking interpretations of a number of well-worn passages. Similarly, one wonders if Halliwell would have been so ready to pronounce Aristophanes' Frogs a critical "failure" had he been freed from considerations of ecstasy and truth. While it is true that the Frogs ultimately fails to "establish a set of criteria for judging the value of tragedy" (96), Halliwell's desire to identify a coherent, logical framework within the play leads him to dismiss exchanges about style, staging, and characterization as "little better than a chaotic flux" (129). The rich critical debate over the distinctive properties of late fifth-century tragedy is reduced to a simple binary of sensation versus reason, with the emotionally incontinent Dionysus standing as mirror to the Athenian audience as they "react intensely to tragic drama without possessing a fully integrated understanding of why" (148).

Given the frequently distorting effects of his guiding structure, it is tempting to conclude that Halliwell's interest in the relationship between ecstasy and truth functions as a proxy for a larger, albeit tacit, argument that ancient poetics be judged on universal, rather than historically contextualized, principles. As Raymond Geuss has observed, the Platonic framework that seeks to understand poetry in terms of "knowledge" and "truth" entails the assumption that poetry admits of a formal definition, and therefore of a correspondingly "fixed essence". [2] Even the more flexible Platonism proposed by Halliwell yields a stubborn ahistoricism that colors each of the volume's chapters - whether it be in addressing Aristophanes' Frogs without reference to other works of the playwright or his contemporaries, or in leaving unexplored the nature of Longinus' "relatively late" status "in the tradition of Greek literary and rhetorical criticism" (332). The volume is not without an historical framework; much is made, for instance, of the fact that Homer can be said to possess a "poetics" despite his early date (36-7). But when Halliwell concludes that the poetics of Homer aim to transform "subjective suffering" into "objective pleasure" (65), it is hard to resist the sense that an ideal of timeless truth, and not the ever-shifting parameters of historical thinking, has shaped the core of Halliwell's approach.

For this reader, at least, Halliwell's universalism often set the book's interpretive center at odds with its surface, a fact that generates a certain degree of confusion. The most striking outcome of this underlying inconsistency is the relationship of the three chapters treating, respectively, Plato, Aristotle, and then Gorgias, Isocrates, and Philodemus. A cursory glance reveals the predicament: Plato's forerunner Gorgias and Isocrates, his fourth-century contemporary, are to be discussed alongside a first-century BC author in a chapter that comes after Halliwell's treatment not only of Plato, but also of Aristotle. The anachronism raises queries at a number of levels: does the emphasis placed on the contrast between prose and poetry in Halliwell's treatment of Gorgias and Isocrates imply that the same opposition was not a formative element of Plato's or Aristotle's views? Are we to understand that despite Gorgias' and Isocrates' chronological and geographical proximity to, and acknowledged connections with, Plato and Aristotle that the work of the former is more closely aligned with that of Philodemus, writing three centuries later, as the Romans were beginning to hold sway over the Mediterranean? And finally, why is the discussion of Plato and Aristotle conducted without significant reference to Gorgias, whose influence on those later thinkers is readily acknowledged in the later chapter (259, 267)? Here, as elsewhere, one wishes that Halliwell had ventured to make his tacit aims explicit, to provide a more robust framework for his provocative and insightful readings.

[1] Halliwell himself notes the parallels in battle description (72). Language of charged emotion and especially desire is also found in Homer with reference to objects, places, food and drink, and weeping.