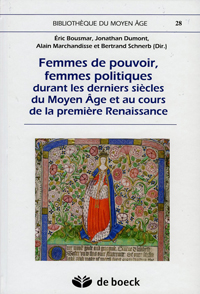 This book is an imposing volume that contains the proceedings of a 2006 conference on women in power during the late Middle Ages and early Renaissance throughout Europe. The four organizers and editors have obviously worked hard to unify thirty-one diverse essays as well as incorporate a conclusion summarizing the proceedings by Colette Beaune, a noted scholar of the French monarchy.

The volume's strength is that it is the first significant research that has been published on many of the female subjects, who would be considered by the modern audience to be minor countesses and duchesses. As with any conference, the contents are dependent on the interests of the presenters and thus can leave gaps in the areas examined. The two most noticeable omissions here are Anne of Brittany and her nemesis, Louise of Savoy, both of whom were major participants in the international diplomatic arena as well as in the governance of France.

Éric Bousmar sets forth in his introduction that the conference, held jointly in Lille and Brussels, and its accompanying volume were informed by a "double perspective inspirée de la politologie et de l'histoire des femmes et de la famille" (4). In his first footnote he lists some of the important proceedings from prior conferences setting forth the aforementioned methodological framework. However, this list neglects the substantial body of research over the past twenty years found in North American and other English language publications and conferences. [1] Bousmar further elaborates on the text's premise that this is not merely a collection of biographies but rather that it is a sampling of case studies taken from political history, "une série d'études monographiques de femmes 'de pouvoir' et dans une perspective comparatiste, d'interroger les structures et les mécanismes politiques à l'œuvre" (5). This is a solid methodology as has been proven by the over twenty years of scholarly work that already exists on the analysis of women and power in the Middle Ages and Renaissance.

Included are three strong essays. Anne Marie Legeré's and Dagmar Eichberger's thorough interdisciplinary work is well known and several of their contributions are cited by Bousmar in his opening footnote. Both Legeré's and Eichberger's essays can be found in the final section of the book which focuses on the use of art and literature as political tools. Their essays on Jeanne de Laval and Margaret of Austria, respectively, present well-researched and methodologically sound analyses as to how these two early Renaissance rulers utilized the arts for political propaganda.

Jean-François Nieus's essay on Élisabeth Candavène, Countess of Saint-Pol, also effectively incorporates modern scholarly research on the feminine modalities of power in his analysis of primary source material. This study presents the changes in insignia seal designs utilized by the Countess in response to the various events in her life. It then contextualizes Candavène's choices by comparing similar choices made by other rulers and the circumstances of their lives.

The impact of these three essays is mitigated by the fact that other twenty-eight contributions to the volume do not engage with the vast body of research on women, their roles, and the public exercise of power. The exclusion of the paradigm of feminist studies, which are the cornerstone of much of the work published over the past twenty years, by the vast majority of participants of the conference, is unfortunate.

This is not to say that the other contributions are without merit. They are sketches of the subjects often in relation to specific historical events. Each is densely footnoted with archival sources. The largest section of the volume, which begins with Nieus's essay, brings to light the lives and events of fourteen little studied noble women. The footnotes of these essays serve as research guides for future scholarship, revealing where the largest portions of primary source material are housed.

The most valuable contribution of this book is to make scholars aware of previously overlooked rulers, their accomplishments, and the depth of archival resources that are available to study them. Although this volume does not further the understanding of Early Modern women and their uses of power, it certainly does expand the number of women who have been and deserve to be further examined. Old-fashioned archival "digging" and the presentation of hitherto unknown historical facts are of value, but they are only a starting point, one that hopefully future scholars will embrace and push forwards.