Richard Thomson: Art of the Actual 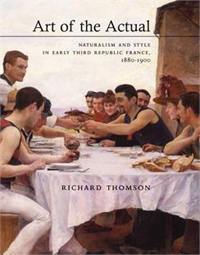 French painting of the 1880s to 1900 usually brings to mind Monet, Pissarro, Renoir, Degas, Caillebotte, Van Gogh, Seurat, Gauguin, Cézanne, Redon, artists associated with modernity and influence on early 20th century art, furthering the art of painting. Though Thomson discusses Impressionism and Post-Impressionism toward the end of the book, it is from a different perspective, as a competing style, in dialog with naturalism.

In "The Art of the Actual", Thomson writes a more inclusive history featuring artists lesser known today (Meissonier, Gervex, Lhermitte) to the almost forgotten (Laurens, Detaille, Roll, Luminais, Boutigny, Tattegrain, Béraud, Jeanniot, Friand, Dagnan, Baudouin, Buland) who in their time, had critical and popular support. Unlike Impressionism and Post-Impressionism, characterized by suggestion and abstraction, naturalism's accuracy, documentation, and appeal to a broad public were predominantly at issue. They furthered the politics and ideologies of the Third Republic, with its embrace of science and rejection of religion. Not art for art's sake, rather art requiring no sophistication on the part of the general public, but considerable accomplishment on the part of the artist.

Thomson's well written book is a rich contextual study free of jargon and theoretical bias, offering multiple perspectives. He discusses the aims of the naturalist painters, their context and reception, characterizing them as visually undemanding and intellectually facile, favoring exactitude and detail, description, not execution, for a large public, whose experiences were validated in paint; "By such means, naturalism clad itself in the egalitarian mantle that suited the Republic." (96)

The naturalists rejected the values of the academy with its idealized poses and gestures and gradually constructed a new tradition, referring back to Greuze and Manet, as painters of everyday subjects, and links to Courbet, Millet and Daumier. More could have been written here about the actual influences of those Realist painters of mid-19th century. "What had been controversial became comfortably absorbed into the ancestry of the naturalist aesthetic." (105)

The state promoted naturalism through monuments, public decorations, museum purchases, and personnel of committees. Artists pitched their work and careers, often cynically. "The Republic advocated liberty, yet impelled artists toward a quasi-consensual naturalism." (117) Some criticized naturalist painting as photographic. "But naturalism was never natural. It was always the result of craft and contrivance of studio practice." (132) In the 1890s, naturalism remained a dominating dynamic. Symbolists and figures like Gauguin and Cézanne, were isolated voices reaching small elites. Naturalism reached out to multiple constituencies.

Thomson discusses the influence of the caricatural, the populaire and the organicist on style. Caricature, whose publications proliferated, was emphatically modern, influencing avant-garde art. Cheret's posters had an impact, as did Steinlen and Willette's comic strips. For Toulouse-Lautrec and Seurat, the caricatural, with its synthetic draughtsmanship and exaggerated treatment of features, its inventiveness, and ridicule, was a reaction against naturalism. "Popular" art was a form of propaganda and control, subverting bourgeois cultural and moral norms, and evading the control of the elites. Café concerts were perceived as another threat. A counter argument from the Left was that working class culture was being degraded by the vulgarity expected by the promoters.

Naturalism was meant to be by, for, and from the people, with its emphasis on simplicity and clarity. There was fear that regional populaire was under threat from modernity. In 1880, only 20 percent of the population, some 8 million, spoke French.

Thomson regards Henri Rousseau as a populaire, a modern, artisan painter and Van Gogh, in some of his portraiture, such as the Postman Roulin. Seurat creates a stylistic alliance between the Avant-Garde and the populaire unifying the abstract and the scientific, the inclusive and engaging. The populaire was quintessentially polyvalent, incorporating contested attitudes to modernity but never establishing itself in the mainstream, where the interplaying currents of naturalism and republicanism were too strong. Negotiations between elite and pop cultural need to be acknowledged.

The idea of Organicism, drawn from science, with reference to life and growth, change and decay across a passage of time, and the idea of synthèse, belonged to the progressive intellectual ambiance that the Republic sought to promote. How might physical and collective energy be imagined and represented? One example is Van Gogh's Starry Night, a great painting of energy.

By 1890 other artists with different purposes favored a more fluid play of form evoking process, with a new awareness of the world in flux, "a new kind of art for a modern sensibility: fluid, associative, energized." (226). Carrière's tactile style emerged in late 80s, concerned with "the actuality of memory" (228), taking naturalism into new territory, related to Bergson's ideas about flux and suggestion.

Symbolists, naturalism's rival esthetic from the late 1880s, furthered Organicist forms. Monet's Creuze valley and grainstack paintings suggest time passing. Van Gogh's Les Oliviers adapt "style to become metaphorically analogous to the infinitude and indivisibility of time and nature." (234) Handling echoed the energies and flux of nature, in an unspoken aesthetic. The significance of the cultural currents - the caricatural, the populaire, and the organicist are interwoven with republicanism, naturalism and style.

Thomson discusses Degas and Monet, Seurat and Cezanne, Signac and Denis historically and contextually, seeing style as the weapon which broke the hegemony of naturalism. Rejecting objective description, new processes of looking and making were part of a style of personal expression.

Thomson notes that Degas' café concerts, racecourses, milliners, circuses - were characteristically naturalist subjects but he dropped the urban vernacular, focusing on the body in movement, ballet or women washing. "Delineating the body was only the central activity in an art dedicated to process rather than description." (243)

Degas' "polar opposite", Monet, followed a similar path moving from the 1870s riverbanks of Parisian suburbs and Gare St Lazare, which Thompson regards as social themes, to representing nature's constant animation, the vibration of light, and repetition of motifs. Monet's personal sensation took priority over the collective. Berthe Morisot's work which was a kind of naturalism, became more touch-based and less detailed.

By 1880s Impressionist painters opted for a different reading of modernity, valuing art as a creative process rather than a document, putting sensation above ideology, making images about the contingent and elusive instead of the inclusive and social.

The avant-garde distanced itself: the Neo-Impressionists and Nabi, Feneon and Denis, dismissed the anecdotal, the narrative side of naturalism. Seurat's pictorial and social subversion was by means of anonymity and fragmentation. Toulouse-Lautrec's naturalism is only partial, "a discombobulated bricolage of bodies." (266)

Thomson argues that Cezanne's and Gauguin's style resulted from their deficiencies as descriptive painters, by working around "the pervasive expectations of naturalism." (271) The point is not convincing and doesn't take into account their actual aims.

Thompson dislikes the term Post-Impressionism which fails to situate art within the larger social and cultural patterns of the decade. Some avant-garde painters engaged with tradition, especially Van Gogh, Signac and Redon.

The Republic was well served by naturalist painting, with consistency of themes like duty to care and to work, to family and memory, to the collective and to continuity not just with exactitude but also ingenuity and impact. With the Exposition Universelle of 1900 in Paris, naturalism ends.

Thomson cautions not to overemphasize the march to modernism in these two decades. Degas, Monet, Seurat and Gauguin worked against and around the dominant, insistent, deeply entrenched naturalism. There were ways out, such as Vlaminck's denial of any requirement to be exact. Matisse's Blue nude or Picasso's Desmoiselles d'avignon have a kind of violence and aggression, breaking with the naturalist aesthetic and values. Naturalism was the enemy, not academicism.

Thomson presents the main theme of the book: that naturalism was the dominant aesthetic in French visual culture 1880-1900, with clarity and conviction. This book is an admirable and useful contribution to art history of the period.