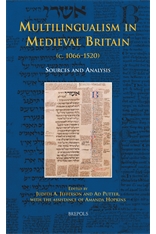 This book is a collection of sixteen essays edited by faculty members from the English department at the University of Bristol, with the assistance of Amanda Hopkins, a graduate of the same university and at present a Tutor at the University of Warwick. The Introduction by the two editors gives an overview of the field and is followed by a very comprehensive bibliography.

The publication arose from a conference on the theme of "Multilingualism in Medieval Britain" which took place at Bristol University 11-13 July, 2008. This was the last conference in a cycle of conferences on the theme of "Multilingualism in the Middle Ages", a collaborative and interdisciplinary research program sponsored between 2005 and 2008 by the World University Network and the Universities of Bergen, Bristol, Leeds, Madison Wisconsin, Manchester, Oslo, Penn State, Utrecht, and York in association with Brepols Publishing. Among the other conferences sponsored was "The French of England: Linguistic Accommodation and Cultural Hybridity c. 1100-c. 1500" held at the University of York, 13-16 July 2007. The French of England project and its publications, initiated by Jocelyn Wogan-Browne - one of the contributors to the present volume - and Thelma Fenster of Fordham University have done much to attract attention to the specific and often ignored situation of French in the Medieval British Isles. The present volume takes a wider point of view, including a useful discussion of the role of other languages in Medieval England: Old Norse (Dance), Cornish (Blom), Welsh (Blom and Russell) and Hebrew (De Visscher).

The volume provides an almost dazzling wealth of material, which at times can be perplexing for the reader. The title seems to indicate that the book is meant for a wide readership including historians of Medieval Europe and those interested in socio-linguistics and historical linguistics but many of the articles deal with very specialized topics, four of them literary (Dance, Jefferson, Griffiths, Summerfield). One can regret that the title of the volume does not clearly reveal its inclusion of literature as a source.

While multidisciplinary studies can certainly be fruitful and it is commendable not to restrict the discussion about languages in medieval Britain to the role of Anglo-Norman, one can wonder if it has been truly appropriate to include such studies as Judith A. Jefferson's "Scribal responses to Latin in the Manuscripts of the B-Version of Piers Ploughman" (195-210) and "'Divers of Language': The 'Macaronic' Glossing of Skelton's Speke Parrot" by Jane Griffiths (211-224). Those two valuable contributions clearly aim at an audience already very familiar with the subject matter. Jefferson does not give a table of the manuscripts under consideration but merely refers to the Kane and Donaldson edition of Piers Ploughman (note 5, 196) which all readers interested in multilingualism in Medieval Britain cannot be expected to have at hand. It might also be difficult for experts of Piers Ploughman and of John Skelton to have access to readings which have not been referenced in Library catalogues, probably through lack of space, as the book is already now listed in WorldCat under 9 subject headings.

Haruko Momma's title, "Narrating the Battle of Hastings: Multilingual Britain and the Monolingualism of William of Malmesbury" (225-239) could also have usefully included a mention of Wace as her insightful discussion of "phoney bilingualism" in the Roman de Rou is one of the most enjoyable parts of the volume.

The collection of articles includes many other highlights. The forms of address which evolved in charters in the various parts of the British Isles to deal with a linguistically and ethnically diverse population are masterfully analyzed in Richard Sharpe's essay (1-40). While exploring the realities of a Welsh XIIth century ruler's language competency Paul Russell gives a vivid account of the interactions of English kings with the local population (79-80) and with the role of interpreters (81-82). Similarly, besides a technical discussion of manuscripts Eva De Visscher brings light to the interaction of Gentiles and Jews and points out the general use of the Hebrew alphabet (93). Richard Ingham uses a remarkably wide array of data to study the usage of the French definite article with English names in Latin charters. He compares it with other cases of language-mixing in Continental and English sources and applies the concept of code-switching to provide an explanation (109-118). The current trend towards a consideration of "non traditional" sources for the study of medieval languages finds an echo here as well as in Laura Wright's discussion of mixed-language accounts (123-136) and in the articles by Alan J. Fletcher and Herbert Schendl about Macaronic sermons (137-151; 153-169).

Considerations about the entertaining potential of representations of multilingualism (Thea Summerfield, 253) will interest specialists of the performing arts while students of socio-linguistics will find much to gain from Cathy Hume's discussion of the Medieval ranking of languages which led to opposition to the translation of the Bible into vernacular languages (273-292). Special reference to the use of language by women is made in Jocelyn Wogan-Browne's exploration of the complexities of the intercalation of languages in a devotional text used in a nunnery (171-194) and in Elizabeth Darnley's analysis of references to the vernacular as feminine in nature (259-272).

Medievalists of the various backgrounds and interests mentioned above will be well-advised to take a close look at this book as it has much to offer that would be easy to miss.