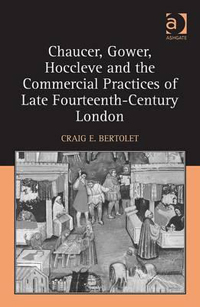 In this volume, Craig E. Bertolet examines the commercial society of late medieval London through the lens of the poetry written by three of its most prominent residents, Geoffrey Chaucer, John Gower and Thomas Hoccleve. Through the use of textual analysis, archival material and sociological and economic theory, Bertolet argues that the work of these authors reveals a preoccupation with the inherent instability produced by commerce during this period. In particular, his study utilises Pierre Bourdieu's concept of habitus, which describes how the behaviours and practices of a community become codified over time to form unwritten social conventions. This idea informs Bertolet's view of the 'commercial polity' of fourteenth-century London, as a society in which everything, from time to labour and human relationships, has become commodified.

This idea is examined over the course of five chapters, each examining a different aspect of medieval trade and commerce, such as buying and selling, credit and debt, shopkeeping, and hospitality. In addition to the narrative accounts present in the texts of the authors mentioned above, Bertolet draws extensively on historical documents, such as legal material and the records of the various London guilds, in order to provide evidence for the daily commercial practices of the city. A number of themes emerge from this analysis. One of these is the perceived tension existing in this period between, on the one hand, the individual desire to make money from trade, and on the other, the 'common profit' of the realm. John Gower's poetry reveals his opinion of the potential risks of economic competition, in particular that the desire for individual gain inevitably led to unscrupulous dealing and fraud; as he states in the Mirour de l'Omme (1376-79), 'fraud ruins the city, taking the goods of his neighbours, because he does not care in what guise [...] he seeks his own gain, and he despises common profit' (author's translation, 39). Medieval economic theory held that the needs of the community outweighed those of the individual, and therefore that fraud encompassed not only such crimes as deception regarding the quality of a product, but also practices that are considered acceptable today, such as usury (loaning money at a rate of interest), and taking advantage of scarcity in order to sell something at an inflated price. These practices were seen as damaging to the community because they resulted in discord and social unrest; most notably, in this period, the disputes between the London guild factions headed by John of Northampton and Nicholas Brembre in the 1370s and 1380s.

Another key theme of Bertolet's book concerns the connection between money and status in the late medieval period, or in Bourdieusian terms, the process whereby material capital was converted into social capital. This was in some respects a circular process, in that the successful negotiation of credit and debt in order to cultivate the appearance of wealth could in fact result in its possession; thus social capital could in turn be converted into material capital. Bertolet describes a number of examples in the literature of the period that illustrate how commercial individuals attempted to emulate the habits and appearance of their social superiors in order to promote an image of success, and thus attract potential customers. Many of Chaucer's pilgrims in the Canterbury Tales wear clothing or carry possessions that were designed to display their wealth and social standing; for example, the Wife of Bath wears red stockings (red being the most expensive dye), and the Merchant a hat made from beaver fur, which was becoming increasingly rare. However, if the individual failed to live up to these displays of material wealth, their social capital would quickly disappear. The government clerk Thomas Hoccleve's account of his misspent youth, La Male Regle (1405-06), describes how the flattery of the Thames boatmen in calling him 'maistir' led him to spend money he could ill-afford on their services; however, he was fully aware that he did not possess the means to sustain this image in the long term.

The study of commerce in medieval literature has been a growing academic field in the last ten years, with notable works being produced by authors such as Roger Ladd and Lianna Farber. However, whereas Ladd's work focuses primarily on literary representations of mercantilism, and Farber's on the theoretical debates surrounding medieval economics, Bertolet's study is broader in scope. His skilful use of both historical and literary sources allows him to engage with the practical issues affecting medieval commerce and the daily life of the individuals involved, and by means of the concept of habitus he is able to identify the social codes and beliefs that underpinned these behaviours. As Bertolet notes, there is an inherent risk of anachronism in the application of modern socio-cultural and economic theory to medieval source material; however, he is careful to stress the differences not only between medieval and contemporary economies, but also between London and the rest of the country during this period.

In keeping with his Bourdieusian approach, Bertolet's 'commercial polity' is all-inclusive; in his view, every member of medieval urban society was a commercial agent. The argument that, by 1400, London was 'a society given over entirely to sales' (3), in which almost every aspect of human interaction was primarily motivated by the desire for material gain, is on occasion somewhat overstated, leaving little room for the role of religious, aesthetic or intellectual values in medieval society. This is perhaps one reason behind the lack of discussion of the growing role of the mercantile classes during this period as patrons of art and literature, or indeed, as an audience for the works of Chaucer, Gower and Hoccleve themselves. It is also perhaps odd that a study of literary representations of trade should give little attention to the commodification of literature itself, or of books as status objects; Hoccleve, as a copyist both of his own works and those of other authors (including Gower), played a role in the London book trade, and some discussion of this might have been a useful addition to this otherwise comprehensive volume.

Overall, however, Bertolet creates a persuasive argument for the fourteenth century as a turning-point in the development of London's commercial culture, which created social and cultural tensions reflected in the literature of the period. His book offers an innovative re-assessment of three of the most important writers of late medieval England, making skilful use of documentary material in order to situate their work firmly within its socio-economic context.