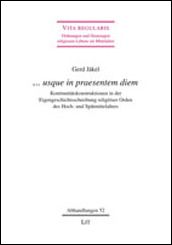 This is an engaging and important book for anyone interested in the history of religious orders in the Middle Ages and the ways in which they constructed their histories. Gerd Jäkel takes his departure in the fact that each order has in the course of time found it necessary and useful to record its history, but the chronicles of orders have been constructed in many different ways. The greater part of Gerd Jäkel's monograph presents accounts of the Dominican and Franciscan Orders, and here texts are arranged around the leaderships of the orders in terms of masters general and sometimes also provincial generals. Most chronicles have a chronological framework and some show the spread of the order in geographical terms. An example is the Dominican Gerard de Fracheto, who in his Chronica Ordinis introduces the masters general and reviews the content of chapters general. On the whole the Dominicans seem to have gotten off to an earlier start in the thirteenth century than the Franciscans, who of course had their controversies, especially about brother Elias as master general and the debate about poverty. The Franciscan Thomas of Eccleston in his account of the coming of the Friars Minor to England emphasized the continuity of the order on the basis of the generals but also provided a geographical overview of the spread of the Franciscans in one area.

For what he calls the period of consolidation in the fourteenth century, Jäkel provides three Dominican and two Franciscan chronicles, which are more or less all based on the masters general, but where there also are found listings of provinces and houses. The period of reform, the fifteenth century, is richer in content: four Dominican and four Franciscan chronicles, and here there are imposing attempts at recounting long histories and showing how the orders remained faithful to the intentions of their founders.

Jäkel's observations are made in a careful and pedagogical manner, with many quotations taken from the sources, and at times I find his method almost too cautious in the way he repeats his main points, but I can understand that he felt obliged to justify his assertions. At the same time his presentation of the almost standardized Dominican and Franciscan chronicles is a necessary point of departure for the much more varied landscape apparent in narratives of other orders: the Augustinian Hermits, Carmelites, Carthusians, Grandmont, Cluny, the Benedictines of the Bursfelde Congregation, and the Teutonic Order.

The Augustinians had a problem in tracing their origins back to Saint Augustine and approached the problem in different ways, either by skipping the eight centuries after Augustine or by trying to close the gap from the fifth to the thirteenth centuries. The Carmelites were bound to a Biblical narrative that provided inspiration but also historical problems. The Carthusians had to account for growth and change from a complex foundation story and later developments when the houses moved away from the wilderness to cities. The Cluniac chroniclers had to find a structure for what never really became an order but whose abbots had immense influence on the history of the Church at large. As for the Benedictines, the lack of structure of this order before the thirteenth century invited the chronicler from Erfurt, Nicolaus of Siegen, to attach his story to the broader one of the history of Western Christendom, and he seems to have done so with some success. Jäkel devotes the longest section of his analysis to Nicolaus, and he richly deserves the fresh attention given him. The Bursfelde Congregation was seen by Nicolaus in terms of the larger reformation of the Church in the fifteenth century. Finally we are given Peter of Dusburgs chronicle of the Teutonic Order, also with a complex history and one that became a history of Prussia as a construction of the story of the knights and their conquests.

In his summary of the chronicles, Jäkel sees six types of construction: according to the succession of officers (the most common way of telling an order's history); performative continuity in terms of the achievements of some of the outstanding members of the order, whether in terms of holiness, learning or other characteristics; spatial continuity, in tracing the geographical spread of the order's houses; temporal continuity, linked especially to the rhythm of the order's regular meetings or general chapters; orientation outside the institution, as to the papacy; finally the overall view based on the foundation and mythical origins of the order, especially important for Carmelites and Augustinian Hermits.

In a final overview of "Ordenschronistik" and "Institutional history", Gerd Jäkel makes use of a number of contemporary medieval historians who have considered this genre, which can make use of gesta as a literary form, especially the gesta episcoporum. A final suggestion is encouraged by the work of Gert Melville, who has inspired generations of research into the meaning and structure in medieval religious life: the early medieval libri pontificales may have provided a pattern that inspired these chroniclers.

I learned a great deal from Gerd Jäkel's thoughtful and clear analysis of the sources, and I am delighted that he at the end of the monograph related the monastic chronicles to a larger medieval literary context. As a Cistercian scholar, I naturally wish he had included one or two Cistercian chronicles, for certainly they would fit into the patterns he here traces, but the Cistercians by 1200 in their chronicles showed concern that their order had left behind the fervor of early times. As a Danish historian, I wish that Jäkel had looked more closely at the Danish Franciscan chronicle of the sixteenth century (124-6). The author is not anonymous, as Jäkel states, but is Peder Olsen, a Franciscan antiquary who was allowed after the Lutheran Reformation to continue with his historical writings. A much better text of the chronicle than the one Jäkel uses was edited by M. Cl. Gertz in Scriptores minores historiae danicae medii aevi, vol. II (Copenhagen 1922, reprinted 1970).

With so many chronicles for which to account, it is understandable that one of them is not adequately treated. In spite of this small blemish, Jäkel has provided a useful, thorough and convincing study and I hope he goes on to give us many more of medieval life and its multitude of expressions.