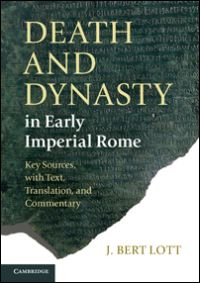 This handsomely produced volume provides the Latin text, English translation, and succinct historical commentary on an important set of texts relating to the commemoration of four princes of the Julio-Claudian dynasty who all died young: Lucius Caesar and Gaius Caesar, grandsons and then adopted sons of Augustus, Germanicus Caesar and Drusus Caesar, respectively the adopted and natural sons of Tiberius. Their untimely deaths in 2, 4, 19, and 23 CE were widely mourned across the Roman Empire and removed on each occasion a designated successor to a father who was wielding supreme autocratic power as princeps of the Roman state. The Roman senate took the lead in recommending how they should be commemorated, to ensure that their memory should remain alive long after the official periods of mourning had ended, and these recommendations were then confirmed by laws (leges) passed by vote of the Roman citizen assembly.

Lott's volume is aimed at advanced undergraduates and graduate students taking courses on the history of the early Principate or Latin epigraphy. Those interested in Roman historiography, especially Tacitus, will also benefit much from the volume, since the documents (here nos. 3-6) that stemmed from Germanicus' death and the subsequent trial of Cn. Calpurnius Piso, accused of poisoning him, overlap in intriguing ways with Tacitus' narrative of these events in Annals II and III. (A.J. Woodman's translations of Tac. Ann. 2.43, 53-84 and 3.1-19 from his 2004 Hackett translation are helpfully reproduced in ch. 4 [318-38].) Lott very conveniently gathers together what survives in the form of inscriptions on bronze plaques or marble slabs of various senatorial and municipal decrees and statutes of the Roman people that contributed to the processes of remembrance of these prematurely deceased princes: (a) the decrees passed in 2 and 4 CE by the town-council of the colony of Pisae (Pisa) concerning the honours to be paid the deceased Lucius and Gaius in light of the Roman senate's recommendations on these matters (nos. 1-2); (b) sections of the senatorial decrees of December 19 CE regarding Germanicus' honours, preserved on the bronze Tabula Siarensis from S. Spain and a fragmentary bronze plaque from Rome (CIL VI 31199), and of the law, the lex Valeria Aurelia, sponsored by the consuls of 20 CE, M. Valerius Messalla Messalinus and M. Aurelius Cotta Maximus Messallinus, and passed by the Roman people confirming these arrangements, partially preserved on the Tabula Siarensis, the Tabula Hebana from Etruria, and the Todi fragment (nos. 3-5); (c) the senatorial decree produced on 10 December 20 CE outlining the senate's verdict and sentence in the trial of Cn. Piso, preserved on two well preserved bronze plaques from Baetica in S. Spain and on at least six other very fragmentary plaques from S. Spain and now Germania Superior (no. 6); and (d) the fragments of a senatorial decree laying down commemorative honours for Drusus Caesar in 23 CE, preserved on a bronze plaque from Rome (CIL VI 31200), and further fragments of the law confirming these honours, preserved on the Tabula Ilicitana from Ilici in Baetica (nos. 7-8).

For each of these inscriptions, Lott helpfully presents a "diplomatic text", conveying what is actually preserved on the stone or bronze; an edited text, expanding abbreviations, correcting errors in the carving of the text, and filling gaps where possible; and his own English translation. He includes photographs and line-drawings of all the surviving texts, most of excellent quality, though some of the images of the Pisae decrees (Figs. 2.1-8) are rather murky. In general, this is a sound editorial approach that will allow students to compare the diplomatic and edited versions of these texts and hence to see for themselves how epigraphers work from often lacunose inscriptions to produce more comprehensible texts.

Lott's aim was never to produce new texts of these inscriptions; he was content to rely on earlier editions: those of A.R. Marotta D'Agata for the Pisae decrees, A. Sánchez-Ostiz for the Tabula Siarensis, M.H. Crawford for the Tabula Hebana and Tabula Ilicitana, and W. Eck, A. Caballos and F. Fernández for the S.C. de Pisone Patre. Throughout one misses a full apparatus criticus, which would have revealed the speculative nature of some of the textual reconstructions reproduced. For the Tabula Siarensis, for instance, Lott follows the 1999 edition of Álvaro Sánchez-Ostiz, which varies quite dramatically in places from the restorations Julián González proposed in his editio princeps of 1984 (ZPE, 55, 55-100) and in the later edition that he published - subsequently to Sánchez-Ostiz's - in his Tácito y las fuentes documentales: SS.CC. de honoribus Germanici decernendis (Tabula Siarensis) y de Cn. Pisone patre (Seville, 2002, 299ff.), a work not cited by Lott, and from the various conjectures that W.D. Lebek proposed in a series of articles published in ZPE between 1986 and 1989, which are duly listed in Lott's bibliography. Lott occasionally makes brief comments about textual matters in his generally succinct and helpful commentaries on each of the documents (174-317 = ch. 3), but despite his concern to include restorations to make these texts as comprehensible to students as possible, his statement (54) that his edited texts incorporate "current scholarly thinking on corrections and restorations" is somewhat disingenuous since it conceals the degree of scholarly dispute that still exists over the best restorations of parts of these crucial texts.

Similarly, in his translations it is problematic that Lott does not indicate by means of square brackets where the text has been restored by editorial intervention. Unless they remain alert to this, inexperienced students working from the translations alone may use material that is in fact an editorial restoration as evidence on historical issues. They will need to guard carefully against that dangerously delusional practice of writing "history 'from square brackets'", to borrow Ernst Badian's phrase (cf. ZPE, 79, 1989, 59-70).

Lott is also the innocent victim of bad timing, since an important discovery occurred too late for inclusion in his work. In 2012 Mafalda Cipollone published a new fragment of a bronze plaque, perhaps from Tifernum Tiberinum in Umbria, now in the collection of the Museo Archeologico Nazionale dell'Umbria in Perugia, that evidently includes part of the senatorial decree laying down posthumous honours for Germanicus (Bollettino di Archeologia Online, 2, 2011/2-3, 3-18; Epigraphica, 74, 2012, 83-107; for the findspot, cf. Epigraphica, 75, 2013, 502). The latter part of line 10 and lines 11-22 of this new fragment overlap with the Tabula Siarensis and CIL VI 31199a, but the first nine lines and the start of line 10 are completely new, forming part of the motion (relatio) that enabled the senate to discuss Germanicus' honours. Though lacunose, they clearly refer to a number of the valuable actions that Germanicus had undertaken "without concern for his own health" ([si]ne respectu valetudinis sua[e], line 2) and with "the most laborious care" (laboriossimaque cura, line 5) during his overseas mission to the East in 18-19 CE and perhaps allude to his status as Tiberius' "helper" ([adi]utor, line 1). For the sake of completeness, it would have been helpful to list all known fragments of the S.C. de Pisone Patre, indicating the fact (which here goes unmentioned) that one copy is now known from outside Baetica, specifically from Genava in Germania Superior (AE 1997, 1065, with J. Bartels, Chiron, 39, 2009, 1-9), and to mention that another fragmentary copy of the lex Valeria Aurelia was published in 2000 from Carissa Aurelia (modern Bornos, prov. Cádiz) also in Baetica, which overlaps with text already preserved on the Tabula Hebana and Tabula Siarensis (AE 2000, 275, with J. González, AEspA, 73, 2000, 253-7).

These are not easy texts for inexperienced students to handle. Not least for clarifying the distinction between the epigraphic texts and the original documents that lay behind them, Lott's edition will be welcome for undergraduate and graduate teaching purposes. So long as instructors make it clear that not all restorations are as solid as Lott's volume may make them appear, Death and Dynasty in Early Imperial Rome will prove a useful addition to the literature to stand alongside Alison Cooley's exemplary teaching edition of the Res Gestae of the Deified Augustus, published in the same series in 2009.