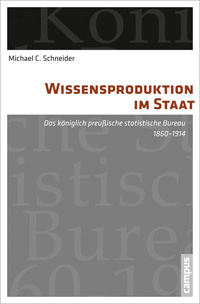 The history of statistics and quantification has emerged over the last thirty years as a little growth industry, partly as a topic in the history of science, partly in social, economic, or cultural history, and often in historical writing from outside the historical discipline. Until then, it was mostly social historians and social scientists who, having taken an interest in the sources and impacts of their numbers, were sometime moved to write about their history. More recently, especially in the United States, historians have examined significance of the census for ethnic classification and ethnic identity in America and elsewhere.

Michael Schneider's book is something rather new, and makes only light contact with recent historical writing on statistics and censuses. He is interested, as his title suggests, in knowledge and the state, or more precisely, knowledge in the state. A statistical bureau is a state agency. All kinds of state agencies collect and publish numbers, the residues of their work of taxing, inspecting, policing, regulating, educating, insuring, provisioning, incarcerating, and so on. Rather few state bureaus collect statistical information as their central task. A census bureau would be the prototype. Statistics of prices, wages, and economic activity are other examples. The Prussian Statistical Bureau had a wide remit, but the census was central, and Schneider gives most of his attention to it. He wants to understand how a knowledge agency got on within an entity, the government, whose activities are all bound up with administration and politics.

His theoretical perspective, like that of so much recent German writing on the uses of social knowledge, comes from Nicolas Luhmann's writings. Luhmann, in my view, is a uniquely bad choice for this role, unless we are looking above all for negative conclusions about the role of information and inquiry. Luhmann subdivided the world into little compartments, which we might reasonably speak of as Fächer (also the word for academic disciplines), and which he referred to as functional systems. This has the ring of the primordial, leading us back to Talcott Parsons and to a sociology that was obsessively concerned to protect social science from state interference, and so insisted that it stood intrinsically outside of politics and administration, just like natural science. Almost no historians or social scientists writing these days about science, be it physics or biomedicine or anthropology, find a deep structural divide of this kind. Schneider's frequent and repetitious invocations of Luhmann stand for a pervasive weakness in the formulation of the argument.

But Schneider is also a real historian, skilled at finding, reading, and interpreting sources. The picture of statistics in the state that emerges from the book is much more interesting than a portrait of isolated functional systems caught up in a dialectic of scientization (Verwissenschaftlichung) and bureaucratic or political resistance. States had their systems of knowledge and information centuries prior to the arrival of any special class of people called scientists or scholars. It is just because science and state run together, just because science has its politics, and states their indigenous forms of expertise, that the relations of knowledge to the states in which it is cultivated and put to work can be so tense and revealing, so contradictory. Schneider has worked above all in archives of the Prussian state, which offer abundant insights about the shaping and the uses of Prussian statistics under the pioneering director Ernst Engel and his successors. High state officials were deeply interested in the work of the statistical bureau, including on such topics as the health of their populations, their evolving religious affiliations, their occupational structure, their birth and death rates. These officials were convinced that the prosperity and power of the state depended on such variables. By the mid-nineteenth century, they could not imagine taking care of politics and administration without the benefit of such knowledge.

Engel was perhaps the most prominent and most admired statistical officer of his age. He had definite ideas about the role of statistics for government, and these were not unduly modest. He was not shy about intruding into issues that ministers of the interior, or indeed the chancellor, thought of as their own affair. He did aspire, as Luhmann would expect, to a high degree of independence from his political masters. But he also saw the work of statistics as dense with political significance. This point emerges very clearly in Schneider's book. Engel's ambitions were not limited to the collection of high-quality statistics. They extended also to publicity, to Öffentlichkeit, or "public sphere", a word closely associated with Jürgen Habermas and with a very different relation of knowledge to politics from Luhmann's. There was a moment in 1867 when Bismarck became deeply annoyed with Engel. He was not objecting to the collection of these numbers, nor was he trying, as political leaders sometimes to, to manipulate them. He simply argued that it was not the role of a statistics director, writing in an official publication, to editorialize about how much should be spent on the Army.

Engel hardly engaged at all with the mathematical issues that had become so central to the discipline of statistics by the mid-twentieth century. Yet he had excellent technical skills of another kind, tied to gathering, processing, and presenting information. Although he seemed on occasion like a thorn in the flesh of his political superiors, they kept him on. They even supported his "statistical seminar", whose purpose was to train up state statisticians to provide statistics for the cities, the formerly independent states, and for the Reich, whose statistical bureaus only gradually took over from the Prussian one the leading role in Germany. Engel's name is now associated with a "law" about expenditure on food in relation to wealth. But his most important contribution to statistics may have been his adoption about 1870 of individualized Zählkarten or counting cards, which gave the Prussian census unprecedented flexibility in managing its data. They were especially useful, as Schneider points out, for correlating two or more variables along the axes of a statistical table.

The incompatible functional spheres that Schneider posits do not, by my reading, reveal themselves in this book. But there are tensions enough, as well as historically important relations linking politics to knowledge and to social history. Schneider is not the first to study quantitative practices in relation to states and administration, but his use of bureaucratic and administrative sources to unpack this relationship has no parallel. He offers here not just a detailed examination of official statistics, but an important new historical perspective on states and information.