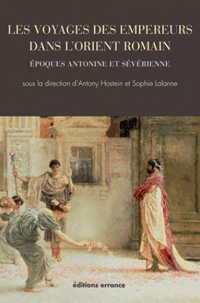 The first thing to catch the reader's attention is the book's professional and attractive presentation. The quality of the publication is excellent; in particular, coins and maps are reproduced in great detail with many in colour (89-96; 220-7). Some readers will not appreciate the editors' decision to use endnotes. The volume contains many learned and superbly detailed papers with the result that one must refer to the notes often and in significant detail; a system of footnotes may have made the book easier to read. The book is divided into four sections: the first looks at the Emperor's journey to and from the East; the second examines the Emperor's itineraries and actions when travelling in the East; the third investigates how the Emperor was received on his travels; the final section looks at civic benefactions given out by the Emperor on the journeys. The book has neither a general bibliography nor indices.

It is very clear from the introduction that the papers stem from the work of Fergus Millar and Helmut Halfmann (5), who developed the idea that the Emperor and his retinue was the centre of the Empire and that his itinerancy was an important part of imperial administration. The papers here adhere strongly to this tradition with the possible exception of the otherwise excellent contribution by Laurent Bricault. Bricault's article "Antoninus à reculons. Sur les pas d'Élagabal", discusses the journey Varius Avitus Bassianus, later Elagabalus, took to Rome after his succession in Emesa (83-150). The journey is investigated in impressive detail with reference to literary and numismatic evidence. This, however, deviates from the examination of the itinerant Emperor, who travels habitually as part of his role as imperial ruler; Elagabalus' journey was not part of a program of travel by which he ruled the empire but rather a particular trip made upon the moment of his accession.

The volume takes a narrower perspective than Millar and Halfmann, limited to the Antonine and Severan periods and the eastern half of the Empire. Hostein and Lalanne convincingly argue their case for choosing these limitations (6-7). Whilst some interesting comparisons could have been made with other areas or time periods, the restrictions lead to significant interaction and overlap between papers leading to interesting and manageable conclusions. For instance, four papers deal with Marcus Aurelius' trip to the East in 175-176 in detail and section four is entirely dedicated to an analysis of Hadrian's relations with Greco-Roman cities.

The adherence to the tradition of Halfmann's work is clear from the subject matter of the book; few papers address issues that do not appear in Halfmann's Itinera principum. Contributions by François Chausson, Benoît Rossignol, and Anne-Marie Favreau-Linder discuss issues not treated by Halfmann. François Chausson's "La fausse immobilité du Prince. Remarques préliminaires sur la présence du Prince à Rome et dans ses environs" addresses an interesting and relevant question: what does it mean for the Emperor to be mobile (17-36)? He concludes that even when in Italy or Rome, the Emperor travelled, often seasonally; the centre of the Empire was "une notion mouvante" (24). Chausson perhaps does not go far enough to identify the centre of the Empire as a moving concept; he places too much emphasis on the interaction between the Emperor and Rome during these travels. Benoît Rossignol's article "Inter synfonias et cantica: notes sur le voyage de Lucius Verus de Rome à la Syrie (et retour)" discusses Lucius Verus' glorification of the Greek past during his journey to the East (37-64). Anne-Marie Favreau-Linder's contribution "Dans le sillage de l'Empereur: la place des sophists dans les voyages" uses Philostratus' Lives of the Sophists to determine the role of Eastern sophists during the imperial visits of Hadrian and Marcus Aurelius (193-204).

The majority of papers, therefore, discuss issues central to Halfmann's Itinera principum. This does not mean, however, that the book tacitly follows Halfmann's work. The volume presents much that deviates from or directly contradicts Halfmann. For instance, Michel Christol and Thomas Drew-Bear propose an altered itinerary for Marcus Aurelius' journey in 175-176 (144-5). Christol argues for a different chronology for Caracalla's journey of AD 214 (155-68). Other authors seek to provide a re-evaluation, such as Laurent Bricault, who addresses unpublished numismatic evidence (83-105). Antony Hostein seeks to redress an imbalance between literary and numismatic sources in the study of Caracalla's visits to Pergamon and Laodikeia (205-27). Ewen Bowie's excellent papers on Hadrian's relations with Smyrna and Ephesos challenge many assumptions and employ little-known epigraphic sources (247-96). In this way, the volume can be characterised as an update of the rather dated Itinera principum.

Les voyages des empereurs dans l'Orient Romain is a well-produced and well-written volume. The book updates and expands on issues that arise from Helmut Halfmann's Itinera principum from different perspectives and using new evidence, especially lesser-known epigraphic and numismatic sources. The treatment of the subject is by no means comprehensive, but this should not be expected from an edited volume of conference papers. This work should be important for any specialist studying the position of the Emperor in the Roman world. As the papers presented here are often very specialised and there is no general bibliography, the volume is likely to be less useful for a non-specialist audience.