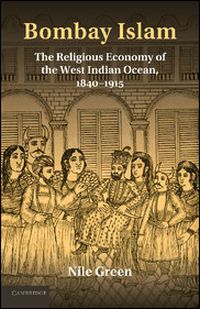 To compose this book it took Nile Green, Professor for History at the University of California and one of the most renowned scholars on the diverse history of the Islam in South Asia, nearly ten years. Initially he had planned another project, but let himself be pushed by the sources to an inter-regional study of the wide religious market spreading from Bombay to Durban or Teheran. From the first page onwards, Green not only provides a piece of profound historic research but takes the reader on a trip from the dockyards and cotton mills to the saints' shrines and bookshops of Bombay to Hyderabad, Gujarat, Iran or South Africa. Thereby he enriches his narrative language with anecdotes, stories of myths and miracles from 19th century accounts. The book's 327 pages are divided into seven chapters out of which the second and fourth chapters are considerably longer than the others.

Green begins by introducing the model of "Religious Economy" which shows the relations of large numbers and varieties of religiosity and combines the sociological, economical and religious spheres within a community. In this rather sociological than economic model the multidisciplinarity of Green's work is rooted: "the complexities of religious activities are like commercial activities and interactions in their capacity to be rendered intelligible through the interpretive model of economy" (9). For example, Green speaks of "Islams", competing "trends" within the religious market like the - in Bombay dominating - Customary (sufistic) Islam, Reformist or Counter Reformist Islams (19).

The first chapter is titled "Missionaries and Reformists in the Markets of Islam" and is meant to display the grounds of Bombay's evolving religious market. Green argues that the arrival of Christian missionary societies triggered the establishment of defensive reformist movements and organizations within other religious communities out of which a competitive market arose. Green highlights the adoption of religious printings, networks of volunteer associations and the idea of an individual conscience to choose a religious identity.

From the limited number of associations and madrasa-networks founded by members of the middle class Green shifts the interest to the masses of laboring Muslims with a rural background in the second chapter entitled "Cosmopolitan Cults and the Economy of Miracles". As more and more Muslims migrated from the backcountry to Bombay also the number of shrines and customary firms increased causing a reproduction of familiar settings in a new environment. Thereby not only new shrine firms emerged but also old pilgrimage centers were "franchised" to Bombay (49). This development helped on the one hand to integrate migrants and on the other lead to extreme diversification and more to communitarian differentiation than to a uniform Muslim community. What can be interpreted as cosmopolitanism also resulted in communal riots at the end of the century .The shrines, mostly situated in densely populated and contested areas, illustrate the moral conflict between the city's inhabitants. In academics this is otherwise interpreted through religious processions and riots. Green devotes one of the longest chapters to the majority of Muslim workers and tries to widen the view on that period of time. In doing so he also calls attention to the focus of the dilemma for which only few scriptural sources exist: "we must rely on oral traditions in which the legends of saints are preserved" (51).

With the third chapter - "the Enchantment of Industrial Communications" - Green starts to expand the view from the religious economy within the city to the oceanic and hinterland economy. Thereby he focuses on two technological developments which enabled the export of Bombay's religious products: low costs of printing, which allowed Bombay to become the biggest Muslim printing centre along the Indian Ocean's costs, as well as the domination of steamship networks on the ocean, which allowed the distribution of books and mobilization of religious persons to distant places. But although printing and steamships are most often thought to be linked with modernism and reformism, Green argues that all participants in the religious economy were able to use the new technologies which means that more hagiographical, entertaining and miracle-advertising literature than moralizing or scientific literature were distributed (91).

The book's longest chapter is titled "Exports for an Iranian Marketplace" and turns the gaze towards the vivid exchange between Bombay and Iran. Although the subtitle may indicate a rather one sided process, Green in fact emphasizes a reciprocity. Bombay, the place of the Iranian Consulate in India, had a significant Iranian population including diplomats, merchants and Shīʿī ʿulamāʾ as well as members of new religious movements like Bābism/Bahā ʾī. Nevertheless, rich Zoroastrian merchants from Bombay were the pioneers to bring associational structures and reformist ideas to Iran. Green defines Iranian Sufis travelling constantly between Bombay and Iran and sometimes beyond, as the mediators describing their impressions of Bombay to their Iranian audience in travelogues. There are for example the travelogues of Hajji Pirzada - portraying both the market of customary Islam and the merits of technology - or of Safi Ali Shah who completely ignored the industrialization and focusing only on an "India as the bastion of custom" (138). Green uses Ali Shah's travelogues as his main sources which helps him once again to highlight Bombay's status as a printing center allowing some saints to gain popularity in Iran and Iraq through their publications. This leads over to the next chapter "The Making of a Neo-Isma'ilism." Green concentrates on one specific product of the religious economy: The Neo-Isma'lism of the Agha Khans. One example is the second Agha Khan, Agha Ali Shah (d. 1885), who resided in Bombay and patronized Safi Ali Shah. Green argues that Bombay's religious economy with its already described technological achievements enabled the Agha Khans to centralize, connect and lead the disparate Isma'ili communities to its new centre in Bombay. Also this project was more successful in India than in Iran "it was a mission that was near-identical to that of the city's Parsi and Christian firms" (156).

In chapter six - "A Theology for the Mills and Dockyards" - Green turns back to the continental hinterlands of Hyderabad and the Konkan coastal area supplying Bombay's textile mills and dockyards with a social entity that Green calls "a Muslim industrial labour force" (179). For an example Green relies on the scriptures of the Hyderabadi Sufi Habib Ali Shah. In contrast to the theology of Reformist movements, Habib Ali favored a hierarchy of saints and a theology of intercession which promised a needed patronage for laborers.

The seventh and last chapter entitled "Bombay Islam in the Ocean's Southern City" is dedicated to the exchange between Bombay and Durban. Of course the most popular traveler between the two "colonial" cities is not forgotten: Mohandas Gandhi. Green analyses Gandhi's miraculous "transformation from a barrister into a mahatma" (208) as only one story of religious transactions. Muslim travelers from Bombay, like Habib-Ali's disciple Ghulam Muhammad, found a likewise highly competitive setting around the immigrating Indian laborers in Durban which resulted in a reproduction of Bombay's religious architecture, narratives and imaginations (234).

Green let his elaborations end in 1915 when homogenizing trends like Pan-Islamism, the Muslim League or the Khalifat-Movement rose to popularity. In contrast to this later development, he has shown how the religious market of the 19th century Bombay with its religious firms, printers and steamships led to an immense pluralization and competition - within Islam and in connection to other parts of the city's religious economy like Christianity, Hinduism, Zoroastrianism or Judaism. It might appear a little strange in the beginning to use economic terms for a study on religion but still the concept of religious economy helps Green to overcome dichotomous models of colonial vs. indigenous or "dialogue" but enables him to show the complexity and multiplicity of religious interactions. Green argues that his study might help to explain why Weberian approaches of "modernity" going in hand with technological development and the expulsion of irrational customs have not been successful in the Indian Ocean area. On the contrary, the new technologies enabled customary firms to respond with high efficiency to the demands of migrating laborers. In his conclusion (242) Green remarks, that his study is no attempt to describe the outreach of Bombay's religious market in detail and all-embracing for he could have also replaced the examples of Iran and South Africa by Zanzibar or Aden. By consequently adopting the pattern and terminologies of the religious economy-concept to the end, Green perfectly shows how his concept might be utilized for the study on religious networks which can provide the ground for further research in other contexts, too. In doing so, he presumes a lot from his readers in terms of "industrialization" or about Bombay's history. Altogether this book is milestone in analyzing religious networks and their activities in South Asian history!