Ronnie Ellenblum: The Collapse of the Eastern Mediterranean. Climate Change and the Decline of the East, 950-1072, Cambridge: Cambridge University Press 2012 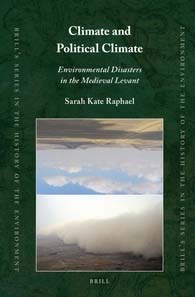 This study from Sarah Kate Raphael is based on a postdoc project, and raises the question of connections between climate and politics, as 'environmental scarcity often was and still is the main cause for violent conflicts' (1). But, to get to the point, the work avoids the pitfalls of being climate deterministic: 'Not all environmental problems lead to conflict, and not all conflicts stem from environmental conflicts. Far from it.' (2) The data used for the study mainly originate from the 12th and 13th century Levant coast. Most of the results are important even for research on the crusades and expand the timeline of Ronnie Ellenblum's study on the same topic and region for the 10th and 11th century (The collapse of the eastern Mediterranean: climate change and the decline of the East, 950-1072. CUP 2012). The direct comparison between these two regional studies can thus give an idea if and how environmental disasters affect politics in practice.

The title under review here is the third volume of "Brill's Series in the History of the Environment" and contains - preceded by a detailed and well readable introduction - four big parts: starting with 'Droughts and Famines' (13-114), secondly a chapter on the exceptionally frequently occurring 'Earthquakes and the politics of mass destruction' (115-166), thirdly a chapter about 'small and destructive enemies', such as locusts, mice and rats (167-186), and finally a short reflection on 'Dearth, crisis and violence' (187-194).

In the region under survey here lies the border between the arid, semiarid and the moist climate, this means for the 'rain-fed agriculture [...] the timing of the rains is thus of the greatest importance' (18) The possibility of a drought, defined by three different types, is high, and droughts can result in famines. The economic change caused by drought is greater than that caused by any other environmental disaster. To deal with drought people developed systems of irrigation, especially around the great rivers like the Nile in Egypt or the Euphrates and Tigris in the Middle East. Luckily the annual data from the Nilometer in Egypt survived to our times and it is true that it 'gave an exact reading of the water level' (26). But this water level depends on two different climate systems in Africa and on the quantity of water taken for irrigation, and the amount can thus depend on human actions. The Nile data thus needs to be synchronised with the history of the Nile valley. The other regions have different problems. Raphael states that the 'decline of Trans-Jordan in the late Mamluk period was a result of natural disasters, specifically earthquakes, droughts and plague.' (31) In general the crusader settlement suffered less from droughts, because only the area of Edessa was situated in an arid region, but after 1187 the shortage of arable land led to the fact that the most important commodity imported into the kingdom was grain. Because of the potential power behind grain surpluses, granaries became one of the most prominent institutions in the region. In time of shortage, Syria could thus import grain from Egypt and vice versa. However, 'in general, the medieval Middle East was ill equipped to battle long-term droughts and famines.' (66) One main problem was hoarding grain, but hoarding was not the main cause of mass famines. Most instructive is the observation, that in time of the great scarcity between 1179 and 1181 the balance of power did not change - instead, Saladin generously 'supplied the Crusader kingdom with all the food it needed' (84) There are also examples of raids and counter-raids to obtain livestock. Most problematic for the region as a whole were the times when drought struck both Egypt and Syria simultaneously, but because the climatic pattern that affect Syria and the Nile come from two very different systems, this happened only in 1178-79, 1263, 1294-95 and 1304.

Part two of the book deals with the earthquakes in the Levant and the political and particularly the architectural reactions. The intensity of an earthquake can only be assessed according to the damage described in sources and their impact on the political, economical and military affairs has seldom been examined. 'There is a tendency among modern scholars to treat medieval historical evidence as biased, exaggerated and unreliable' (118), but this criticism seems often inappropriate - which advantages could be gained by distorting earthquake accounts? Raphael thus provides a brief geological survey of faults and plate tectonics and examines the earthquakes of 1157, 1170, 1202 and 1261 in detail. She mentions an uneven damage pattern, so that the Muslim sites were damaged to a slightly higher degree than the Frankish territories. The earthquakes and the following reconstruction processes appear as a trigger for developments in military architecture. In this process the scale of construction surpassed the needs required for defence, fortresses were built not only against enemies, but against the destructive power of earthquakes. Especially the Crac des Chevaliers was enhanced after every earthquake to make it indestructible to human and natural forces. It withstood the sieges of Nur al-Din 1163, Saladin 1188, al-Malik al Adil 1207, al-Kamil 1229, Türken forces 1252 and was finally captured by the Mamluk in 1271. To make a fortress structurally more competent, the building material was changed from basalt to limestone and the building structure from rectangle to round and polygonal towers.

In the third part, Raphael briefly mentions the curses of locusts and rodents. The chapter contains more information's especially on locust conditions. The main problem is that each environmental disaster presents an almost independent case study and so far no clear pattern of behaviour seems identifiable.

Raphael concludes that food shortage, lack of water and disputes over grazing did not destabilize regimes. Famine conditions aggravated the situations, but no larger campaign or battle between Christians and Moslems took place in years of drought or severe environmental disasters. In such time short term peace treaties were established, sometimes even food supplies from Christians to Muslims and vice versa took place, sometimes taxes were reduced. In the case of the building process of the fortress Vadum Jacob, which was built by mischance exactly on a tectonic fault, it was attacked and destroyed even in a severe environmental situation.

All together, the so called Medieval Warm Period led to more droughts in the Levant and coincidences with some of the strongest seismic activity in this region. The political leaders used all possibilities to deal with the problems: raid and counter raid, as well as truce and short-term peace treaties, but there is no clear pattern identifiable. The study of Raphael gives a good synopsis and expands our knowledge particularly about the influence of droughts and earthquakes in the Levant.