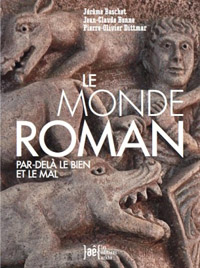 Offering the first synthesis of Romanesque sculpture in Auvergne since Zygmunt Świechoswski's Sculpture romane d'Auvergne (1973) the authors focus on previously marginalized subjects in the carved capitals at five key sites dated ca. 1080 to 1100: Saint-Pierre, Mozat; Saint-Nectaire; Notre-Dame-du-Port, Clermont; and Saint-Marcellin, Chanteuges. In contrast to Świechoswki's focus on style and discrete iconographic themes, they emphasize an "iconographie totale", that encompasses conventional narratives as well as "ornamental" subjects - animal, monstrous and purely vegetal motifs. They explore how these neglected subjects project the ambivalence of Creation and serve to animate sacred space and also seek to understand the distribution and interaction of distinct subjects within the architectural setting.

The first of five chapters focuses on the church building as ritual space and materialization of the spiritual. The authors observe that during the 11th and 12th centuries, the church building itself was imbued with unprecedented significance as obligatory setting of the sacraments. Through its consecration, the church was ritually activated and its material stone transformed into "living stones" complementing the community of the faithful. The architecture of the church expresses the social hierarchy through its internal divisions into three sections of progressively restricted space: the nave (laity), the chancel (monks and canons), and the sanctuary (celibate clergy). The dual nature of the church building is also described as both a locus or fixed place and an iter or journey that traverses a series of thresholds, and leads ultimately to an upward transitus at the high altar from terrestrial church to heavenly Paradise.

In Chapter II it is proposed that foliate/vegetal motifs contribute to the transformation of the church building into a spiritual place, rendering Paradise visible. The authors further argue that, by virtue of the consecration rite, all the 'ornamenta' attached to the building, including its carved capitals are consecrated and reveal the life-giving force of creation. None of these motifs is intended to represent "Nature" in the modern sense but rather the idealized image of Creation derived from the accounts in Genesis, and the carving deliberately calls attention to its artifice, which imbues the vegetal ornament with a sense of order that elevates the representation of plants and trees to a higher plane.

Chapter III explores the profusion of land animals, birds and aquatic figures in the carved capitals. Arguing against using the Bestiary as a means of decoding each individual creature, the authors interpret animality in terms of broader categories based on Genesis and medieval exegetical traditions. Attitudes towards different creatures are determined both on the basis of a hierarchy of beings, and on the basis of the shifted status of animals before and after the Fall. Savage beasts such as lions were understood as threatening to man, and potential vehicles of punishment of his sins. Birds occupied a privileged position as they were understood to mediate between terrestrial and celestial worlds, the material and the spiritual, and also to embody their pre-lapsarian state. Land animals are frequently shown in conjunction with male figures: they allude to the mastery of animals by Adam before the Fall, convey the theme of man's violent struggle to dominate wild beasts (bestia) after the Fall, or allude to man's harmonious relationship with domestic animals (pecus) then. An anxiety about man's own animality is suggested by capitals in which men are seated adjacent squatting apes, held by a rope.

Chapter IV expands the concept of hybridity to encompass the combination of vegetal with animal or human subjects. At the same time the authors argue that medieval concepts of the hybrid (ibrida), which focused on the mixing of like species (e.g. horse and ass), excluded conventional ancient hybrids such as the centaur, griffin and siren, because these creatures were believed to exist. Mozat and Chanteuges display a particular concentration of animal/vegetal hybrids, transforming the tails into foliage in a wide range of both positive and negative creatures, including the centaur. As the vegetal itself is a positive force, the authors interpret its combination with animals or humans as an expression of the generative forces of Creation. The Mozat capitals depicting male nudes with vegetal lower extremities, often described as "tritons", are similarly interpreted here as representing the generative forces of creation, and the nude itself, absent the sexual reference of the genitalia, as an image of pre-lapsarian humanity. A variation on this theme is the series of naked men from the sanctuary capitals at Mozat, often referred to as "atlantes", which literally visualize the idea of living stones that sustain church.

In Chapter V the authors propose an innovative "cartographic method" to trace thematic connections among the capitals. Rather than offering detailed iconographic analyses (see their complementary work at http://imagesrevues.revues.org/1579), they focus on broader thematic strands across space. In Mozat, for example, they trace a thematic emphasis that coincides with the principal entrance to the church from the north flank of the nave: images on either side of the north-south axis depict images of sin and evil powers. An alternative itinerary traces the theme of salvation in biblical images, moving from the north aisle across a diagonal to the right bay of the sanctuary. Finally, in the hemicycle capitals, the authors find a cosmological theme, represented by foliate capitals with naked men arranged in quaternities, and a capital depicting the Angels of Revelation 7 restraining the four winds so that the Gospels may be diffused throughout the universe.

While accepting the book's broader conclusions, one might question or extend aspects of the interpretation. The idea of tracing thematic itineraries among the capitals is compelling, but the authors fail to consider the modes of viewing and access of distinctive audiences - lay or clerical - and they don't document actual pathways that customary ritual processions would have taken, or texts that might have been heard while viewing or passing the sculpted images. [1] Although they dismiss Jean Wirth's interpretation of the nude men at Mozat as hedonistic images of sexuality prior to the implementation of strict reforms, one wonders if certain representations of at least an indirect sexual nature might have evoked the monastic anxieties with monstrosity and sexuality found in cloister capitals and portals [2], or conversely, if the idealized nudes of antiquarian inspiration would have functioned for some viewers as models of sanctity. [3]

The point about sacred space encompassing both a static locus and kinetic movement might be productively framed using recent theories of sacred space that suggest that it is not confined to the physical boundaries of architecture, but is defined by objects in motion, ritual choreography and appeals to the mediation of the senses through the orchestration of artificial lighting, relief surfaces, music and incense. [4] Continuing in this vein one wonders about the impact of polychromy in highlighting the verdant vegetation as well as fleshly bodies.

I would also seek greater complexity in hybridity. In some cases, we are presented with images that suggest metamorphosis or growth rather than a fixed hybrid of two species. The "triton" figures who sprout foliage where their genitals and lower limbs should be certainly suggest metamorphosis, but in others instances of male figures interlaced with foliage, one wonders if this might be distinguished more in terms of the convention of "inhabited" vinescroll - the human figures as not only the creatures and generative forces of Creation but also inhabitants of the Church as vine (e.g. in apse mosaic of San Clemente in Rome, or in the Gloucester Candlestick). Finally, it seems that in focusing so much attention on Genesis as a framework for the interpretation of the animal imagery, the authors neglect the multi-valence of "monstrosity" as it applies to ubiquitous creatures such as centaurs and griffins and their role as objects of wonder. [5]

There is much to learn from this book. The authors allow us to recuperate meaning for the foliate and animal motifs that comprise the majority of Romanesque sculpture, understanding the cohabitation of the human and other living creatures as expressions of the vitality of Creation and its animation of the church building. They also urge us to see beyond strict moralization of nature in terms of good and evil, in order to highlight ambivalence within medieval thought and representation.

[1] E.g. Margot Fassler: The Virgin of Chartres. Making History through Liturgy and the Arts, New Haven 2010.

[2] E.g. Thomas Dale: Monsters, Corporeal Deformities and Phantasms in the Cloister of Saint-Michel-de-Cuxa, in: Art Bulletin 83 (2001), no. 3, 402-436; id.: The Nude, Phantasia, Vision and the Affective Powers of Romanesque Sculpture, in: Romanesque at a Crossroads: Eleventh- and Twelfth-Century Sculpture Studies, ed. by Kirk Ambrose / Robert Maxwell, Turnhout 2010, 61-76.

[5] Kirk Ambrose: The Marvellous and the Monstrous in the Sculpture of Twelfth-Century Europe, Rochester NY 2013.