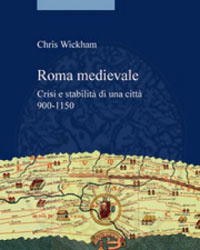 Throughout its history, Rome the "papal city" has always been thought to be different from every other city of Italy. Medieval Rome was no exception: it did not fit in the patterns, the lines of development, the features shared by those Italian cities that, in the late-eleventh century, politically redefined themselves as communes. Rome was special, but what made it such? More importantly, does its distinctiveness really make it incomparable to the other Italian cities?

These two questions frame Chris Wickham's research on the history of Rome during the 250 years between the late Carolingian period and the rise of the Roman commune in the mid-eleventh century. Published in Italian, while its English version is forthcoming, Roma medievale is an ambitious book which, as the author openly states, takes up a double challenge. Wickham is writing a structural urban history: medieval Rome is reframed into its economic, social, religious/cultural structures and through their interactions in a long period of political transformations (24). The second aim of the book is to reposition the history of Rome within its Italian context. It thus balances the lack of systematic, interregional comparison - for which Italian scholars in particular are found guilty - that has made it impossible to understand why and in which respects Rome would have been significantly different from other well-studied cities such as Milan or Florence (25). Up to the late-eleventh century, Rome was certainly the biggest, the richest and the politically most complex city of the medieval Latin West. In a number of economic and social developments, it was also the most precocious. Yet, despite the undeniable differences, Rome shared with other Italian cities a number of so far underestimated similarities.

Chris Wickham articulates his structural history of Rome in seven lengthy chapters. The first one serves as a programmatic introduction (23-59). The author defends here the preference given to the abundant documentary sources available in the ecclesiastical Roman archives and clarifies his personal position in the wider historiographical debate. The second chapter focuses on the exceptionally wide territory under the city's control, in which no rival town was to be found in a range of more than 80 km (61-143). Wickham neatly divides the medieval Roman countryside in three belts: castles were built in the periphery, the Agro Romano provided the grain supplies for the city, while gardens and more particularly vineyards lay just outside the urban walls. Stress is put on the Agro Romano and its lands of ecclesiastical property rented out to lay aristocrats and less prominent urban tenants. The wealth of Rome precisely reposed on the city's firm grip on this wide agricultural belt. The third chapter is then dedicated to the urban economy highlighting another distinctive Roman feature: the regiones with their strong micro-identities and their highly specialised productions (145-220). The rhythm of economic development, the lack of Roman coinage and the wealth of artisans and merchants are addressed in this section. With the fourth chapter the analysis moves on to the social and political structures of the city, featuring at the upper level its aristocracy (221-306). The watershed in the history of medieval Rome is identified with the year 1046: before that date, during the period defined by Wickham as ancien régime (226), the local ecclesiastical and lay offices were firmly controlled by the "old aristocracy" whose most important families are presented in a series of short case studies, among which the Crescentii and the Tuscolani hold the place of honour. After 1046, this aristocracy progressively deserted the urban political stage, by then occupied by foreigners, to build signorie in the countryside. A "new aristocracy" rose in the city: the Frangipane, the Pierleoni and the Corsi stand out among the many families belonging to this social echelon. As a whole, the lay aristocracy of Rome was certainly the richest in Italy, but its wealth was in the hands of an exceptionally large number of families, which in turn means that none was exceedingly rich. What made the Roman "new aristocracy" particularly famous and politically active, both at the national and international level, was its proximity to the popes and its ability to capitalise papal patronage. The following chapter focuses on the "medium élites" (a social group more commonly referred to by historians as militia or milites), their wealth and their roots in the regional societies (307-374). Five case studies are dedicated to the best-documented families and three regiones (Trastevere, Pigna, S. Maria Nova/Colosseo) are presented and studied in detail. The last section of the chapter deals with the different urban social networks (scolae and parish churches) to conclude that lay solidarity in Rome was mainly built on regional identities. The sixth chapter presents Roman identity as performative (375-440): liturgy and rituals, and particularly processions held on a regular basis, provided a powerful frame of reference for the different social groupings in the city. Rome with its past and its landscape, cluttered with ancient monuments and basilicas, offered a rich and varied range of options for different political and cultural agendas. Renovatio was always an on-going process in Rome, promoted through various means such as building campaigns, iconographic programmes, choices of legal traditions and narrative strategies. The seventh and final chapter focuses on the hundred years between 1050 and 1150 and is tellingly entitled "La crisi" (441-520). This crisis erupted at Sutri in 1046 and resulted in a long series of German popes who changed the rules of the political game. Despite its peculiarities, the Roman crisis runs parallel to the turbulent events that accompanied the rise of the communes in the north and thus forms part of the more general "Italian crisis" of the late eleventh century. In this period a more sophisticated and professionalised system of justice was developed and finally crystallised around 1150 in two new but opposing institutions, the curia and the Roman senate. The political history of Rome is thus retraced from the time of Hildebrand/Gregory VII to pope Innocent II whom Wickham describes as one of the most determined, cynical and sneaky popes of the whole period. The last section of the chapter, and the book, is dedicated to the rise of the Roman commune, its rooting in the regiones and its opposition both to the papacy and the new aristocracy. In the final pages (515-520), Wickham goes back to the problem of the alleged difference of medieval Rome arguing that, despite its distinctiveness, it can and should be read and understood against the background of the political and social history of northern and central Italy.

We have come to expect very rich and ambitious books from Chris Wickham. Roma medievale does not disappoint. The British historian draws an elaborate, but perfectly defined model for a complex city that, as he admits himself, the sources do not evenly illuminate. Wickham takes up the challenge to build on the abundant, and yet fragmented Roman written documentation: his model provides both a heuristic tool and a frame of reference, the accuracy of which shall be tested and adjusted with the integration of new data emerging especially from ongoing and future archeological surveys. The waterfall of names and toponyms, as well as the numerous short biographies sketched on the basis of the Roman charters will be a true challenge for any reader who is not acquainted with the history of Rome and its geography. A nice set of maps and a few genealogical tables offer some aid, but the high density of information and the entanglement of the networks and interactions between the different actors on the Roman stage can at times be disorienting. To those who are more particularly interested in specific aspects of the history of medieval cities, the book offers seven self-contained chapters.

Medieval Rome was indeed the city of the popes, but it was also the city of ambitious lay aristocrats (women and men), merchants, artisans and peasants. Its heart not only beat in the Lateran or in St Peter's, but also in the many churches and monasteries swarming within and outside its walls. Despite its extreme complexity, Rome was a coherent and cohesive city. It had a lot to give to the individuals and social groupings operating inside it, offering many more possibilities and opportunities than any other city of Italy. There, in the end, lies its difference.