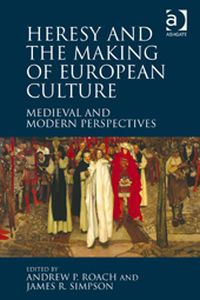 The ambitious project underpinning the collective work Heresy and the making of European Culture was to broaden the horizon of discussion on heresy and orthodoxy to include plurals: heresies, orthodoxies, christianities, persecutions. Following a recent revival of the study on heresy in Medieval History, which has been sparked by the wider reflection on the idea of power, the editors have achieved the goal of gathering a total of twenty-three contributions to a 480 pages volume, which has been further divided into six sections. In the effort of being as widely inclusive as possible, each section in fact embodies one of the various currents now traceable in modern historiographical approaches: the broad-ranging reflections (Ware, Fierro, Murray, Dunn); the debate on the invention of heresies - which, tellingly, here is not in inverted commas - (Bellarbre, Angelovska-Panova and Roach); the literary approach (Anderson, Léglu, Hartmann, Simpson); the focus on law, with the inquisition as its religious spin-off (C. Taylor, Petkoff, Gerrard, Beccarisi, Doležalová, Thomas); the intertwining of heresy and communities (Given, Dorfmann-Lazarev, F. Taylor); and the longue durée overview, stretching to modern heresies (Tonner, Bates Mochrie).

The result is a rich, dense and qualitatively high assortment of studies by both established and young scholars, where pluralism is the key word. One of the intents, that of moving away from the monopoly of Catharism, has driven editors Roach and Simpson to include studies on the past and the present, West and East, legal and literary context, and produced possibly the most comprehensive collection of studies on religious dissent and culture, but also on religious dissent in culture, where 'culture' is meant in the broader possible sense. With this as the main goal, the end-result becomes inevitably not as consistent as the initial plan perhaps wished for. Although the editors are aware of the possible lack of need to 'pluralize culture', nonetheless the inclusion of so various angles, sources, contexts and approaches does bring within the threat of centrifugal forces, occasionally steering away from the common guidelines to become solitary monads: studies on related issues but not necessarily well-moulded into the common framework.

Multiplicity per se, however, should not necessarily be seen as a drawback, for a wider emphasis on 'plurals' represents a healthy, refreshing perspective in a field which has recently experienced indeed a revival, but one that suffered for having been carried out by schools of thought somehow 'running on parallel tracks'. Often current debates are developed within very specialist environments, in very narrow fields, and through the reading of sources which can be circumscribed to restricted geographical, chronological, or thematic boundaries. Instead, by putting side-to-side contributions on so many different subjects, a reader is compelled to draw more general conclusions, compare various case-studies, and question the links between power, control, non-conformism and the making of a common European culture.

In particular, this reviewer was impressed by some studies. Alexander Murray's contribution on 'The burning of heretical books', while sparked by the reading of Thomas Werner's book Den Irrtum liquidieren: Bücherverbrennungen im Mittelalter (Göttingen, 2007), becomes a broader reflection on the ways in which 'authorities can keep public expression of thought within bounds' (78). Murray's reading of the many case-studies brings the author to focus on the quality, not quantity of medieval book burning, and to reflect on Werner's idea that, in the Middle Ages, this censoring of 'forbidden books' was a solely-ecclesiastical procedure. In so doing, he points out two aspects: that of the purpose of burning and that of the flaws in the judicial aspect of the procedure, both less-obvious consequences of this religious-led punishment. Murray is very convincing in showing how, as a practice, destruction of books was more about demonstrating publicly the justness of destruction, than about deleting danger per se. Then, he proceeds to show, through the reading of contemporary sources, two main flaws of this judicial practice: the conscience of practitioners, and the muddling of jurisdictions. All in all, Murray's contribution is an expert, lucid, wide-spanning reflection on the dangers and implications of a medieval practice which is often either taken for granted (and thus judged morally, without appropriate contextualisation); or brushed upon cursorily, while focusing on repression of non-conformism.

James Given's 'Learning by doing: coping with Inquisitors in Medieval Languedoc' (chapter 17) follows Given's long-standing interest in primary sources as a vehicle to understand medieval communities and their attitude to power. He focuses on the 'complex, ever-changing, messy stuff of reality' (335), vis-à-vis its textual reflection, the records. By taking the well-known Languedocian records of XIII and XIV century into consideration, Given goes through some cases where the records allow us to see how 'reactions to the inquisitors changed over time'. He does so in an orderly, meticulous manner, and through a good number of sources. The progressively more elaborate and skilled way in which suspects did organise and set up reactions to the repression of religious non-conformity is read through depositions and inquisitorial manuals. The thirteenth and early-fourteenth century are seen as a crucial time during which suspects 'learned' to react through discrete and better-targeted actions, which they preferred to large-scale violence. Interestingly, Given does not discard the idea of 'underground networks', for instance in the case of the Beguine groups, and uses it to argue the idea of a learning process. People learn to cope with authorities, be them lay or ecclesiastical, they learn to cope with repression, and with repressors. Given's admission that sources are silent about the number of successful attempts of rebellion, although appropriate, does not detract from the overall achievement of his analysis: that of pointing out an adaptation pattern which, in the opinion of this reviewer is successfully applicable to both medieval communities and modern ones.

Lastly, the very stimulating contribution by Philip Tonner, 'Between Medieval and Modern Beholding: Heidegger, Deleuze and the Duns Scotus affair'. This well-structured essay brings into the collection the refreshing contribution of philosophy in the interpretation of Scotus' supposed heresy. Tonner uses philosophy in the longue durée to understand the impact of Scotus on both the contemporaries and later philosophers, and to assess the relevance and motivations of Scotus' exiles from Paris to Cologne in the first decade of the XIV century. By bringing together political, theological and philosophical reasons, Tonner manages to disentangle the motives and urgency behind the removal of Scotus from Paris. Although he concludes that the 'real' motives for this mystery might never be found , he then proceeds to assess how Scotus' borderline theological stances became a tool which proves fundamental in Heidegger's 'attempts to make sense of being', and in Deleuze's discovery of a 'fil rouge' in philosophy which links together philosophers such as Bergson and Scotus. Paradoxically, the heretical nature of his idea of 'Haecceitas' is not discussed here per se, but in relation with - on the one side - the politics of orthodoxy, and - on the other - the relevance it had to much later philosophical theories about the nature of being.

The collection is left open-ended. No conclusion has been drawn by the editors, in the effort to account for a variety of points of view, not necessarily in agreement, or consistent between them. In so doing, the book proves extremely successful, and achieves its target: it shows how mechanisms of inclusion and exclusion set up and pursued by all parties were fare more nuanced than some historiography tends to suggest. This is particularly evident in Section III. It is for this reason that the perspective touched upon in the Introduction (8, quoting Aranje Freidenberg) should be re-thought carefully: not only those historians 'motivated by religious commitment', but indeed all historians investigating this and other aspects of Medieval religious history should not separate the 'religious' from its nuanced background. Religious history - it is proven here - is in fact first of all the history of religious mentality, with its complexity, individual interpretations, and inconsistencies. Nevertheless, some sort of conclusion could have been beneficial, if only to assess whether the rather sophisticated paths set up in planning this collection had been followed. Here, we have a spectrum of identities, of cultures and cultural processes, but a rather fragmented one, which would benefit from a final 'pulling together' of some of the main strings of such intellectual operation.

This book has helped enormously the understanding of how manifold belief was and is: this should be the basis of our research, and religious historians should not detach religious concerns, issues of salvation and damnation from any political dynamic or issue of power, as they are all necessary sides of a multi-faceted reality, then and now.