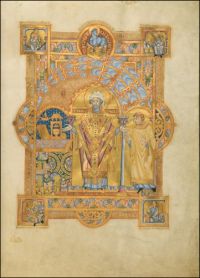 The only word that stands out in this otherwise precisely descriptive book title is "Vollendung" (perfection), and it is a logical place to begin this review. In its production values this work on the Uta Codex represents the capstone of publication on the manuscript, with every decorated page splendidly reproduced. Measuring a generous 39 × 27 cm to reproduce accurately the size of the eleventh-century manuscript, the book comes in a boxed slipcover that also mimics (and depicts) the magnificent and original book box in which the manuscript was originally contained (today the box and manuscript are stored separately in the Bayerische Staatsbibliothek [BSB] in Munich). The slipcover also holds a separate supplemental bifolium of the first two illustrated pages of the Uta Codex, reproduced in full facsimile quality, which gives the reader a real sense of how truly spectacular the original painted pages are. Even if the book proper does not have the same shimmering gold as the facsimile sample, Quaternio Verlag is to be heartily congratulated on a publication gem that does justice to the original.

The question of production quality is not simply a matter of praising the publisher and the BSB for their commitment to the project; it also raises more theoretical issues concerning the reproduction of medieval manuscripts. In her introduction to the book Claudia Fabian, head of the BSB's Manuscripts and Rare Books Department, places this publication within the broader scope not only of scholarship on the manuscript (which dates back to Franz Kugler in 1834) but also of the long-standing activities of the library with regard to manuscript reproduction. The BSB has been at the forefront of using cutting-edge technology to make its vast manuscript holdings digitally available to the public. To some, this would make the production of books like the one under review an obsolete notion. By pursuing such a project the BSB has fulfilled what Fabian calls the library's long-held desire to give the Uta Codex an adequate presentation, and it more broadly reaffirms the importance of the physicality of books, medieval and otherwise, in an increasingly digital world that is in danger of losing the idea of das Ding an sich. It might be pointed out, however, that even though the book's concepteurs link this new publication with similar projects completed for the Codex Aureus of Saint Emmeram (a Carolingian Gospel book made for Charles the Bald) and the Sacramentary of Henry II (another Regensburg product of the first quarter of the eleventh century), those were full facsimiles that reflect both the richer production values of the original books and the modern predilection for paying more attention to royal than to monastic works.

In her chapter on Bavaria and the Ottonian empire around the year 1000, the late, lamented Brigitte Gullath does a fine job sketching the historical background for the Uta Codex and its creation in the Regensburg monastery of St. Emmeram, and she reviews the thorny question of Abbess Uta's identity and the date of the manuscript. Gullath broadens our knowledge about the Augsburg origins of Uta, affirms my own conclusion (2000) that the Uta of the Codex and the Uta in the Bamberg Rule Book (Bamberg, Stadtbibliothek Msc. Lit. 142, ca. 990) are the same individual, and follows both me and Katrinette Bodarwé (2008) in firmly situating these books in the context of Uta's reform of Niedermünster from an institution of canonesses to one of Benedictine nuns.

Revisiting the dating question is one of Karl-Georg Pfändtner's original contributions to the volume. In the earliest scholarship the Uta Codex was seen - primarily on the basis of style - as a product of the later eleventh century, a position more recently revived by Hagen Keller (1996) on historical grounds. Pfändtner wishes to harmonize this position with the results of Gullath's chapter, so he proposes that it was possible for Uta to have ruled Niedermünster from ca. 990 to the creation of the Uta Codex sometime in the 1040s or even as late as 1052 (when Emperor Henry III was in Regensburg for the canonization of Wolfgang and Erhard); this would better account for, among other things, the emphasis on Erhard and the traces of Pseudo-Dionysian iconography in the Uta Codex and the documented interest in his relics at St. Emmeram in 1049. Although this is an intriguing possibility, there are several problematic presumptions here, for example that the 1049 texts about the Pseudo-Dionysius should have chronological priority over the visual iconography in the Uta Codex. And while the proposition of a fifty- or sixty-year tenure for Uta cannot be proved one way or the other (I find it difficult to imagine), Ulrich Kuder (1998) and others have effectively countered many of the basic premises of the Keller argument that is at the heart of Pfändtner's proposal.

In any event, in chapters devoted to each decorated page Pfändtner does an excellent job of describing the images and guiding the reader / viewer through the complex visual and textual iconography of the Uta Codex. Along the way he adds several good observations to the existing scholarship (e.g., that just as Mary in the Dedication page holds the incarnate Word in her lap, so Uta holds the book in her hands to forge a connection between the two women). More important, in a chapter on the style and arrangement of the pictures in the book he takes advantage of the technological and photographic process for the publication that allowed for a new microscopic examination of the images; this revealed new details about their sketching and preparation. Other chapters communicate what is known about the provenance, codicology, book case, list of Gospel readings (pericopes), and use of the Uta Codex. I was thrilled, for example, to learn about the trace of wax, presumably from its use in the liturgy, on folio 35r.

The final major section of the publication is a very helpful schematic rendering of each page devoid of its imagery but with the Latin inscriptions on the left and facing translations on the right; a little color picture in the corner is a good mnemonic for the reader. This basic idea is derived from Jutta Rütz's 1991 publication and improves upon that by including the tituli themselves rather than numbers keyed to transcriptions elsewhere in the book. For some reason, Pfändtner decided to replicate Rütz's transcriptions exactly, but I already corrected several of these in 1995 and 2000; it is a mystery to me why the author would reproduce manifestly incorrect tituli (see, for example, my rendering of the Temperance titulus on the Hand of God page [Cohen, 2000, 35-36 and n. 46], which corrects Rütz against the manuscript and the source text in Macrobius).

Nevertheless, the publication as a whole is a powerful recapitulation of what was, in many ways, the perfection of early Regensburg book illumination. Pfändtner and his co-authors, the BSB, and Quaternio Verlag all deserve credit for bringing this publication to fruition. The Uta Codex is one of the most beautiful and fascinating manuscripts of the early Middle Ages, and it deserves to be known by more people. Even if certain iconographic and interpretive questions remain open, as Pfändtner remarks in his conclusion, this publication reaffirms how much we do know about a truly outstanding manuscript. It is to be hoped that the appearance of this volume will bring the Uta Codex to a wider audience that will appreciate its beauty and continue to explore its complexities.