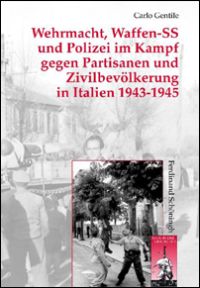 This is an extraordinary book. It rests on materials from forty-one archives in six countries and on total command of entire libraries of German and Italian printed works. And it offers an unprecedentedly detailed, subtle, and differentiated analysis of the German and Fascist anti-partisan war in Italy, and of the circumstances, motivations, perpetrators, and consequences of the massacres in which up to 10,000 non-combatants perished.

Gentile's primary sources encompass the surviving Wehrmacht, Waffen-SS, and SS-Police Italian-theater documents; the central and local records of the Salò Republic; wartime U.S. Army, British Army, and Italian police interrogation records and war-crimes reports; and Allied, German, and Italian post-war trial documentation from the late 1940s to the present. His first three chapters outline the structure and development of the German anti-partisan war; two final chapters then analyze the deeds and perpetrators of the units most responsible for the carnage.

Gentile begins with the merciless German reaction to Italy's September 1943 armistice with the Western powers. A richly sourced and detailed account of the anti-partisan war follows. The first of five phases included autumn-winter 1943 clashes in southern Italy between German front-line units and ad hoc insurgents, most spectacularly in Naples. Numerous massacres by German units during the disorderly retreat northward to the Cassino position resulted. From late winter through spring 1944 increasingly well-organized partisan units, armed from Italian army surplus, captured German weapons, and Allied airdrops, harassed Germans and Fascists throughout central and northern Italy. High summer through early autumn 1944 marked the culmination of the partisan war, of German anti-partisan operations, and of German massacres of Italian civilians. Then rain, snow, hunger, discouragement, a Mussolini amnesty, much-improved planning and execution of anti-partisan sweeps, and the movement of the front northward into the Apennines caused Resistance activity to collapse. Enough partisans nevertheless survived to launch a general uprising across north Italy as Anglo-American forces surged toward the Alps in April 1945.

Gentile then turns his attention to the units and individuals most implicated in massacres of civilians. German forces in Italy routinely executed captured partisans and "partisan suspects" - a category defined broadly indeed - without second thoughts, in accordance with the Wehrmacht's peculiar interpretation of the laws of land warfare. Widespread reprisal-murder of male hostages and scorched-earth retreats (73-75, 92), following German precedents in 1870-71 and 1914-1918, were likewise unproblematic. But mass murder of western European non-combatants was a different matter. Gentile therefore devotes an entire chapter to the deeds and perpetrators of the 16th SS-Panzergrenadier-Division "Reichsführer-SS", which in August-October 1944 alone killed well over 2,000 civilians, primarily women and children: a fifth of the German occupation total. And the final chapter analyses the deeds of Wehrmacht and police: the Fallschirm-Panzerdivision "Hermann Göring", the 26th Panzerdivision, a wide variety of lesser units, and the SS-Police partisan-hunting units and occupation apparatus.

German atrocities in Italy have generated a notable literature in both languages. Yet Gentile offers something entirely new and different: a comparative analytical framework, centered on the campaign's course and on German units and their officers and men, that sets events firmly in both military and civilian contexts, and provides satisfying causal explanations for the many atrocities for which sufficient evidence has survived.

The results fit only partially with current explanations for the radicalism of the German Reich's conduct of its last war. National socialist belief; the fanaticism characteristic of elite units composed partly or mostly of volunteers; experience in Germany's eastern war of annihilation; and superior orders and guidelines that mandated savagery all played roles - but no one factor explains the entire range of outcomes that Gentile describes.

Ideological conviction and elite-unit zeal best fit the deeds of the 16th SS-Panzergrenadier-Division. Its cadre exemplified the career open to talent in war and murder that Hitler promised and delivered. Commanders down to company level had progressed from Nazi youth to Waffen-SS maturity in the concentration-camp guard corps and 3rd SS-Panzerdivision "Totenkopf", under the tutelage of the egregious Theodor Eicke. The troops were fresh from the Hitler Youth; over four-fifths of Walter Reder's armored reconnaissance battalion, which killed more civilians than any other 16th SS element, were aged between seventeen and twenty (265). As with the murder of 642 civilians at Oradour-sur-Glane in July 1944 by a similarly led Waffen-SS unit, 16th SS Panzergrenadier-Division killing was in many cases deliberate, large-scale, and choreographed in the style of the Einsatzgruppen in which at least some 16th SS officers had served. Jews were scarce, but ideology and experience marked for death priests, monks, and "bandit suspects" of all ages and both sexes deemed unsuitable as slave labor. Even the terminology fit: the responsible army command described Reder's late-September 1944 terror-sweep in the Monte Sole-Marzabotto area, south of Bologna, as an "annihilation operation [Vernichtungsunternehmen]". Its aim was to physically exterminate all resistance; the result the murder of roughly 770 non-combatants (239, 250). The preferred tool was inevitably the MG42 machine-gun; its cyclic rate of up to 1500 rounds per minute delivered over twice the firepower of comparable Allied weapons. Turned point-blank on civilian captives, it literally tore bodies to shreds (255-256).

Yet as Gentile makes clear, neither ideology nor genocidal expertise necessarily produced - or were necessary to produce - Vernichtung. The SS-Police apparatus in northern Italy was shot through with Einsatzgruppe veterans and counter-insurgency specialists with long experience in Russia and the Balkans. Yet many of these same figures had belatedly concluded that indiscriminate terror was ineffectual; astute judgment of the war's likely outcome may also have modified behavior (400-404).

Conversely, the runner-up to 16th SS in number of civilians murdered, the Fallschirm-Panzerdivision "Hermann Göring", was a motley band indeed: not paratroops (despite the name), undertrained, combat-inexperienced, and commanded by officers who had only rarely served in Russia or the Balkans. The division - especially its highly mobile and heavily armed reconnaissance battalion - nevertheless killed up to 1,000 non-combatants. A few of the markers that distinguished 16th SS did play evident causal roles. The troops were exceedingly young, Hitler Youth graduates, and largely volunteers. Ideological conviction was widespread within the officer corps (328-334). Yet even units such as 26th Panzerdivision, led largely by officers selected for conservative Prussian leanings, could murder copiously. In late August 1944 its reconnaissance battalion, ordered to take no prisoners, shot 175 men, women, and children - and no confirmed partisans - in the course of a sweep in north-western Tuscany triggered by exaggerated threat reports (379-388). Some companies in the battalion nevertheless chose not to kill, and reports of the carnage led the division staff to close the operation down.

As Gentile also suggests, the theater-level framework of orders and standard operating procedures also helped determine unit and individual behavior in the face of real or imagined civilian resistance. A Hitler directive of December 1942 forbade proceedings against German soldiers for crimes against civilians, and demanded the use of "any means, without limitation even against women and children, so long as it leads to success" [2]. Draconian Wehrmacht high command "Bandenbekämpfung" guidelines and radical mid-1944 exhortations by the theater commander, Field Marshal Albert Kesselring, likewise helped determine savagely disproportionate Wehrmacht and Waffen-SS reactions to everything from unfriendly hand gestures to snipers and ambushes.

Significantly, Kesselring reinforced his demands for "immediate most drastic steps [...] as punishment and deterrent" by citing, from the Wehrmacht's holy book, a sentiment traceable to the elder Moltke: "blunders in the choice of methods" (144) were infinitely preferable to inaction. [3] The Prusso-German mission-tactics system indeed gave soldiers from commanders to individual machine-gunners and riflemen unprecedented - compulsory - tactical freedom. When coupled in both world wars with Prussia-Germany's sanctimonious abhorrence of irregular combatants and uniquely radical attitude toward the inhabitants of conquered territories, Auftragstaktik guaranteed more than the occasional episode of all-azimuths lethality. [4] Gentile does mention in passing German practices and atrocities in 1870-71 and 1914-18 (35). But he may have given insufficient weight to the long-standing murderous dynamic inherent in the military-organizational culture from which National Socialism itself derived, and which it amplified and perfected.

Wehrmacht und Waffen-SS im Partisanenkrieg is nevertheless an enormous achievement. It provides a detailed and brilliantly researched account of the most lethal German anti-partisan campaign in western Europe. It offers persuasive explanations of deeds and perpetrators. It is a fundamental contribution to our understanding of the armed forces, anti-partisan operations, and occupation policies of the Third Reich. And it clarifies in definitive ways a central traumatic event in united Italy's tormented history.