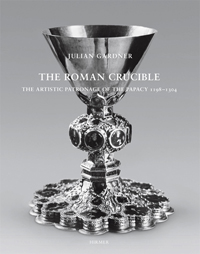 The Roman Crucible represents the culmination of British art historian Julian Gardner's five-decade long career researching the role of papal patronage in the development of late medieval Italian art. In the course of seventeen chapters Gardner surveys a vast range of art and architecture sponsored by thirteenth-century popes, cardinals, and other members of the papal court. According to the book's larger historical argument, curial sponsorship gave rise to a broad cultural development in which Rome and the neighboring towns of Anagni, Orvieto, and Viterbo emerged as the most vibrant and stylistically diverse artistic centers in late medieval Europe. Gardner develops this thesis through rigorous analyses of written sources and a daunting number of objects in a variety of artistic media (churches, chapels, tombs, tabernacles, wall paintings, mosaics, book illuminations, wax seals, metalwork, and embroidery). The book's historical scrupulousness, commendable breadth of scope, and user-friendly presentation ensures that it will be a standard point of reference for scholars of thirteenth-century Roman art.

Many might indeed utilize the book as a reference work. Rather than narrate a fluid story extrapolated from historical evidence, in the vein of Robert Brentano's Rome Before Avignon [1], Gardner methodically presents the facts about artistic commissions. The book's extraordinary level of detail demands an attentive reader, and those not familiar with at least some of the approximately eight hundred historical individuals mentioned in the text might become lost at times. Gardner balances such depths of historical data with passages that offer brilliant insight and analysis, notably in the book's introduction and conclusion, and in the opening and closing of each chapter.

Gardner has always been an interdisciplinary scholar, a historian by training who was drawn to the study of art by way of an interest in people, especially thirteenth-century ecclesiastics. With his 1969 doctoral thesis [2], subsequently published as a series of substantial articles, Gardner effectively pioneered the field at the intersection of art history and papal history. At the time, many historians of late medieval art were burrowing ever deeper into debates about attributions and stylistic chronologies. Gardner's shift in focus towards questions of patronage and historical context productively broadened the discourse and offered a new and perhaps more fact-based way of thinking about art. The present volume follows the same path and, like many of Gardner's innumerable articles on the topic, it straddles the line between papal studies and art history. One might just as easily compare the book to the work of curial historian Agostino Paravicini Bagliani [3] as to more conventional art historical treatments of Roman Duecento art by Serena Romano [4] and others.

In the first chapter (9-16) Gardner makes a case for studying the art and architecture of thirteenth-century Rome from the perspective of papal patronage. Firstly, he argues, churches and their decorative programs are better preserved than secular monuments. Secondly, in addition to being prolific sponsors of artistic commissions, Rome's ecclesiastical elite were also the primary producers of texts. For this reason, we know much more about the popes, cardinals, and clerics of the Curia than we do about the painters, sculptors, and architects that carried out their commissions. Gardner's implication is that the study of patronage is more fruitful than other approaches because it allows the scholar to stay close to the written sources. While Gardner demonstrates the value of this approach, he does not problematize the crucial question of agency: how to measure the creative role of patrons versus the artistic freedom of sculptors, painters, and architects. A more nuanced assessment of the complexities of medieval art production, focusing on the interactions between patrons, artists, and audiences, would have been welcome.

The book's chapters are organized variously according to medium, chronology, or geographical location. Although Gardner has traditionally been most interested in painting and sculpture, his two chapters on architecture (35-84) are among the best in the book. Chapter 3 (35-54) outlines the deliberately conservative tradition of church building in the period, which never wavered too far from the architectural principles established by Rome's fourth-century basilicas. Against this backdrop, Chapter 4 (55-84) highlights the subtle ways in which gothicizing elements, such as the pointed arch, were introduced into the building vocabulary of Rome and Central Italy. In the subsequent chapter (85-108) Gardner connects the arrival of gothic stylistic features more generally to the increasing number of French cardinals in the Roman Curia of the second half of the century.

Three of the volume's most substantial chapters cover the familiar territory of late Duecento art. These chapters (109-156, 245-302) draw on Gardner's important early publications of the 1970's, which elucidated the relationships between papal patrons - especially Nicholas III, Nicholas IV and Cardinal Jacopo Stefaneschi - and the period's most celebrated artists. In the context of the book as a whole, the author's examination of the last quarter of the century appears comparatively uninspired. In discussing the art of renowned individual artists such as Giotto, Cavallini, and Torriti, Gardner attends increasingly to matters of palette and stylistic influences, leaving many functional and contextual questions unaddressed. Whereas in his recent book, Giotto and his Publics [5], Gardner productively resolved the inherent tension between artist-centered narratives and patronage studies, the present volume is less successful in this regard.

Gardner's methodological focus on patronage comes into its own in the examinations of tombs, portraits, donor imagery, wills, and objects that can be closely linked to specific individuals. The three chapters dealing with smaller-scale artifacts such as wax seals, embroideries, metalwork, and manuscripts make hugely significant contributions to the study of medieval art (157-218). Gardner's attention to such "minor" and previously overlooked historical objects brings his study into alignment with current developments in the discipline. The chapter examining the peripheral summer residences of the papal court represents another important broadening of the field (303-328).

A short chapter on English embroideries (opus anglicanum) highlights the interest of popes and cardinals in imported textiles (209-218). Here, Gardner demonstrates how richly decorated embroideries became increasingly desirable artifacts, especially during the last decade of the century. While designed for liturgical purposes, such textiles appear to have served members of the Curia equally as markers of cosmopolitanism and cultured taste. Chapter 7, "Submerged Evidence: Texts and Wreckage," examines papal inventories, wills, and objects such as the mesmerizing chalice made by Guccio di Mannaia for Nicholas IV. The subsequent analysis of cardinals' seals, a topic that Gardner pioneered in a 1975 article [6], is both rich and lucid. The author examines fifty-eight wax impressions, highlighting the diversity of stylistic preferences among individual members of the papal court. Here, Gardner elaborates on the brilliant argument advanced in his earlier article, that cardinals' seals can serve as surrogate witnesses to formal and stylistic developments in the period's metalwork, most of which is now lost. The sheer number of surviving impressions, Gardner points out, allows one to chart subtle shifts in style and ornament with remarkable precision.

The Roman Crucible is a remarkable achievement, exhaustively researched and wide-ranging in scope. The book is handsomely designed, well illustrated, and includes invaluable and substantial reference-sections that index names, places, and objects, and catalogue cardinals' seals and list the members of the thirteenth-century Curia. Gardner's book fills an important gap in late medieval patronage studies, and with its historical rigor and measured argumentation it is likely to remain the standard work on the topic for decades to come.

[2] Julian Gardner: The Influence of Popes' and Cardinals' Patronage on the Introduction of the Gothic Style into Rome and the Surrounding Area, 1254-1305, Ph.D. Thesis, University of London, 1969.