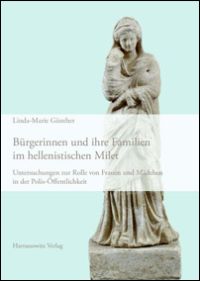 This book is the result of a deep knowledge of the epigraphic corpora of Miletos and Didyma and a long-standing engagement with the history of this major Ionian city. It is a work of detailed scholarship which will be indispensible for those engaging with the history of Miletos and its (female) citizenry, or with Hellenistic women more generally. In her introduction, Linda-Marie Günther explains that in writing the book she perceived a need to move away from more general studies of civic elites and the role of women within them, and to investigate in greater detail the structures of a single Hellenistic city, its demographic make-up, and its social 'identity'.

The book is not an easy read. The reader should be warned that it does not offer a continuous argument or even a series of arguments. In the final paragraph of her concluding remarks, the author implies as much: "Die vorgelegte Arbeit versteht sich [...] durchaus als eine Art Materialsammlung, die zu weiteren sozial- und kulturgeschichtlichen Fragestellungen, bzw. Diskussionen zur hellenistischen Zeit respektive insbesondere zum hellenistischen Kleinasien anregen soll" (307). Only in the introduction and in the resumée does she permit herself and her readers to take some distance from the relentless discussions of prosopographical details that dominate the body of the work.

For this is first and foremost an exercise in reconstituting multi-branched family networks for the Milesian citizen women of the book's title. I counted some 150 full and partial stemmata, many of which are hypothetical or have a significant hypothetical element (as Günther herself is the first to point out: they are constituted, she writes, "mit dem Mut der Hypothese" - 304). The enterprise she has undertaken is (obviously) possible only by discussing both female and male individuals, but as a result the book falls uneasily between two stools: it is not a full-blown prosopographical study of the Milesian elite, but neither is it a study of the 'roles of women and girls in the public sphere' as the book's sub-title announces. Although it takes, in each of its chapters, women as a starting point (see below for the book's structure), and its main aim is the 'Einordnung' or 'Zuordnung' of each of the 178 women under consideration into families reaching back for as many generations as the evidence will allow, we often end up with family reconstructions that appear almost to have lost sight of the woman in question. As an example I take a complex and hypothetical family stemma over six generations (82) which comes in the chapter 'Stiftungen in Heiligtümer'. A gift of an incense burner to Artemis Pythie by a certain Battis Pantainou is recorded in one of the Didymaean inventories. The gift cannot be dated other than by a terminus ante quem of 277/276 (it is listed as one of the objects that survived the ransacking of the sanctuary by the Galatians in that year). The plausibility of the stemma's reconstruction is entirely dependent on the occurrence of the (woman's father's) name Pantainos in a number of other, incompletely graspable, family connections. Of the four or five men named Pantainos attested in the 4th and 3rd centuries, three end up, tentatively, in our stemma. Battis herself, however, receives no certain placing because we cannot attach a secure date to her. Was she the daughter of the stephanephoros of 294/293? Or of the coin magistrate of c. 360-340? Or of a Pantainos not otherwise attested but possibly even earlier? What, in the end, do we learn about Battis?

Let this one example not serve to undermine the work done: I cite it rather as an indication of the huge difficulties encountered in this kind of painstaking prosopographical work. Indeed, Günther is fully aware of the fragile nature of the stemmata that fill her pages, and the pitfalls that beset the prosopographer: what length to assume for a generation; what age-difference at marriage between man and woman; how much weight to put on the recurrence of names down the generations and across maternal and paternal lines. Names can be the prosopographer's salvation, but they can also lead along very false routes, especially when combined with uncertain chronology. At least Miletos, unlike most other Greek cities, has the benefit of a long and accurately dated list of eponymous stephanephoroi, providing chronological anchoring points. Some of the other high offices (prophet at Didyma; theoros) can be roughly positioned within a male career relative to the stephanephorate. For women, the only age-related certainty we often have, is the (annual) hydrophoria of Artemis Pythie, a priesthood held in early life, always before marriage.

The book is rigorously structured. Over six chapters, the material (i.e. the women) has been arranged into as many categories. We first meet women in a financial context (ch. I, based on just two third-century documents: a lists of lenders to the state and a list of donors, yielding 10 and 2 names respectively); then as recipients or dedicators of statues (II: 11 names), as donors of gifts to sanctuaries (III: 37, of whom Günther writes (70) "Dennoch ist zu konstatieren, dass von den 37 im Kontext sakraler Stiftungen bezeugten Milesierinnen nur wenige prosopographisch plausibel einzuordnen sind"); as priestesses (IV: 31), and in funerary inscriptions (V: unsurprisingly, the largest category but also the most diffuse: 74). Ch. VI has as its subject seven cases of nothai, daughters of Milesian fathers and foreign mothers to whom Milesian citizenship was granted. Ch. VII stands by itself, methodologically and thematically: an interesting study, by Lara Sophie Köcke, of the numerous (219 in total) wives, sisters, daughters and widows that came from Krete (the famous 'Kretereinbürgerung'), from neighbouring Myus and from elsewhere (maps, 292-3), as immigrants, and to whom Milesian citizenship was granted.

In each chapter, the women are first listed alphabetically, for ease of reference, then discussed chronologically. The grid-like organization of the material, although one can see why it has been necessary to impose some kind of order, at times obscures the total picture, since the same woman may be treated under separate headings. One example is that of Bitto, daughter of Lichas son of Hermophantos, of one of Miletos' most important third-century politicians. The much-discussed (but badly understood) funerary epigram in her honour (c. 200 BC) places her in Ch. V. She first crops up, however, in Ch. III. A partial treatment then follows in ch. IV, where the epigram is discussed from the perspective of Bitto's (probable) hydrophoria. Here, as in one or two other cases, one longs for a more integrated, and differently structured, discussion.

The book is carefully edited (I have found very few slips); Greek is transliterated or translated (including, in the footnotes, the texts of epigrams); there is a full index of names, though not of sources.