Lynette Mitchell: The Heroic Rulers of Archaic and Classical Greece 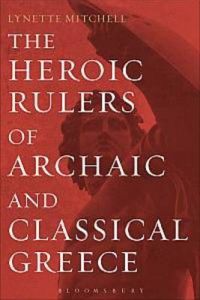 In the history of western political thought, ancient Greece stands out as the cradle of democracy. Nevertheless, in this same culture the word tyrannos appears for the first time. The book by Lynette Mitchell is a new, synthetic re-evaluation of the various forms of individual power which spread throughout the Greek world from the Dark Ages until the Hellenistic Era. The fundamental idea in this book is that the practice and ideology of individual power in Greece were based on a nucleus of heroic values, which remained constant for more than 600 years.

In the Introduction, following a short exposition of the objectives of the book, the author presents the sources upon which her analysis is based, both archaeological (important above all in relation to the Dark Ages), and literary, cited briefly. The first chapter ('Basileia and tyrannis: Exploding myths') opens with some references to the history of the word tyrannos. But how is basileus to be translated into modern languages? King, chief, prince, Big Man or something else? The point, ça va sans dire, is not only terminological, but also reflects a fundamental question of interpretation and historical definition. The modern terms used in translating basileus frequently tell us more about the political doctrine of the person who employs them, and about his own era, than facts concerning the real value of the word in ancient Greece. In incisive, instructive pages, Mitchell examines the main critical orientations, above all those of anthropological nature; she finally decides, using valid reasoning, to employ the word ruler in a general way. According to a common vision, the basileiai were distinguished from tyrannies in that they were characterized by heredity and lineage, whereas tyrannies had wealth as their main feature. Yet, objects Mitchell, as far as tyrants are concerned, ancestry is not difficult to invent in traditional societies, as is demonstrated by research in the field of oral history. What is more, the ancient basileis certainly were not lacking in the exhibition of wealth, as shown by the Lefkandi tomb of Iron Age date. We should rather say that, in the polis, the methods of unfolding wealth change. The tyrant must display sobriety, using wealth in a public function, for the service of the community. This affirmation may be accepted but, let us emphasize, it is not without exceptions. For example, the Orientalizing tyranny of Polycrates of Samos (the island of Samos is a geological fragment of micro-Asiatic territory) is characterized by a use of wealth which was also private and ostentatious. In certain contexts, the exhibition of luxury is charismatic.

The second chapter ('Arete and the right to rule') introduces a simple but fecund principle. Personal government, too, requires legitimization, which cannot do without negotiation with the community or with its specific components. In Greece, individual power was legitimized by the possession of arete in higher percentages than that of other members of the community. This means that "rulers not only traced their descent from heroes, but also themselves became living heroes for their communities" (58). This heroic, charismatic condition is evidenced especially by military victories, triumphs in the Panhellenic Games and the foundation of cities. To the testimonies adopted by Mitchell, I would like to add at least the Olympic victory of Anaxilas, tyrant of Rhegium, in the mule-chariot race (480 B.C.?), not so much to round out the information as because Anaxilas was active in the rivalry for leadership among the Western Greeks; his celebration of winning the Olympic crown displays traits of charismatic victory: Panhellenic feast (Heraclides Lembus, Pol. 55, p. 32, 9-11 Dilts), epinikion of Simonides (fr. 515 Page), and the minting of a coin (Pollux, Onom. 5,75). What is more, I would like to highlight another essential manifestation of superior arete: intelligence. A paradigmatically heroic trait (it suffices to think of Odysseus), ever present in the curriculum of a Greek tyrant to an exceptional degree and under various forms: comprehension of oracles and ciphered messages, astuteness and deception, wisdom and the ability to settle controversies, skill in capturing the kairòs.

The third chapter ('Ruling families') explores, in a keen, stimulating way, the relationships of negotiation of power in a more circumscribed, homogeneous setting, that is, the family ("individual rule, embedded in the family"). The author takes into consideration the collective monarchies of certain clans (Bacchiads, Aleuadae etc.), the relationships which regulate the succession to power, the marriage politics and the polygamy of individual rulers, the involvement of kinsmen in the management of government. Mitchell's convincing analysis results in a redimensioning of the role of primogeniture: the link between charisma and family succession is possible precisely due to the overcoming of the right of primogeniture. These considerations are based on a wide spectrum of testimonies ranging from tyranny to Spartan diarchy, as well as to Macedonian and Thessalian dynasties. Nevertheless, with regard to these arguments there are also some important possible integrations. Let it suffice for me to cite the exemplary cases of Carrotos (Pindar, Pythian Ode 5, 26) and Chromios (Scholion to Pindar's Nemean Ode 9 inscr., which Mitchell mentions en passant on 95), brothers-in-law respectively of Arcesilas IV of Cyrene and of Gelon (and Hieron and Polyzalus) of Syracuse, or also the conflict between Cleisthenes of Sicyon and his brothers (Nicolaus of Damascus, FGrHist 90 F 61). For marriage politics, Anaxilas is a case of great interest. Mitchell mentions the wedding of his daughter to Hieron, but not the matrimony of Anaxilas himself with Kydippe, daughter of Terillos, tyrant of Himera (Herodotus 7, 165, 3), nor Anaxilas' probable bigamy. [1]

In the fourth chapter ('Rulers in the polis'), the dialectical relationship between the government of one man and the institutions of the polis are underlined. One of the results is the distinction between absolute and personal power, in the sense that, in Greece, power was indeed individual, but not absolute, considering that it normally coexisted and interacted with other institutions (magistratures, assemblies, councils). The fifth chapter ('Epilogue: Athens, Ruling and arete') transfers the argument to Athens, the city which elaborated and bequeathed to the western world the image of the tyrant as the worst of all men, not without contradictions and even positive representations.

The book deals with a vast, difficult argument, complicated by the fragmentary nature of ancient sources and also by the large quantity of studies and critical approaches in modern times. Against this complex background, the agile book of Mitchell appears to be well-centered, coherent and not devoid of original results. With a solid theoretical foundation is combined an ample documentation of historical cases, although, as already mentioned, this is not always complete. Sometimes the author's treatment seems extremely succinct and even a bit hasty, for example, about the precious mention of tyrannos in the archaic poetry (Archilochus, Alcaeus and Solon, but also Semonides and Simonides, and in the multi-faceted use made by Pindar). But probably that is inevitable in a book which confronts such an extensive theme and which strives to affirm certain fundamental ideas.

It goes without saying that among these ideas is the fact that the opposition between legitimate basileus and illegitimate tyrannos is not original, but rather the result of a historical-political, literary and philosophical re-elaboration effected between the 5th and 4th centuries B.C. [2] Thus, Mitchell's invitation to re-evaluate the role and diffusion of monarchies in archaic and classical Greece is promising and fair, differing from the common tendency to consider them an extinct or completely secondary phenomenon.

As for one of the supporting themes of the book, that is, the heroic and charismatic statute of individual rulers, I certainly am in agreement. In my book 'Il tiranno e l'eroe', which is not present in Mitchell's bibliography, this idea is pivotal, explicit even in the title itself. [3] In my opinion, even the biographies of tyrants are heroic, from the oracles predicting their birth to their family relationships, their power and their deaths. Also heroic is the character which, according to my viewpoint, marks the tyrants' actions in good and evil: excess, which may result in hybris, may also appear in the form of "excess of aretè", to use a formula employed in the book under review (58).

It is evident that a complex, varied phenomenon such as the rulership which flourished from the Dark Ages until the Hellenistic Era presents elements of continuity as well as discontinuity. In an analysis, it is possible to accentuate either the first or the second. Mitchell's book, defined as "setting out deliberately to be provocative" (1), insists on continuity. From this premise arises also the most radical of the ideas which she proposes, that is, the disappearance of an "age of tyranny". Yet, concerning this specific point, I maintain that the concept of discontinuity cannot be totally discarded. All ancient testimonies, beginning precisely with those which were contemporary with the phenomenon, are in agreement in stressing the conspicuous passage that tyrannies represent and the extra-ordinary position of the tyrant in both a positive and a negative sense. This is a novelty which, reassuming the question in one sole aspect, takes on substance in the necessity of adopting an original word: tyrannos.

In conclusion, The Heroic Rulers of Archaic and Classical Greece is a book worthy of consideration. This is a vigorous invitation to re-examine certain common premises concerning rulership in ancient Greece. It opens new panoramas toward intensive ulterior research on the argument. [4]

[2] As a reference text is cited V. Parker: Tyrannos. The Semantics of a Political Concept from Archilochus to Aristotle, in: Hermes 126 (1998), 145-72. However, also worthy of notice, at least alongside the aforementioned work, is the classic by D. Lanza: Il tiranno e il suo pubblico, Torino 1977.