David N. Bell: The Library of the Abbey of La Trappe 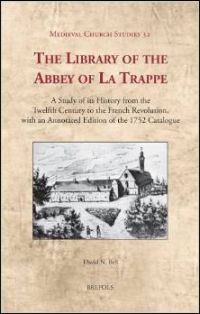 The library of a monastery often encapsulates the history and character of a community. Recent work on Cistercian libraries like Vauluisant has provided not only a wealth of bibliographical information, but also a privileged glimpse into the cultural activity of the monks who patiently built up such collections over the centuries. [1] David Bell's presentation of this catalogue is therefore a valuable addition to scholarship on La Trappe and the Cistercian order. It is important, however, to point out that by the time the 1752 catalogue was drawn up almost nothing remained of La Trappe's medieval library. So, unlike the case of Vauluisant mentioned above, La Trappe's library recounts an early history of serious disruptions and losses, followed by a later history that is intimately bound up with the life, character, and reforming activity of Armand-Jean Le Bouthillier de Rancé, abbot from 1664 to 1700. For readers interested in medieval La Trappe, this study will be a disappointment, but for readers interested in Rancé and his era it is a treasure trove.

A brief first chapter outlines the story of La Trappe's foundation as a Savignac house (around 1140), its incorporation into the Cistercian order (1147), a century or so of flourishing expansion, and a subsequent series of misfortunes: pillaging in 1361, fire in 1376, further instances of devastation and evacuation throughout the fifteenth century, and the crushing effects of the commendatory regime, which began in 1528. When Rancé, the last in this line of abbots in commendam, came onto the scene in 1664, there was no library or archives at La Trappe. Its few medieval manuscripts were perhaps re-acquired or received as gifts later on.

Chapter two, "Rancé and his books", is a condensed account of the reformer's life, which shows the intimate connection between his conversion, the renunciation of his large personal library, and the constitution of a new library for the community. Here and in the next two chapters on the evolution of the library up to the French Revolution emerge some of the tensions or paradoxes in what Rancé bequeathed to La Trappe and in the way his successors used and developed his legacy. Rancé's conversion was a gradual process, so some of the contents of his personal library proved out-of-place in their new home. The donor did some of his own culling and swapped some of the less appropriate titles for more fitting ones, but many books lingered as a reminder that Rancé's personal evolution led him to disapprove of much of the material he had bestowed on his new community. An even more fundamental tension had to do with Rancé's attitude toward studies. The collection shows the depth of its donor's learning and the extent of his familiarity with the controversies of his day, but these areas of personal interest were at odds with the concept of monastic life Rancé came to articulate in his own writings. Moreover, the monks' access to the library was severely restricted both during Rancé's lifetime and under the regimes of his successors. On the one hand, the well-stocked library at La Trappe shows an admirable religious spirit and singleness of purpose not always found in monasteries of the day. On the other hand, as Bell concludes, "most of the time, most of the books in the abbey library rested undisturbed on their shelves" (69).

Chapter six concerns the Cistercian dimension of the library at La Trappe. Apart from the works of Bernard of Clairvaux, a favorite of Rancé's, the collection contained practically nothing by early Cistercian authors. In general the choice of books was contemporary and eclectic, following the taste in France, where there was a huge demand for works of spirituality, especially the pocket-sized treatises so typical of the period. At the same time, the library did hold Cistercian historical and documentary works of the later period, along with Strict Observance literature, including works by Rancé and other authors of the La Trappe community. This chapter six is, in fact, an excellent overview of this Trappist literature.

The bulk of the volume is an edition of the 1752 catalogue (over 500 of its 643 pages), a hand-written document now preserved at the Rouen Bibliothèque municipale as Manuscript 2240. The catalogue has two parts, first a listing by subject matter, then a listing by author in alphabetical order. In addition to being a fundamental resource for understanding the La Trappe community and its history up to the French Revolution, this edition is also a valuable case study on the way libraries were organized during this period. The most significant aspect of the edition, however, is Bell's extensive annotation of the entries, especially in the second part, the alphabetical catalogue. The sketchy information of the original listing is filled out where possible with clarifications regarding the authors and the various editions of the works recorded. The catalogue thus becomes a rich mine of information about both the literature generated during the Trappist reform and the main spiritual and theological writings of the period.