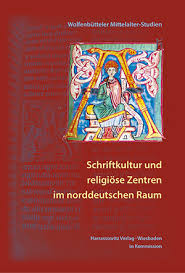 In recent years the so-called 'spatial turn' has entered scholarly debate whereby researchers focus on diverse questions linked to the embedding of the production and reception of literature and the transfer of knowledge in cultural landscapes ('Kulturlandschaften'). Schriftkultur und religiöse Zentren im norddeutschen Raum brings together eleven very diverse contributions by renowned scholars, aiming at elucidating different sorts of texts and their specific literariness, as well as the concrete processes for the transmission of knowledge and the exchange of literary texts in northern Germany. The editors wish to understand the medieval books and texts produced by and for (female) religious in that immensely lively and varied region by putting them in their historical, literary and social context, and by focusing on the important religious centres: monasteries, chapters, and (parish) churches. The focus of the volume is deliberately interdisciplinary, including several aspects of the concept of 'Raum': physical space, the perception of boundaries, the dichotomy of inclusion and exclusion, any leeway for male and female religious within the strictly defined frames of enclosure and liturgy, and so on.

The collection opens with a monumental essay by Hedwig Röckelein, who provides an extensive 'tour d'horizon' of the development of the religious landscape in the northern German regions between the ninth and the fifteenth centuries. She shows how both regular and secular religious institutions played a central role in the literary and cultural production of these regions. Her essay focuses by and large on three time periods, discussing religious institutions that played an instrumental role in literary culture in each era. Although the volume intends to study religious houses within their own regional context, independent of modern national boundaries, Röckelein mainly focuses on the religious institutions within the current frontiers of Germany and pays little attention to the eastern Dutch region which also formed part of that cultural area. Nevertheless, the wide scope and the huge number of references make this essay compulsory reading for anyone who studies medieval religion and literature.

The next two essays focus on the ways Dominican nuns were able to deal with liturgy, albeit in two different ways. Felix Heinzer discusses how liturgy (like monastic enclosure itself) provided both a normative and a restrictive framework, as well as triggers for personal inner religious experiences. How the nuns of Paradies bei Soest in the fourteenth and fifteenth centuries practically entered into dialogue with the liturgy is demonstrated by Jeffrey Hamburger. Four Graduals produced by the nuns contain hundreds of Latin inscriptions, which show their knowledge of an impressive array of learned sources. Even more amazing is the fact that the nuns quite literally drew themselves into the manuscripts by putting their images into the initials. Thus they showed not only a high degree of Latinity, but also an exceptional self-consciousness about liturgical performances and craft traditions within the monastery.

Britta-Juliane Kruse deals with the physical space and material culture of the 'Augustiner-Chorfrauenstift' Steterburg. She edits and closely studies the Chapter's 1572 inventory, which was made within the context of the Reformation which hit so many houses in Northern Germany. By comparing the information in the inventory with extant furniture and objects from surrounding religious houses, she reconstructs the furnishing of the Chapter's spaces and gives a fine impression of the objects owned and used by the canonesses of Steterburg (furniture, finery for statues, liturgical objects, and so forth). By doing so, Kruse shows us the fascinating advantages of research in the intersection of archival history and archaeology.

Franz Karl Prassl's essay takes us beyond the walls of individual monasteries. He meticulously discusses the musicological and textual features of a Gradual written in the southern abbey of Sankt-Gallen at the request of Sigebert, bishop of the northern town of Minden. He demonstrates how Codex Guelf. 1008 Helmst. is the result of a subtle interplay between commissioner and producer that led to the imposition of the Sankt-Gallen interpretation of Gregorian chant on Minden.

Patrizia Carmassi demonstrates the importance of systematic cataloguing projects for our knowledge of medieval writing culture and cultural transfer. Her essay offers the first promising results from the inventory of the manuscripts from Halberstadt. Through a combination of palaeographical and codicological manuscript research and archival research on charters Carmassi is able to offer new insights into the likely existence of several writing centres in Halberstadt, which (most probably) were linked to the religious centres in the region.

Another important factor for the transfer of text and culture, obviously, is language. This aspect is discussed by Almut Schnieder, who explores the function of Latin, the vernacular, and regional dialects, and, more particularly, the relations between those linguistic variants. She produces a very interesting argument about how regional dialects from the thirteenth century onwards influenced the cultivation of regional identity.

Bertram Lesser and Rita Schlusemann focus on the Devotio moderna. From the beginning, the production of manuscripts, the building of libraries, and the systematically created programme of spiritual exercises can be considered the most important features of modern devout spirituality. Lesser seeks to show how the Devotio moderna (in comparison with the observant Bursfelder Reform) influenced the distribution of books by buying, copying and donating them. The examples he gives, however, are too few to come to a nuanced picture of the relative importance of these three means of textual transfer. Lesser is very well aware of this lack himself, stressing the importance of the analysis and reconstruction of the libraries of parish churches and convents.

Whereas Lesser focuses on the literature from the observant movements in the German region, Schlusemann takes a broader perspective by considering the complete Dutch-German border region which was under the influence of the Devotio moderna. She illustrates how several texts which belonged to the canon of modern devout literature (libri devoti) were transmitted in both Dutch and German dialects, and justly argues in favour of a new regionally oriented approach in studying medieval literature. While Schlusemann studies the transmission of originally Dutch texts into German, Tuomas Heikkilä focuses on the transmission of German texts in the Finnish regions. Like Jan Brunius's essay on the fragments of German manuscripts in Sweden and Finland, his contribution finds itself at the periphery of the volume.

In sum, the volume provides a multi-faceted overview of the incredibly rich literary and religious culture in the Northern German region. Several essays open up new and fascinating areas of research. The editors' clear choice for a broad range of interpretations of the concept of 'Raum' is courageous. As a result, however, the collection gives a somewhat random impression. In my opinion, this could have been easily overcome if the introduction had provided a clearer link between the theoretical framework and the individual essays. Nevertheless, the volume most certainly opens up interesting new perspectives for future research and the editors are to be much congratulated. It convincingly shows the added value of a multi-disciplinary approach for our knowledge of religious and intellectual culture of the Middle Ages.