Elizabeth Goldring: Robert Dudley, Earl of Leicester, and the World of Elizabeth 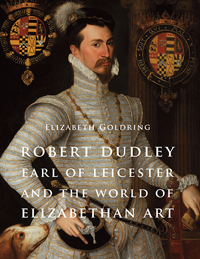 Recent attempts to redefine the Renaissance chronologically and geographically have been able to show that this was a period more diverse and dynamic than the traditional nineteenth-century view of a Florentine Renaissance along Vasarian theories would seem to allow. In addition, such research has offered proof that Renaissance and Reformation, far from being opposites, were intricately intertwined and that the question of what came first is probably a moot point. From at least the thirteenth century there had been attempts to reform religious, educational, constitutional and social conditions throughout Europe. Far from being cut off from up-to-date developments, early modern England took a keen interest in the latest cultural, religious and political trends that had brought a number of (relatively) new, ambitious families - among these the Tudors - to prominence and, eventually, royal power.

Among other causes, the English Reformation was directly motivated by dynastic concerns - vital for a new dynasty of less than perfect pedigree, ruling by right of conquest after a bloody civil war. Conversely, economic reasons as well as the religious and intellectual climate of the long fifteenth century had already laid the ground for reformatory controversy of some kind. While the altars were stripped and bouts of iconoclasm took place in the English realm as typical effects of Reformed or Protestant changes, the figurative arts nonetheless continued to attract patronage in Tudor times after the break with Rome. Some sixteenth-century Protestants may have had prejudices against Catholic Italy as a hotbed of superstition - a view still shared on occasion by English grand tourists of the 1700s - but Robert Dudley, Earl of Leicester collected religious art according to models presented by Henry VIII, Thomas Cromwell and Queen Elizabeth (20-21). In particular, portraiture and monuments celebrating praiseworthy deeds were commissioned regularly for exhibition in a secular as well as ecclesiastical context.

Although Elizabeth Goldring describes Robert Dudley's confessional affiliation as "a particular strand of Elizabethan [moderate] Puritanism" (17), she also notes how well-connected he was to multi-confessional-networks of patronage both at home and on the Continent. Religious and political disagreements seem not, as a rule, to have hindered the exchange of information among courtiers or with royal patrons of the arts (16). In the case of Leicester who imported works of art from the Low Countries and invested in overseas expeditions to set up trade routes and colonies, such patronage was nearly always tied to practical, economic and political concerns and goals in the City of London as well as in Europe. It also frequently touched on religious aspects, for example, when he offered refuge and work to distinguished Italian Protestant expats or when he appointed university-trained Protestant preachers as his household chaplains.

Nonetheless, for over four centuries, the history of Robert Dudley has been discussed in connection with the Tudor dynasty and in particular with his relationship to the last Tudor queen (43-45). Scandal and personal tragedy have dominated debates about the remarkable career of this man as courtier, explorer, and politician. That he was also a major patron of the arts and collector of works of art during the English sixteenth century will only come as a surprise to those who still equal Reformation with iconophobia and consider the English court a cultural diaspora at the very rim of the civilised world (24-27). An interdisciplinary study of Dudley's patronage was, therefore, long overdue. Goldring's analysis finally brings together existing debates focusing on the English history of collections before and during the era of the Grand Tour (see, for example, the publications by Edward Chaney and Richard Williams) with those on portraiture (aristocratic: Roy Strong; middle-class: Robert Tittler) and anchors them in the intellectual and political milieus of sixteenth-century England and continental Europe.

Dudley, youngest scion of a family implicated by the ill-fated plot to make Lady Jane Grey the first Protestant queen of England, might easily have found an early death on Tower Green. Nonetheless, he managed to survive and to rise in rank: created Earl of Leicester in 1564, Dudley continued as the queen's longest serving favourite up to his death in 1588. He certainly made no secret of his allegiance to the queen, reflected by the omission of ancestral Dudley paintings or by series of royal portraits generally to be found in early modern collections in favour of Elizabeth's frequently paired with his own (184-203).

Indeed, he took particular advantage of the political possibilities presented by portraiture. As pointed out by Goldring, on average Dudley sat for his portrait every eighteen months between 1558 and 1588 (8). Queen Elizabeth and Dudley's nephew, Sir Philip Sidney, were the only two contemporaries to avail themselves of this medium with a similar frequency and application. In Dudley's case, as we also learn from Goldring's richly documented and well-illustrated book, he also used his portraits as a kind of calling card, gifts to the members of his growing network (8-14). He collected paintings, maps and drawings (14-17) and engaged in the courtly festival culture so beloved in the sixteenth century. The appropriate display of art and festivities, which Leicester helped to shape for the Elizabethan reign, formed another important part of his patronage: Kenilworth Castle (167-203), Leicester House and Wanstead Manor (205-235) were set up to receive and exhibit works of art and important guests. For example, at Kenilworth "princely pleasures" were organised for the queen on progress in 1575.

Cultured to a degree that included an appreciation of artistic technique and well-travelled by means of a European grand tour, Philip Sidney shared his uncle's intellectual interests and took part in what might be defined an English "Academy" at Leicester House. He also seems to have acted as a scout for the latest cultural trends and for suitable works of art on Leicester's behalf (193 and 227-235). In sum, Leicester and his circle behaved like their European counterparts, i.e. Catholic as well as Protestant aristocrats, partly prompted by their love for splendour and art, partly driven by a desire to advance their political aspirations, to redeem their families' trustworthiness and to declare their own faithful allegiance to their overlord by means of collections and cultural politics.

At Leicester's death without legitimate issue in 1588, his collection was distributed between Penshurst and Wilton (247). Documentation survives "scattered throughout private and public collections in Britain, Europe and North America" (25); three appendices, or rather catalogues, provide transcriptions and commentary with a focus on paintings and other works of art at Kenilworth (App. I, 255-263), at Wansted Manor (App. II, 264-282), and at Leicester House (App. III, 283-311).

Complicated though the archival research will occasionally have been the resulting book on one of the foremost patrons and collectors of the Elizabethan age is a timely contribution to our knowledge of art collecting and display in early modern England. By tracing and analysing the archival documentation, Goldring has also deepened our understanding of the perception and usage of art during the very early development of the English Great House. Leicester's collections may have been thoroughly exceptional, as was probably his level of art appreciation, but it is important to remember that he was not the only English collector of the Tudor period.