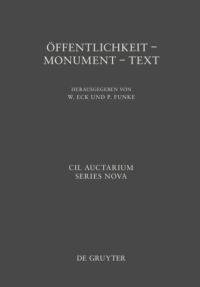 The present volume contains the acta of the fourteenth quinquennial congress of Greek and Latin epigraphy, held in Berlin over four days in August 2012. The volume falls roughly into two halves. The first half (77-429) consists of fourteen substantial papers delivered in plenary sessions at the congress; the second (431-729) contains short summaries (each around 1,000 words in length) of 103 papers given at thirteen thematic panels. The volume concludes with Jürgen Hammerstaedt's Abschlussrede on the Epicurean inscription of Diogenes at Oinoanda (731-55), a list of posters presented at the congress, and an alphabetical list of contributors.

The main theme of the congress - inasmuch as a vast gathering like this can have a single guiding theme - was the relationship between epigraphic texts, the monuments on which they were inscribed, and their physical contexts ("display") in the public or private sphere. Epigraphic display in the Graeco-Roman city was the subject of the first dedicated plenary session ("Stadtbild im Wandel"). The richest single site in the Greek world from this perspective is surely the agora of Athens, source of some 7,638 excavated inscriptions, many of them discovered in situ. The highlight of John Camp's discussion of the placement of inscriptions in the Athenian agora (91-104) is a new Hellenistic statue-base from the vicinity of the Stoa Poikile, in the form of a pile of captured Macedonian weapons. This extraordinary monument strongly confirms the impression given by literary sources that this corner of the agora served as a kind of "repository of Athenian military commemoration". Christian Witschel's study of urban epigraphic display in the Roman west (105-33) is focussed on two well-excavated sites, Segobriga in Hispania Citerior and Thamugadi in Numidia. Of particular interest is Witschel's typology of ancient viewers' responses to epigraphic monuments, ranging from idle browsing (the "flaneur") to complete obliviousness. The same theme is pursued further in Charlotte Roueché's fascinating paper on the use of civic space in Roman Asia Minor (135-58), as revealed in the adaptation and restoration of old epigraphic monuments and through various kinds of non-verbal graffiti.

Epigraphic display, this time in non-urban contexts, was also a major theme of the third plenary session ("Epigraphik ländlicher Räume"). Stephen Mitchell identifies a distinctively rural form of Selbstdarstellung in the rich early Christian funerary epigraphy of central Anatolia (275-97). As Mitchell persuasively argues, Phrygian phanero-Christian epitaphs of the mid-second to the mid-fourth century AD "helped to delineate rural Phrygian society as sharply as the building inscriptions and public honorific statue bases provided a profile of the senatorial class in the important cities and power centres of the Roman empire". We can, unfortunately, seldom say much about the precise physical context of non-urban epigraphic display in the Roman world. Rural Pisidia is a rare exception, thanks to the extensive use of rupestral inscriptions, interpreted by Guy Labarre and Mehmet Özsait (347-74) as a relic of indigenous epigraphic practices. Be that as it may, it is clear that the use of epigraphy in rural parts of the Roman empire saw far greater regional variation than is to be found in urban contexts; even within particular provinces, rural epigraphic practices differ markedly from one micro-region to another, as shown by Ralph Haussler in his study of non-urban epigraphy in Gallia Narbonensis (323-45).

The importance of epigraphy as a source for language contact and multilingualism in the Graeco-Roman world has been an increasingly fertile field of epigraphic research: one thinks, above all, of Alex Mullen's ground-breaking work on language and identity in Mediterranean Gaul. [1] Jonathan Price's study of overlaps and discontinuities between Greek, Hebrew and Aramaic epigraphic cultures in the Roman and Late Roman Near East (183-96) indicates how much remains to be done for other parts of the Mediterranean world. A still broader perspective is taken by Stephan Seidlmayer, in his innovative diachronic study of multilingual epigraphic practices in the region of the first Nile cataract, from the late prehistoric period to Napoleon's invasion of Egypt (197-230). Seidlmayer brilliantly draws out thematic, situative and functional continuities and parallels in the uses of epigraphy at this liminal site across a five-thousand-year period: who else would have thought to compare the Philae victory-inscriptions of the Sixth-Dynasty pharaoh Merenre (third millennium BC), the Roman poet Cornelius Gallus (29 BC) and the emperor Bonaparte (AD 1798)?

Perhaps the single most rewarding paper in the volume is the much-expanded version of Stefan Rebenich's opening address, "Berlin und die antike Epigraphik" (7-75). The chequered history of the two great Berlin epigraphic corpora, the Inscriptiones Graecae and the Corpus Inscriptionum Latinarum, is well known. What Rebenich shows is how closely the fortunes of the two projects have been tied up with wider trends in European history over the past two centuries. The two World Wars, the convulsions of Weimar, and the post-war division of Europe did not merely place institutional and financial strains on the progress of IG and CIL (though they certainly did that too). Dependent as they are on systematic international co-operation, the two corpora have suffered disproportionately from political disunity in Europe: it is no coincidence that the great age of "national" epigraphic corpora (RIB, Inscr.It., RIU, IGBulg, etc.) dates to the middle years of the twentieth century. The welcome revival of both IG and CIL in the years since 1990 mirrors the broader re-integration of the European academic community since the fall of the Wall.