Wendy J. Turner: Care and Custody of the Mentally Ill, Incompetent, and Disabled in Medieval England 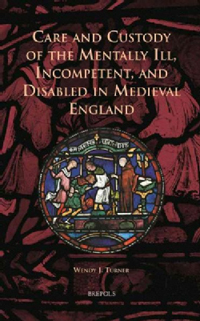 Studies of madness in the Middle Ages have often used literature, art, medical theory, and theological writings to emphasize the differences between medieval thinking and our own. This book presents a different picture, one that emphasizes some of the remarkable ways in which medieval English society was actually similar to ours, at least in certain practical ways. Wendy Turner has done a huge amount of work to compile and classify the surviving records regarding the mentally disordered and mentally incompetent over a period of ca. 300 years in England. She has dug through the files of The National Archives (formerly the Public Record Office) in Kew, England. Altogether, by my count, she has found 360 cases of mental incompetence or insanity, the vast bulk of them from the period after 1250 to 1500. About 20 % (again, by my count) involved alleged crimes, whose perpetrators claimed (or whose representatives claimed) that they were furiosus, lunaticus, freneticus, or sciens nec bonum nec malum. The huge majority of cases (almost 75 %), however, resulted from situations in which a landlord (usually a person of noble or at least gentle status) was not able to fulfill his or her obligations to manage lands or business operations responsibly. In these latter situations the unfortunate person was usually described as fatuus, idiota, non compos mentis, ignorans, or non sane mentis. As one can tell from these terms, medical descriptions were rather promiscuously jumbled together with legal and philosophical terms to describe both violent and passive forms of mental incapacity.

Turner provides a brisk summary of English medical and legal thinking about insanity and mental disabilities that were often noted beginning at birth but that could also result from a blow to the head, illness, advancing age, or other unknown causes. In an appendix Turner provides a lengthy list of the terms used to describe the mentally impaired and disabled, some in Old English or Middle English, some in Middle French or Norman Law French, and many in Latin. Before 1250 such cases were regularly dealt with privately; a family usually appointed a family member or friend to assume guardianship over the mentally incompetent person, not in order to provide care or therapy for his or her condition, but to manage property. Of course, such arrangements might be abusive and negligent, resulting in the splintering of estates, the excessive exploitation of villages and serfs, and the ruin of manors, farms, and business operations. Partly for those reasons but mainly because the crown sensed that appointments of guardians could provide a lucrative source of favors and income, this private system of wardship was replaced after 1250 by a system of royal wardship in which the king rewarded some nobles with a grant of guardianship from which various sorts of emolument could flow. In this manner the king was able to pay off political debts and secure the loyalty of supporters without needing to raise cash or expend other resources. The official law and legal authorities of the XIIIth and XIVth centuries agreed that the king was not to profit from the use of royal prerogative wardship, but in practice there were many ways that the system worked to the advantage of both the crown and its beneficiaries.

Turner's book marks, therefore, a significant advance in our understanding of medieval wardship and the administrative arrangements to deal with landlords who were unable or became unable to manage their affairs. We have had previous histories of wardship, to be sure, but no one has hitherto gone through such a large series of cases to see how the law was implemented in specific situations. Because so much of her evidence derives from land and estate management, Turner cannot say much about the actual care or custody of the mad, and especially about commoners who became mentally disabled; but the 74 cases of criminal insanity (mostly from the period 1251-1350) do provide some welcome detail concerning insanity and the "insanity defense" in medieval England. Generally speaking, if furor or insania could be proved, the law in practice prevented the execution or other sorts of punishment for defendants, but if a maniac remained a danger to himself or to others, he might be confined or restrained for as long as was deemed necessary. The priorities of royal prerogative wardship were to maintain the proper management of property and the smooth succession of ownership, not the care, treatment, or understanding of the mentally troubled. Such are the limitations of the records Turner has consulted.

Another limitation of this book, however, is of Turner's own making. Although she is a diligent researcher, her writing style is often inexact or verbose, given to repetitions and sometimes to exaggerations. Instead of referring to persons with mental disabilities or illnesses, she sometimes refers to persons with "mental conditions", a term that could refer to anyone. She writes, for example, "Most husbands with ongoing mental conditions had lucid moments; otherwise they would not have been married". Her use of statistics is also often vague; she claims, for example (79), that "even with a 15 per cent error corrective, the statistics are significant". What exactly does that mean? To take another example, Turner claims (110) that "Almost exclusively, violent crime was caused by the temporarily insane." By this I think she means not that most crimes in England were committed by the criminally insane, but that among the insane charged with crimes, most if not all were persons who had fallen into insanity rather than being mentally disabled from birth. Occasionally the author seems to confuse legal categories with social reality, so that she alleges, for example, that "few mentally incompetent persons committed violent crimes willingly, unwittingly, or accidentally" (114). But "normal persons [...] committed violent crimes while mentally deranged regularly it seems" (114). Or again, "Non-violent crime was not possible for mentally incompetent persons, unless lucid [...]" (139), a statement of legal theory but certainly not of lived reality. Similarly Turner alleges that mentally incapacitated persons could not commit all sorts of felonies, on the grounds that robbery and burglary seemed to require such premeditation that they were "not possible for a mentally impaired person" (127). Such imprecise and confusing statements along with misspellings and ungrammatical sentences reveal that this valuable book would have benefited from the services of a vigorous copy editor. Even so, Turner's scrupulous citation of hundreds of records and her detailed recounting of specific anecdotes casts a most welcome light upon some of the most poorly understood corners of the medieval world. Instead of difference, we will recognize these medieval Englishmen as altogether familiar.