Philip A. Stadter: Plutarch and his Roman Readers 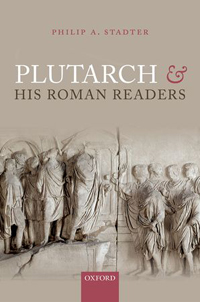 Philip Stadter has published steadily on Plutarch for nearly fifty years, since he proved in a fundamental study that the Mulierum Virtutes was the fruit of original reading, and not copied from an earlier compilation (Plutarch's Historical Methods, 1965); this helped to shape my own views in writing Plutarch and Rome (1971), and both books originated as dissertations directed by Herbert Bloch. The present work reproduces twenty-three of Stadter's many articles. Most have appeared since 2000, and some are not yet out; two that were originally in Italian he has translated into English. There is very little overlap, and some of the originals have been shortened or altered to fit the overall scheme. The quality is uniformly high: Stadter's knowledge of the relevant literature is comprehensive, and the bibliography alone takes up nearly thirty pages.

Stadter's stance is firmly, even startlingly, conservative. Though acknowledging that Plutarch has a persona to present ("the gentle simplicity that marks his self-presentation throughout his works," 209), Stadter never invokes "subalternity" and never reads "against the grain." Instead, he takes the view that the Plutarch presented to the reader is close or identical to the real Plutarch, a writer securely anchored in his own time, and a man with a purpose: "to set before contemporary readers and himself great figures of their common tradition ... as an inspiration for the political actors of his own day" (332). As the book's title suggests, the emphasis is not so much on the Greek reader as the Roman. Stadter is sensitive to Plutarch's wide connections among the Roman ruling classes, particularly his close friend Sosius Senecio, confidant of Trajan and consul for the third time in 107. He also emphasizes (and this is perhaps more original) Plutarch's own life-experiences, known or likely: Nero's visit to Greece in 67 which he may well have witnessed, the civil wars of 69 and 70, the turbulent reign of Domitian ending with his assassination, the precarious accession of Trajan.

This Rome-centered approach produces some of the best chapters in the book. Stadter subjects the Lives of the Caesars, of which only the Galba and the Otho survive, to a short but persuasive examination (ch. 3). He notes that this work would have been "a major project," and might have provided a template for the writing of the Parallel Lives. He also wishes to date it earlier than usual, to the reign of Vespasian rather than of Domitian (but it cannot be earlier than about 75, the presumed date of Mestrius Florus' proconsulate). In another excellent chapter Stadter reads the Symposiaca or Quaestiones convivales, dedicated to Senecio, as inculcating an ideal for "the ethical underpinnings of society" (ch. 7). Elsewhere he notes how Plutarch insists on the moral qualities, positive and negative, of his "heroes," not merely as historical figures but as men engaged in practical politics (ch. 15). A very interesting study of Plutarch's Numa, not a life that usually attracts much attention, brings out Plutarch's ideal of a ruler who instills civil concord by astute use of religion (ch. 17).

Consistent with this approach is Stadter's original and striking chapter on the notes taken by Alexander Hamilton, one of the framers of the American Constitution, in the winter of 1777/78, when Hamilton was serving as captain of the New York Artillery and when the outcome of the war with Britain was far from certain (ch. 22). In the blank pages of his paybook, used to record payments to his troops, Hamilton entered notes on two pairs of Lives, the Theseus and Romulus and the Lycurgus and Numa, the first two founders of their cities, the second two supposed to have formulated codes of conduct and ethics for posterity to follow. Here Plutarch's influence reaches beyond his own purpose to touch a statesman in the New World.

Stadter's Plutarch is in the end not so far from Rudolf Hirzel's Plutarch of a hundred years ago: "Plutarch wollte von der Geschichte lernen nicht bloss für die Erkenntnis, für den Verstand, sondern auch für das Handeln, für den Willen" (Plutarch, 1912, 201). So one will not go to this book for novel or paradoxical opinions. One of the rare omissions in the bibliography is John Scheid's À Rome sur les pas de Plutarque (2012), with its adventurous hypothesis that the Roman Questions can be read as guide to the city of Rome, and that the topics discussed follow an itinerary around the city's monuments. Otherwise there are very few omissions or errors. The discussion of Arrian (ch. 14) overlooks the interesting inscription from Cappadocian Comana in which a synodos of Apollo honors him as a "most pious and just governor" (Ferit Baz, ZPE 163, 2007, 123-27; SEG 58, 1665); and Plutarch's Roman names did not include "Florus" (73 n. 19, 233). Yet this is a reliable and sure-footed study, a valuable summation of half a century's devoted work.