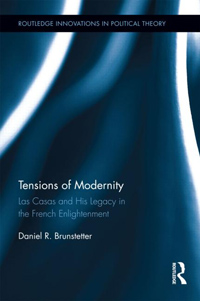 Daniel R. Brunstetter's Tensions of Modernity traces the influence of early modern Spanish debates following the discovery of the New World on Enlightenment and contemporary ways to deal with the "other". By doing so, the author aims to question the tensions inherent to modernity (a philosophical period "distinguished by universal claims about the common rationality and moral egalitarianism of all humans" <1>). According to Brunstetter, problems arise when specific groups resist or reject these values, which might lead to what he terms "legitimized illiberalism". Certain "others", defined as those whose way of life and beliefs "challenge, to the point of violating, what one holds to be universal laws" (3), can thus be justifiably excluded for their failure to adhere to these universal claims to equality.

Europeans dealt with unacceptable customs and moral behaviours in two ways: either by "cultural othercide", that is, by assimilating these inconvenient "others" and eradicating their own culture and way of life (5), or by "physical othercide", that is, by killing them. The main goal of this book is to bring to light the ways in which assimilationism has led to the justification of unequal treatment.

Early Spanish and Portuguese claims denied dominium to the natives, on the basis that they were pagans or, in the Aristotelian language, natural slaves. But, as shown in the second chapter, the affair of the Indies - the debate which aimed at establishing the political status of the natives - questioned this position, although, according to the author, discourses in favour of the natives relied on a complete lack of curiosity about their societies and cultures. Most thinkers ultimately agreed that the natives should in any case be assimilated to Christianity; differences were to be erased.

This is most visible in the writings of Francisco de Vitoria. According to the author, even though Vitoria recognized that the natives had true dominium, he ended up distinguishing between two kinds of barbarians: those who were reformable and could be assimilated into Christian and European values, and those who resisted, against whom, Vitoria ambiguously argued, a just war could be led. Either way, the natives would end up being the victims of either physical or cultural "othercide".

The same tension can be found in the thought of Bartolomé de Las Casas, discussed in chapter 4. Famous for his defence of the Indians' rights, Las Casas also, according to Brunstetter, relied on the eventual assimilation of the natives and on their "abandonment of their otherness", a position which "does not force him to rethink the dominance of Christianity as a whole" (64, 67). Ultimately then, Las Casas still promoted cultural othercide (by persuasion rather than by force) in favour of Christianity.

Las Casas had an influence on French Enlightenment writings about the natives, the topic of chapter 5. According to Brunstetter, although there was a renewed curiosity and sympathy for native customs in the eighteenth century, this was paired with a growing colonial presence and confidence in the superiority of European values. By analysing various authors (Voltaire and Cornelius de Pauw), Brunstetter shows that, again, either cultural "othercide" (through a paternalistic outlook and a confidence in reason) or physical "othercide" (the natives were degenerate and incapable of progress and thus doomed to disappear) were used to resolve the tension in the relationships with the "other".

According to the author, beliefs shifted over the course of the eighteenth century from cultural "othercide" to physical "othercide", allowing for the emergence of "legitimized illiberalism", addressed in chapter 6. The American Revolution led to the conviction that the former ills of colonisation would be compensated by new values (freedom, democracy), which the few remaining natives could only embrace. Those who rejected civilization would have to be exterminated. Whereas previous discourses lent little or no agency to the natives, who would either be irresistibly attracted to European civilisation or passively suffer at the hands of Spanish fanaticism, in eighteenth-century discourses, the natives were considered to have full agency to reject civilisation. If they refused to assimilate, this meant that they free-willingly excluded themselves from the predominant system of values, a stance which put them beyond the limits of equality and legitimated "illiberal treatment" (163).

The conclusion draws avenues for further reflection on contemporary issues linked to this "inherent paradox" of modernity. For the author, the Western promotion of equal rights is intrinsically linked to claims of moral superiority which can lead to "exclusionary rhetoric" (173). Looking at the historical context in which our belief in universal Western values developed might help us to be more self-conscious about the ways in which we deal with the "other".

The book raises interesting issues, and offers a useful interpretative framework for thinking about the ways in which we deal with the "other" today. Although the bibliography reflects a wide reading of intellectual historians dealing with such issues, the book was clearly written for an audience of political scientists, and less for specialists of the intellectual history of the early modern period (the best account on this specific topic remains Anthony Pagden's The Fall of Natural Man). This may be the reason why the terminology used is sometimes problematic from a historical perspective. For example, imposing the label "other" on all natives seems doubly questionable. Firstly, the peoples inhabiting the Americas were incredibly varied, and their interactions with Europeans even more so. Missionaries who entered in contact with these groups also differentiated between them. Secondly, as the author himself argues in the case of Las Casas, missionaries often presented the natives as similar to Europeans, to show that they would easily be converted. This insistence on similarities was, within a Christian framework, more than a rhetorical device. "Otherness" might thus not be the best heuristic tool to deal with Europeans' perception of the natives in the early modern period. Perhaps a more detailed analysis of the religious context might have been helpful in this regard.

The idea of assimilation is equally problematic. If assimilation into the Christian community was fundamental for missionaries, assimilation into the European community was not necessarily so. Many missionaries, above all the Jesuits, considered it necessary to segregate native communities from European settlers, as they would have a nefarious influence on the natives' conversion. If missionaries failed to recognise native customs as "valid on a equal plane with Christianity" (86) - which seems hardly surprising for the defenders of a monotheist religion - they nevertheless differentiated between acceptable and inadmissible customs. The perception of Montaigne and Diderot, who, according to the author, offered a more pluralistic approach and were more curious about the natives' customs was actually shared by numerous missionaries.

All in all, this is a very valuable reference for anyone interested in questioning the ways in which "the West" has been dealing with members of different cultures and religions. The author provides an insightful account of the historical roots of the fundamental discriminatory strand embedded in our Western system of values.