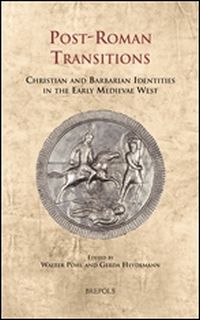 Ethnic identities remain both a source of fascination and a point of considerable contention for historians of early medieval Europe. Successive stages of these debates over ethnicity, Romans and barbarians, and the formation of the post-imperial West have been framed by studies conducted under the aegis of Vienna's Institut für Mittelalterforschung. Post-Roman Transitions is the latest in a long and distinguished series of volumes on ethnicity coming out of Vienna and the companion volume to a previous Sammelband. [1]

In contrast to the cosmopolitanism of some recent (and ongoing) exercises in Viennese Identitätsforschung [2], Post-Roman Transitions is restricted to what have been its core territories: the regna and gentes of early medieval Europe. The rationale behind this decision becomes clear from Walter Pohl's typically elegant introduction. Post-Roman Transitions takes as its point of departure the problem of how ethnic identification went from being an indicator of otherness in the Roman Empire to a (and eventually, the) "point of reference" (12) for a legitimate political entity in the Latin West. Pohl's introduction sketches out three potential fields of inquiry (which, somewhat confusingly, do not correspond to the volume's two parts): ethnic identities as a framework for political legitimacy (8-17); the intersection of Christian and ethnic discourses of community (17-26); and the valence (or otherwise) of the classical Roman / barbarian dichotomy after the fall of the Roman Empire in the West (27-35).

The first three papers in Part I ("Scripts for Identity - Resources of the Past") tackle Christian discourses of (ethnic) identity. Albrecht Diem argues that the (re)foundation of the monastery of St Maurice at Agaune represented "the key moment for the creation of a Burgundian kingdom that transcended Roman and barbarian identities" (51). Diem's close analysis of the circumstances which led to the establishment of this influential forerunner of what became the dominant form of Frankish monasticism is outstanding; his reading of specifically ethnic concerns into its formation sometimes seems a bit forced. Alexander O'Hara's imaginative piece on alienation and identity in three seventh-century monastic authors is similarly impressive. O'Hara's demonstration of the subtle use of discourses of exile to claim authority as both an outsider and, paradoxically, a central figure within a Christian community chimes with a number of recent studies of late-antique Christian exiles. [3] Jamie Wood also bridges ethnic and Christian discourse in a study of various textual strategies adopted by Isidore of Seville in his histories. Wood suggests a number of ways in which Isidore privileged the Visigoths as an exceptional people and downgraded the Romans who had tended to monopolise that role in previous historical accounts.

The second half of Part I benches Christian perspectives to turn to the interplay between ethnic and regional identities. John-Henry Clay examines ninth-century West Saxon stories of migration, considering their possible import for the fifth century and their likely elaboration in the seventh. In one of the standout pieces in the volume, Francesco Borri pursues a different sort of origin story: the foundation myths of medieval cities in the Adriatic. Borri persuasively argues that stories of flight from bloodthirsty barbarians were a means of explaining discontinuity of settlement; most intriguingly, these stories both built upon and responded to origines gentium. Finally, Marco Stoffella explores the (limited) possibilities for the investigation of an early medieval Tuscan identity in the light of the so-called Frankish Table of Nations.

The papers in the first half of Part II ("Romanness and Otherness - Signs of Distinction and their Ambiguities") rethink issues of ethnic identity by problematizing early medieval "Romanness". Maya Maskarinec explores how the eighth-century Italian historian Paul the Deacon and his anonymous reviser did or did not resolve the tension between classical (and Christian) models of Roman imperial exceptionalism and the rather less privileged contemporary station of people(s) called Romans. Philipp von Rummel and Irene Barbiera each make emphatic cases for the abandonment of the Roman-barbarian polarity in the interpretation of early medieval burial archaeology. Von Rummel's paper is particularly important in its careful formulation of what is, if not an emerging consensus, then at least a now commonly held position: "row-grave cemeteries [...] should no longer be regarded as expressions of ethnic identity, but as evidence of social competition" (391-92). On the other side of the (putative) Roman / barbarian divide, Roland Steinacher considers the potential political significance of the title "king of the Vandals and Alans" through its various attestations in fifth and sixth-century sources. His conclusion is judicious: rex Vandalorum et Alanorum was one way that the Hasding dynasty could define their kingship in Africa - and one calculated to placate the stalwarts in Geiseric's warband - but only one among many, coexisting with emphatically imperial models of rule.

The volume ends with two sweeping surveys: one of ethnography in Merovingian Francia (Gerald Krutzler), the other of epigraphy across early medieval Europe (Flavia De Rubeis). Krutzler sets out various relationships between myths of origins and stories of the deep historical past (on the one hand) and contemporary Frankish political relationships (on the other). De Rubeis, for her part, argues for the absence of clear "ethno-cultural" zones in the epigraphic material. The level of variety and detail in each is almost overwhelming; then again, this seems to be part of the point of their contributions (see esp. 536 for Merovingian ethnography as an "überaus komplexes und uneinheitliches Konglomerat"). These are fascinating pieces, but it is not entirely clear how they fit into the overarching theme of the volume.

As is often the case in multi-author volumes, interesting tensions are on show. Differing views are set out on (for example) the persuasiveness of ethnic interpretations of material culture (compare Clay, 180-85 to Von Rummel and Barbiera). Nevertheless, the papers in the volume are unusually uniform in their stated approaches to issues of collective identity (to the point that their opening footnotes are almost interchangeable). A position taken throughout the volume (by and large) is the repudiation of a direct equation of the ethnic discourses of early medieval texts with the form which collective identities took in their societies and polities. Prudent aversion to such a straightforward - and maximalist - reading of these texts is signaled by frequent mentions of authors creating and drawing upon "repertoires", "resources" and "reservoirs". The title of Part I sends a clear signal: these texts are not unmediated traces of contemporary identities, but rather "scripts" for their formation.

Still, as any Hollywood screenwriter could tell you, however good your script, you need to get it into the right hands. What is sometimes less clear from these papers is whether these "scripts for identity" made it into production, or remained in the early medieval equivalent of "development hell". If these texts are to be seen as active participants in the formation of ethnic (and other) collective identities - and not merely distant reflections of something going on elsewhere in society - closer attention to audience and impact (insofar as they can be reconstructed) remains a key desideratum.

There is much still to be said about Christian and barbarian identities in the early medieval West. Post-Roman Transitions gathers together a set of thought-provoking papers on this important set of issues. Like previous Viennese volumes, the "pilot studies" (6) of this book will surely help to set the course for the next stages of these debates.