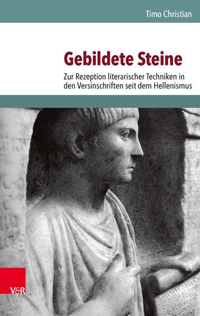 Literary analysis of verse inscriptions has been a desideratum for a while: although the list of scholarly publications on Hellenistic epigrams is long and rapidly growing, studies have been more concerned with inscriptional forms and motifs in literary epigrams than with actual epigraphic verses. Timo Christian's book goes some way to fill this gap, and his broad approach to the subject and, especially, his meticulous reading of numerous inscriptions are a welcome contribution to the field.

In the Introduction, Christian situates his inquiry in an area in which interest in literary epigrams still dominates even in studies concerned with the mutual influence of literary and inscriptional epigrams. He acknowledges the difficulty of drawing the line between literary and inscriptional epigrams, since an epitaph preserved in a manuscript tradition may have been copied from a grave stele, whereas some epigrams composed for circulation in a book-form ended up recorded on stones. Christian refuses to get caught up in this issue, arguing that, while there may be no criteria that would allow one to determine with certainty whether a particular epigram is literary or inscriptional, the modes of transmission of thousands of epigrams do furnish two distinct groups of texts, those preserved in books and on stones, the developments of which can be compared. Christian's attempt to look past the trees at the forest is to be applauded.

Since the book is concerned with changes and innovations in inscriptional verses resulting from developments in literary poetry (or at times the other way around), Christian introduces and explains terminology he uses throughout to qualify the process of reception, namely of borrowing (Übernahme) and of adaptation (Aneignung). In the former, literary innovations appear in more-or-less unchanged form in inscriptions, whereas in the latter, there is an adjustment to specific requirements of verse inscriptions, a process of particular interest for understanding literary development of inscriptional epigrams.

The main body of the book consists of five chapters, three of which focus on the "speaker" of an inscription, that is on the format of discourse, and two on certain themes or motifs, and thus concerned more with the content of the discourse. The subject of the first and longest chapter is the speech of the monument. Here, the author provides an historical overview of the I-form of speech in Greek inscriptions and discusses theories concerning its origin. He argues that early Greek inscriptions are either explicitly spoken by the monument or can be perceived as neutral transmitters of a message that is meant to evoke a face-to-face communication, a situation for which he draws interesting parallels in early letters. In the second half of the sixth century, however, other subjects emerge as speakers of verse inscriptions, such as the deceased or the so-called anonymous mourner. The articulation of inscriptional discourse becomes thus more complicated, a tendency that culminates in a set of late archaic epigrams in which the act of reading an inscription by a passer-by becomes reflected upon in the verse. In the Hellenistic period, speaking objects become a poetic theme, to which inscriptions react by turning to literary exploration of the circumstances in which an object can speak. Various artistic possibilities afforded by the notion of the speaking monument include reflections on its reliability as well as related themes of the paradox or miracle of a speaking stone.

Chapter II continues the theme of the speech of an object, but approaches it from a different angle: it considers not the subject of the speech, but the means by which it gains voice. Christian analyses two mythical paradigms of endowing a speechless object with a voice, those of Echo and Niobe, and concludes that mythological discourse related to Echo is attested mostly in literary epigrams. On the other hand, the myth of Niobe and motif of lamenting stone, both derived from literary poetry, are adapted in inscriptional verses. Moving to a higher level of generalization, he then discusses the literary device of "pathetic fallacy," or the description of objects as having emotions, in inscriptional verses in comparison to literary epigrams.

In Chapter III attention is turned to verse inscriptions that are phrased as spoken by the dead. Christian draws an insightful contrast between pre-Hellenistic verse inscriptions and later ones: in earlier epigrams, the act of speaking by the deceased is direct and unmediated, and even when it enters a dialogue, the change of speaker is unannounced. What the dead speak of is firmly bound to those they left behind - the spouse, parents, and children. From the Hellenistic period on, the compositions of speech acts become elaborate in terms of their dramatic setup. The deceased speak also more of themselves, reflecting upon their ability or inability to speak or contrasting their voice in life and in death. Here, epitaphs for young children that make them speak although they died before learning to speak, as well as epigrams commemorating actors, especially those of pantomimes, afford instances of particularly fascinating literary analysis.

Chapter IV investigates the motif of lifelikeness (Lebensechtheit), an innovation in literary ecphrastic epigrams that has pre-Hellenistic inscriptional forerunners. Christian discusses differences in literary strategies between epigrams depicting gods and human beings, and then zooms in on the literary device of exploring the properties of a monument as fitting the commemorated person. He allots a subsection to a peculiar theme of aging and rejuvenation that occurs in late antique verse inscriptions commemorating various reconstruction projects, and ends the chapter with the topos of the similarity of object to person. To emphasize the extremes marking pre- and post-Hellenistic treatments, he cites two epigrams. In one an archaic cup says: "I am a cup of Gorginios (?), beautiful [sc. possession] of a beautiful" and the other is a late-antique epigram in which the purity of a man is compared to the bathhouse he builds: "Like Illos, protector from evil, is this beautiful bathhouse: protector from evil, it is pure, built by a pure [sc. man]" (298). One can hardly think of a better illustration of a theme before and after Hellenism!

In the last chapter Christian concentrates on two motifs prominent in Hellenistic poetry, namely the description of the locus amoenus and of water-springs. Their importance is not in their frequent occurrence, but in the possibilities they afford for reflection on poetic discourse itself, which he traces through both literary and inscriptional epigrams.

In the Conclusion, Christian sums up his findings and formulates two tendencies in the development of verse inscriptions from the Hellenistic period on. On the one hand, there is an increasing recourse to literary epigrammatic tradition and Hellenistic literature in general. Although it can consist of a simple borrowing of a motif, more often it manifests itself in the development of themes that are treated in literary epigrams as traditional inscriptional topoi, as well as in greater emphasis on the literary and artistic property of poetic diction and composition. On the other hand, the process of the increasing "literarisation" of inscriptional verses is marked by their simultaneous delimitation from literary poetry through the process of adjustment and adaptation. Just as literary epigrams developed and modified the inscriptional tradition for their own artistic purposes, verse inscriptions appropriated elements of the literary tradition by adjusting them to fit the circumstances of "real" inscriptions. Christian signs off with a nice reminder that the functional and occasional character of verse inscriptions should not be disregarded. Only when the function of an inscription is taken into account, can one appreciate and evaluate the creative development of literary techniques in inscriptional verses as well as their contribution to the evolution of epigrammatic poetry.