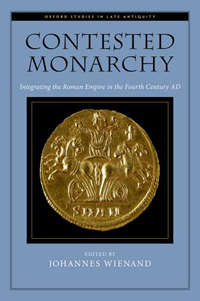 It is a pleasure to be asked to review a book for which one has such unreserved praise. Contested Monarchy is a welcome consideration, in 20 articles and in 451 pages of main text, of the highly distinctive forms taken by the Roman monarchy during period roughly bounded by the accession of Diocletian and the death of Theodosius, that is 284-395 AD. The book is the fruit of a conference of the same name held in Konstanz in Germany in July 2009. It contributors are an assemblage of some of the most significant names in the field from Germany, Britain, and the United States.

Contested Monarchy's guiding premise is that the late Roman monarchy was so conceived of by contemporaries that challenge to imperial authority was an almost constant problem and that imperial regimes therefore had to devote enormous energy and resources to communicating their authority to their subjects in order to maintain their loyalty. This is generally agreed as an axiom of late Roman imperial government but it is often mentioned in the secondary literature without much recourse to evidence. Contested Monarchy provides that evidence, and does so in spades.

As Wienand, the book's editor and the contributor of an introductory, internal, and concluding chapter, points out in his introduction (viii), despite the fact that this period constitutes a historically distinctive era of the Empire, and in particular of the way in which the imperial government interacted with its subjects on both elite and popular levels, it is all too rarely treated as whole by historians, who have tended to concentrate on studies of individual reigns and dynasties. Contested Monarchy is therefore valuable as a consideration of this period not structured by the usual temporal boundaries. [1] It also pleasing that Constantine, although he features heavily throughout the text, has nevertheless not been allowed to dominate, as often happens in studies of this period.

The book is divided into three main sections: 'Administering the Empire', 'Performing the Monarchy', and 'Balancing Religious Change'. Unlike many conference proceedings, which can often end up forming rather diffuse volumes, Contested Monarchy retains an impressive thematic unity throughout. The papers are a mixture of studies on individual emperors and dynasties and of thematic papers that range across the span of Contested Monarchy's stated chronology. With only limited space, all that will be possible here is a summary of the tenor of each of the three main sections.

The first section, 'Administering the Empire', contains articles on emergence of a new, trans-imperial senate (Weisweiler), on the reorganisation of senatorial and equestrian ranks of precedence and their so-called 'inflation' (Dillon), on the flurry of legislation from the years 364-5 and its purpose (Schmidt-Hofner), on the relationship of generals (Lee) and of Gaul (Szidat) to successive emperors, and on the emergence and consequences of elite regional hierarchies (Kulikowski). These papers constitute an important socio-political history of the relationship between emperors on the one hand and between senators, the imperial administration, the army, and the localities on the other. These relationships have been examined elsewhere, but the value of the consideration here is that it both extends the view of them out into the full span of the fourth century and, importantly, considers them as much from the point of view of the subordinates as it does from the point of view of the emperors. It provides a valuable complement to more traditional, top-down narratives, and to previous works that engage with the world of the elites. [2]

The second section, 'Performing the Monarchy', contains articles on Rome's position as a display ground for victories in civil wars (Humphries), on civil war triumphs more generally (Wienand), on the treatment of the subordinates of defeated usurpers (Leppin), on the importance of reading together the panegyrics of Pliny and Pacatus in the Panegyrici Latini collection (Kelly), on the re-emergence of a principle of hereditary succession (Börm), and on the reforms to criminal law made by the emperor Constantine (Reitzenstein-Ronning). Here, Contested Monarchy's theme comes into particularly sharp focus, as much of this section is dedicated to the theme of civil war and inter-imperial competition. Together, these chapters constitute a serious contribution to the study of usurpation in the fourth century, a subject which, despite its obvious importance, has been severely neglected in English scholarship until now. [3]

The third section, 'Balancing Religious Change,' contains articles on the emergence of Christian interpretations of imperial power (Drake), on the religious significance of Constantine's conquest of Rome (Bleckmann), on the foundation of Constantinople and the creation by Constantine of a distinctly non-Christian cult to the city's Tyche (Lenski), on the quest for doctrinal unity within the church under Constantius II (Diefenbach), on the seemingly unprecedented emergence of religious violence in the period (Hahn), and on the Altar of Victory controversy (Lizzi Testa). The value of this section, in particular, is to problematize the whole idea of an imperial church by demonstrating that many of the ideas which are often assumed to have been the motivating forces of religious change in the period - in particular on the idea of pan-imperial doctrinal unity and of the opposition of pagan and Christian practice - were, in fact, only in their infancy in the fourth century. Together, these chapters give insight into the emergence of imperially sponsored Christianity and help to highlight how winding the road to a state church really was. These ideas are not new to this volume but Contested Monarchy provides a valuable addition to the debate. [4]

The book ends with a chapter from its editor, Wienand, which discusses victory medallions issued by the emperor Constantius before closing with a brief inquiry into the symbolism and importance of the diadem, thereby bringing him back to the themes he first raised in his introduction and the quotation with which the volume begins: Eine Krone ist nur ein Hut, in den es hineinregnet.

Contested Monarchy's major sin is one of omission, since the book would have greatly benefited from a chapter solely devoted to the question of imperial legitimacy and to what precisely we mean when we talk about the legitimacy of emperors. Work has been done elsewhere on this topic, though a definitive treatment is still waiting to be produced. Wienand's introduction skates the issue, making, as it is apparently obligatory to do in such studies, some reference to Weber's categories of legitimacy but not delving into the issue in any depth. Since one of Contested Monarchy's great virtues is that it has brought into English scholarship some of the questions which have, for some time, been exciting German scholars and since most of the scholarship that one might currently cite on this topic is in German, it is certainly a shame that no such chapter is included, as it would have provided a useful framework through which to view the rest of the book. [5] Whether any such framework could have been advanced to which all of Contested Monarchy's contributors felt ready to give their assent is another question.

Nevertheless, this is ultimately only nitpicking. As I have already said, Contested Monarchy is an enormously valuable volume without a weak link in its chain of articles. It is a must have for any scholar working on late Roman political, social, or religious history and for the library of any university that offers courses on the fourth century. Its depth of inquiry and range of coverage means that it will be of great value to researchers but the articles are all sufficiently accessible that advanced students will be able to gain much from them as well. The articles can be read individually, but the volume repays reading as a whole.

[1] See also further insightful comments on periodisation in Kulikowski's article (135-45), which challenge the divisions of Contested Monarchy's own chronology.

[3] Though see excellent considerations in N. Lenski: Failure of Empire. Valens and the Roman State in the Fourth Century A.D, Berkeley / London 2002, 68-115; M. Humphries: From Usurper to Emperor. The politics of legitimation in the age of Constantine, in: Journal of Late Antiquity 1:1 (2008), 82-100; S. Lunn-Rockliffe: Commemorating the Usurper Magnus Maximus. Ekphrasis, Poetry, and History in Pacatus' Panegyric of Theodosius, in: Journal of Late Antiquity 3:2 (2010), 316-336.