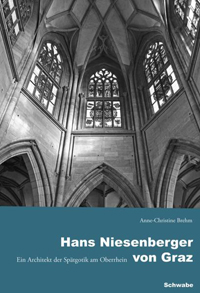 Although medieval architectural practice has been subject of countless of studies, the monograph devoted to a single master remains a rare genre. The contrast with book-length studies on Italian renaissance architects is particularly striking. The want of studies on northern masters can be explained by the paucity of written sources, which makes the reconstruction of their oeuvres troublesome. However, the genre has also long suffered from a lack of interest, possibly because scholars were wary to blunder into the same trap as nineteenth-century predecessors, who regularly made attributions on the basis a few archival finds. Due this neglect, many important architectural designers in Northern Europe have not received serious scholarly attention, and their names and works remain obscure, or only known to a public of specialists. Fortunately, this type of study has received a new impulse, and a number of monographs that examine the oeuvre of a late gothic master, have seen the light in the last few decades (e.g. Burkhard Engelberg in 1999, Nussdorf in 2003, and Chambiges in 2015).[1] Anne Brehm's book based on her PhD-thesis on the Werkmeister Hans Niesenberger very well fits this renewed interest.

Born around 1414 in Graz, Niesenberger, became master of several of the most prominent ecclesiastical building sites of his time: Freiburg Minster, Strasbourg Cathedral, Basel Cathedral, and Milan Cathedral. Brehm treats his life and career in a chronological order, starting with his formative years in his hometown, his enterprise as a stonemason in Ravensburg, followed by his position as master of the works at Freiburg Minster. His contract at Freiburg from 1471, shows that he did not swap his busy workshop for a fulltime job as master of the works: he remained in Ravensburg, and it was agreed that he was to visit the masons' lodge in Freiburg only four times a year. He had good reasons for doing so: his enterprise in Ravensburg had brought him considerable wealth, and tax records show that he belonged to the most affluent burghers of the town.

Niesenberger must have had great organisational skills and during his lifetime he continued to conduct multiple projects simultaneously. He was able to expand his practice in the Upper Rhine, and he is likely to have been the master of the works at Saint Theobald in Thann, Breisach Minster, and the Stadtkirche at Emmendingen. A high point in his career must have been his appointment in the early 1480s as master of the principal masons' lodge in Southern Germany, that of Strasbourg Cathedral. Shortly after, in 1483, he was invited to Milan to lead the work on the crossing tower of the Duomo. His exceptional generous salary, shows that he was received with due respect by the Fabbrica. Again, Niesenberger saw to it, that he could continue his other business; he was granted the unusual liberty to be away from the building site for as long as two months.

The dramatic last years of his career show that Niesenberger clearly overstepped his capabilities as organiser; the combination of such geographically dispersed projects brought him into serious trouble. After the discovery of defective work, he was successively fired in Milan in 1486, and in Freiberg in 1491. Niesenberger tried to save his name by pointing out that the defects had occurred during his absence. A conflict with the Basel master mason Hans Nussdorf shows that he did not get rid of his tarnished reputation that easily. Nussdorf spread the rumour that Niesenberger was discredited by the masons' lodge of Ulm, and that his pupils were not accepted by other masters. However, his employers acquitted him of the accusations, and Niesenberger remained the master of the Basel Cathedral until his death in 1493.

Despite the limited sources on Niesenberger's life and work, Brehm has uncovered a clear image of his practice, due to her meticulous archival research and exhaustive analysis of his buildings. A great deal of the wealth of archival data that is presented, has found its way into the book's appendix, which forms a true treasure trove for further research. When written sources fall short, Brehm uses stylistic and archaeological evidence to distinguish the actual campaigns Niesenberger was involved with. She convincingly argues that certain architectural designs and mouldings (e.g. tracery patterns, pier socles and consoles) can be related to Niesenberger, and credits him for introducing specific forms from Styria (Austria) in the Upper Rhine. Furthermore, Brehm believes that a preference for austerity, and lack of decoration (reduzierte Formensprache) are typical for his œuvre.

Although, Brehm's keen eye and great knowledge of late gothic motifs, is undoubtedly one of the main qualities of her study, her 'Morrelian method' also raises some significant questions. For instance, one would like to know what the limitations of such a method are when considering the fifteenth-century practice in Southern Germany that was characterized by a dynamic exchange of designs and motifs. The masons' lodges were in close contact with each other; masons were common to travel between building sites and also drawings circulated widely. Moreover; Brehm's approach largely leaves out the preferences of the patron. One can imagine that the design of specific details or mouldings was up to the master himself (or his undermaster), however when it comes to magnificentia and richness of decoration, the patron usually had the final say. They could even be quite specific about their taste and point out specific buildings that had to be followed as an example.

Notwithstanding, these methodological considerations, the book is a thorough and scholarly work in a genre that too often has been disregarded. Apart from the wealth of information on Niesenberger, the book provides lengthy and detailed archaeological analyses of the most important ecclesiastical buildings in the Upper Rhine. In addition, it produces amusing and important insights into world of late gothic architects in general. In particular, the discussion of the many court cases that Niesenberger got involved in, brings up interesting issues as conditions of employment, the hiring of cheap labour, and the necessity of maintaining your good reputation among colleagues.