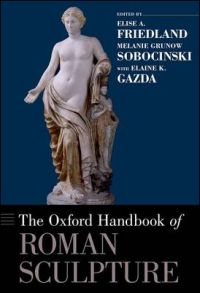 The Oxford Handbooks series has a clearly stated mission: to provide scholars and graduate students with "an authoritative and state-of-the art survey of current thinking and research in a particular subject area." The Oxford Handbook of Roman Sculpture consequently concentrates on current academic modes of thought and avenues of approach rather than on the character, impact, and achievement of Roman sculpture. While this volume will be a niche book consulted by a sliver of specialists rather than read by a broad audience, it presents those experts with a valuable overview of the many advances in the field over the last twenty years and establishes a solid foundation for future exploration.

The author / editors, Elise Friedland, Melanie Grunow Sobocinski, and Elaine Gazda were ambitious about the scope of their book, dividing it into six thematic parts and commissioning 38 authors, in addition to themselves, to write the 41 essays that comprise the volume. The participating authors, from the US and abroad, are at various stages of their careers. All essays are written in or translated into English and each provides bibliography in English and the other languages in which relevant scholarship abounds.

The six themes, in order of presentation, are: 1) Collecting, Conservation, and Display; 2) Production and Distribution; 3) Styles and Genres; 4) Spatial and Social Contexts; 5) Regions and Provinces; and 6) Viewing and Reception. The sequence in which the sections and individual essays are arranged establishes the volume's narrative. The editors note that the Handbook is intentionally not the chronological account of my earlier historical survey (Roman Sculpture, Yale University Press, 1992) but an attempt to "fill the gap between such introductory textbooks (which often do not reveal the critical apparatus to the user) and the highly focused professional literature" (2). To that I say: "Vive la différence!" and I welcome this book, which I will recommend to my own students.

Each part of the book has its own vibe. Beginning with the topic of collecting was an inspiration since "for much of the premodern period, the collecting of ancient sculpture was synonymous with the collecting of art" (13). Engagement with Roman sculpture has expanded as museums spotlight Rome's treasures through "reinstallation", "addressing the audience", and "putting scholarship on display" (59-70). Furthermore, readers expectations are raised that "the internet will make it possible for anyone interested in ancient sculpture to have her own digital cast collection" (86).

Production and Distribution is a more standard but useful treatment of the economic, social, and political role of Roman marble and marble quarries, marble carving techniques and workshops, reuse and recarving, bronzes, terracottas, polychromy, transport and distribution.

Styles and Genres features essays that alternate between traditional art historical analysis and more theoretical interpretations. The efficacy of these approaches varies by the skill of the author but the dichotomy provides an accurate picture of the various methodologies scholars use, serving as a valuable window on the current state of research and writing on Roman sculpture. Nonetheless, topics like style in Roman sculpture, Etruscan connections, Greek and Roman "ideal" sculpture, portraiture, monumental reliefs, archaism, eclecticism, Egyptian-style works, and late-antique sculpture are conventional choices.

Spatial and Social Contexts provides an overview of Roman sculpture in its architectural context, serving as an informative counter balance to the present museum location of most surviving Roman sculpture. Observations on what kind of statues were displayed where, for example in religious settings, domestic milieus, and funerary contexts, are combined with the encouragement researchers are given to use new searchable online ancient inscription databases for a deeper understanding of the combined objectives of Latin epigraphy and Roman sculpture.

Regions and Provinces surveys Roman sculpture in Northern Gaul, Germany, and Britain, Hispaniae and Narbonensis, North Africa, Greece, Asia Minor, Egypt, and the Near East. Through these, the case is forcefully made that the "canon" of Roman sculpture can and should be expanded to include a greater number of examples from all corners of the empire.

Viewing and Reception comprises some of the most diverse and interesting essays on such subjects as aesthetics and Latin literary reception, reception theory, ancient analogs of museums, images of statues in other media, human interactions with statues, and iconoclasm. These highlight literary frameworks for evaluating Roman sculpture, viewing and reception, Roman collecting practices, Roman images of and interaction with Roman statues, deliberate damage to Roman statues, and the increasing interest in memory studies.

In keeping with their charge, the editors of the Handbook selected the topics and authors, crafted the structure and positioned the essays and supporting documentation, all of which shaped the final project. In their introduction, Friedland and Sobocinski indicate that the Handbook is about scholarship and rightly point out that traditional analytic methods have been expanded to include a host of new approaches. Some of these respond to the increasing pace of excavation, which has significantly enlarged the corpus of works of Roman sculpture and provides further information about their original settings. Others arise from intensified theoretical, scientific, and technical analysis and a broader understanding of the breadth of the Roman Empire and the interaction between center and periphery. The editors' aim is to adumbrate those new methodologies in a way that will provide colleagues and graduate students with a pathway to doing what the authors define as au courant work and to selecting a book or dissertation topic. This is a worthy aim but one that doesn't take into account that what is current is no longer current for long and that the publishing world has changed so dramatically that it is becoming increasingly difficult to find publishers for books that will only be purchased by a small number of scholars and students and by an increasingly smaller number of libraries.

Above all, what is missing in this new anthology is Roman sculpture. An initiative to make Roman sculpture even more present needs to be embraced by an increasingly motivated cadre of young scholars and teachers. Students are harder than ever to attract to the humanities and, as a student, I wouldn't be enticed into this field by this book. This is an image driven world and, in order to make this subject relevant, even for graduate students, the power of images needs to be unleashed to showcase the wide range of surviving Roman sculpture. Why not use the ten color photographs in the book to feature what the authors think are the ten most fascinating extant works of Roman sculpture? These would immediately make clear why Roman sculpture was and remains captivating and commanding. Instead this book is illustrated with a small number of mostly uninspiring and inferior quality black-and-white images (among the least good I've seen in any recent publication) on tissue-thin paper. Even in a book about scholarship, the works of Roman sculpture should be allowed to exhibit their manmade potential.

The Oxford Handbook of Roman Sculpture is an important and beneficial resource and we should celebrate its arrival. Nonetheless, it seems to me that our role as interpreters of Roman sculpture is not to speak for the Romans but to help them speak for themselves as they celebrate military victories, take part in religious and civic processions, show off their latest hairstyles, and grieve deeply for a lost child. And we should remember that Roman sculpture is not about us but about them.