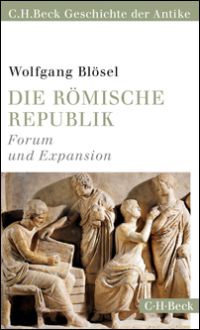 Wolfgang Blösel has effectively tackled the daunting task of writing a compact history of Republican Rome in just under three hundred pages. His volume belongs in a series recently launched at Beck that sets out to provide a complement of concise and accessible overviews of different phases of ancient history. Like the other titles in the collection (such as Elke Stein-Hölkeskamp's book on archaic Greece and Rene Pfeilschifter's on late Antiquity), the book has the ambition of being reasonably comprehensive, while framing the topic through a distinctive thematic emphasis. Blösel has chosen to focus on Forum und Expansion, and the discussion is predominantly slanted towards political and military developments - domi militiaeque. Much of what he says, therefore, may be read as a sustained reflection on the ways in which violence is deployed, contained, defined in the Republican period, and Blösel's view of the history of the nobilitas (argued more fully elsewhere) is one of gradual disengagement from the demands of military life and correspondingly greater involvement with different domains of practice and knowledge, notably law and rhetoric.

As is the case in other recent discussions of the Republican period, most notably Harriet Flower's Roman Republics, the age of Sulla stands out as a moment of traumatic and creative change: the opening scene of Blösel's account is the massacre of the Samnite prisoners in the temple of Bellona after the Colline Gate battle. That is not the only noteworthy choice on periodisation and on the overall framing of the account in this discussion, which is otherwise mostly chronological in focus. The account of the early Republic is preceded by a thoughtful discussion of the problems presented by the foundation of the city, in which Blösel shows he has no time for Andrea Carandini's reading of the evidence from the Palatine. A specific and productive link is established throughout chapter 3 between the formation of the nobility and the expansion in Italy, and on the impact that the process had to the emergence of a long-term phase of political consensus. The full implications of this process, whether in the economic sphere or in the urban landscape of the city, do not receive full consideration, since the focus of the subsequent discussion is on the military front, and indeed on the clash with Carthage. The emphasis on military developments continues in the treatment of the transmarine wars, which Blösel uses as a lead into the discussion of the economic and social impact of Roman imperialism (145-149). The study of the increasing degree of differentiation and complexity in the Roman elite stems from that analysis, and it is at this point that Blösel introduces the theme of the military 'dequalification' of the Roman nobility in this period and singles it out as a major avenue of historical explanation (152-154). The focus of the following chapter, from the Gracchi to Sulla, is far less surprising. The chapter on the period from the death of Sulla to the Second Triumvirate is concentrated mainly on Pompey and Caesar. Cicero receives comparatively far less attention, not just for his impact on the Roman political discourse, but because of the role that he played as an individual; the fundamental gist of Blösel's discussion is that the weight of military factors and mobilisation is predominant in this period. Cicero's relevance is vindicated - so to speak - at the end of the discussion, when his death is singled out as the moment that marked the demise of any prospect of senatorial hegemony, and the end of the Republican period. As he does at the outset of the volume, though, Blösel provides some discussion of what happened beyond that terminus, and covers the triumviral period and the very beginning of the Augustan period (albeit without going into a discussion of the powers of the princeps). Consistently with the brief that he set himself, Blösel emphasises the significance of the Augustan veteran settlements as the moment that effectively brought the late Republican civil wars to completion.

This is neither a student textbook nor a popularising volume. It is a solid account of a complex historical period, written by a knowledgeable and research-active scholar, presented in broadly accessible terms, and pitched at a fairly high intellectual level. If one takes the recent instalments of the Edinburgh History of Ancient Rome series as a term of comparison, there is clearly much less here in the way of scholarly and erudite analysis - and that is not just a function of the fact that in the EUP project the history of the Republic is encompassed across four volumes, and space constraints are therefore considerably lighter. At the same time, the pitch is set at a much higher level than the typical popularising book: Blösel takes his readers through complex conceptual issues (e.g. the fine discussion of Stadtgründung and Stadtwerdung on p. 19-20, or the handling of the weight of oral tradition in our understanding of the struggle of the orders on p. 37) and does not shy away from lengthy, and in places detailed, overviews of Rome's military endeavours. I gather that an Italian translation of this book is currently in preparation, and I am not surprised to hear that: it is fair guess that it will find a keen audience in that language too. My impression (which is that of a practising academic, not of a member of the publishing industry) is that the English-speaking market would struggle to accommodate a treatment of a major aspect of Ancient History that tries to cover a middle ground between fully-fledged academic discussion and mere popularisation: this is largely a function of the place that Classics and Ancient History have in the school curriculum. The recent success of Mary Beard's SPQR. A History of Ancient Rome (Profile Books, 2015) is the exception that proves the rule: that book is a personal assessment of Roman history as a whole, rather than of a specific period or problem, written by a leading scholar who is both a public intellectual with a strong media profile and a non-fiction writer of exceptional ability.

The usefulness of Blösel's volume as a study resource is hindered by the meagre apparatus of references to the primary evidence: just over sixty notes, collected at the end of the volume. Tom Holland's Rubicon, which certainly cannot make the claim to scholarly rigour and insight that Blösel's book can, has more than five times as many. There is no tension between the need to provide an accessible account and the desirability of backing it up with a suitable set of references to the sources. One wonders whether this gap may be addressed in future editions of the work.

On the other hand, the working bibliography that rounds off the volume is one of its distinctive and most valuable features. It has, and understandably so, a bias towards German-speaking scholarship, which turns it into a useful working tool for the readers who may be interested in getting a synthetic overview of the more influential (or indeed controversial) work that has been produced in that language over the last couple of decades or so. The index nominum is excellent, and readers will do well not to overlook the map in the inside cover of the volume, which gives a valuable overview of the construction of the Roman alliance system across Italy between 338 and 91. Those who are looking for a concise and authoritative account of the political and military history of the Roman Republic, carefully steeped in serious engagement with the main trends of current scholarship, will find in Blösel's book an honest and judicious guide.