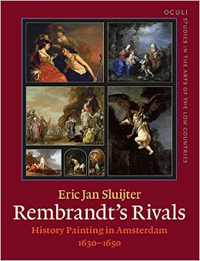 Sometimes major sponsored research projects do bring truly serious results. This book is the first volume - and arguably the most important one - to emerge from recent Dutch research (NWO) sponsorship at the University of Amsterdam to assess the sudden rise in seventeenth-century Amsterdam of history painting alongside the career of Rembrandt. Some of this supported work has already produced important contributions, including a number of Master's theses. One distinguished doctoral dissertation by Erna Kok (2013) studies the career strategies of Flinck, Bol, Backer, and Sandrart, all of whom play major roles in this volume. Another book by Elmer Kolfin will appear next year on the important cycle of the Batavians in the Amsterdam Town Hall (including the presence of a Flemish outsider, Jacob Jordaens). Kolfin also partnered with Jaap van der Veen about Amsterdam print publishers; their exhibition was held at the Rembrandthuis in 2011. Frauke Laarman is preparing a study of biblical subjects and their consumers. And Marten Jan Bok and Harm Nijboer developed an online database, Ecartico, of artists and their cities, some of whose graphics are displayed in this volume. Taken together, these projects mark a fitting complement to the generation-long investigations by the Rembrandt Research Project, finally wound up at Amsterdam University by the team headed by Ernst van de Wetering (the concluding Volume VI of the Corpus appeared in 2014).

But the most public and significant result of this project is the book under review, a magisterial synthesis by a senior Dutch scholar who has been working on Dutch history paintings since his 1986 Leiden dissertation on seventeenth-century mythologies. Eric Jan Sluijter now builds on his own compelling volume, Rembrandt and the Female Nude (2006), and among other achievements, he offers one of the finest brief analyses of Rembrandt's history painting ambitions during the height of his early successes and how they set a model for either acceptance or resistance by his Amsterdam colleagues (25-70). He elegantly summarizes his assessment of the overall picture of the period in an epilogue (385-399).

What is the significance of such a book? First of all, comprehensiveness - most of the paintings Sluijter deals with are never on view in their respective museums, and the sheer abundance of great Dutch paintings in the Netherlands crowds unfamiliar or lesser painters into storage. To have the fuller range of artists in a given period is as important - perhaps more important - during the prolific seventeenth century in Amsterdam as it is, say, in Weimar Germany between 1919-1933, the topic of a current exhibition in Los Angeles by Stephanie Barron. Sluijter also promises to add to this solid foundation with a follow-up volume, rounding out the Golden Age from midcentury to c. 1690. But this formative moment during the rise of Amsterdam will remain the indispensible starting-point.

The second major contribution of this volume is to situate the responses of all other local painters in relation to the powerful stimulus of Rembrandt. Too often the standard narrative, especially in exhibitions, is confined solely to "Rembrandt and his pupils", as if the point of the exercise was to stress his uniqueness and genius in contrast to a host of lesser epigones and in isolation from all other options, even if some of his closer followers soon would go on to form their own distinctive manners. Instead, here Sluijter reintroduces the crucial figure of Joachim von Sandrart, whose overall neglect until recently has partly been the result of his falling between stools, as a German in Holland (c. 1637-1645) but also in Italy (where he forms a major source for the lives of Dutch émigré artists in Rome), thus as a figure more esteemed for the documentary importance of his publication, Teutsche Academie (Nürnberg, 1675-1679). Seymour Slive's reference work on Dutch painting cites Sandrart only as a historical source, not as a painter. So when Sluijter juxtaposes the cosmopolitan Sandrart with Rembrandt in a single chapter and stresses that his art is "as different as possible", he is restoring a major figure, a true "gentleman-painter", to Amsterdam's art scene. Erna Kok's important 2013 dissertation, cited above, further expands on their contrasting Amsterdam careers.

Moreover, here and in Kok's study, actual Rembrandt pupils are given their due in a wider context than the isolated studies of individual monographs (esp. Albert Blankert on Ferdinand Bol, whom Sluijter relegates to a final chapter on the younger generation and calls "Rembrandt's pupil but an outsider in Amsterdam", 334-45). Govert Flinck assumes his rightful prominence in the city's art world; his elite patronage networks gained him the most prestigious commissions, including both the Kloveniersdoelen and (in the volume to come) the mural canvases of the Amsterdam Town Hall. Jacob Backer, Flinck's friend and the subject of an important recent exhibition at the Rembrandthuis (by Peter van den Brink and Jaap van der Veen, 2008; also see Kok), emerges as an important peer of Rembrandt in age and arrival in Amsterdam (1633). He, too, secured important large-scale commissions for public places, in contrast to Rembrandt, and also painted pastoral and mythic subjects. Sandrart, Flinck, Backer, and eventually Bol would forge elite patronage networks that assured them of prominent commissions rather than dependence on an open market for paintings.

It is also easy in the "Rembrandt and his pupils" model to forget that Bartholomeus Breenbergh returned to the city from Rome in 1630, but his role emerges here in the same chapter as Flinck's and Backer's (127-148) along with some unresolved questions about who collected Breenbergh's works. Such an approach also prevents teleology, especially for an older artist (1591-1655) like Claes Cornelisz Moyaert (150-173), previously confined to awkward anachronistic Limbo as a "pre-Rembrandtist". He is grouped with other Amsterdam natives, Adriaen van Nieulandt, Isaac Isaacz and the talented Salomon Koninck, who was more truly impressed by Rembrandt's manner than most artists. Other Rembrandt-influenced painters, Gerbrand van den Eeckhout and Jan Victors, contemporaries of Bol, are distinguished from true pupils because of their distinctive painting techniques. Jan Lievens (379-384), who began his career with Rembrandt in Leiden, only reappears late in Amsterdam after ambitious work for international courts and influence from van Dyck in Antwerp, so here he merely rounds out the volume.

A short review like this one cannot do justice to the many insights including overviews of subjects and prices, and revisions to our picture of Amsterdam's history painting by Eric Jan Sluijter. This volume, handsomely produced in Amsterdam by Benjamins will long remain a standard reference work, but it is equally valuable for its fresh insights to individual artists against their general civic background.