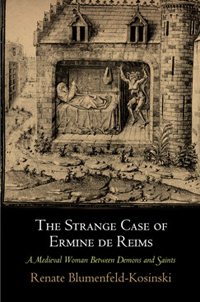 This is an account of the tragic case of an elderly widow bedeviled by saintly and demonic visions in the last year of her life. Or is it? Is it an account of a woman victimized by an ambitious confessor who pours demons and saints from his own imagination into his accounts of their conversations in the last months of her life? How much of this actually happened and how much did either Ermine, or more likely her confessor, Jean le Graveur, invent such incidents in the interests of getting attention or establishing the fame of a potential saint?

The account, of course, is real. Written by Jean le Graveur, her self-identified confessor, copied into manuscripts containing the writings of the great late medieval Churchman and thinker, Jean de Gerson, the existence of the text about Ermine is not at issue. Nor is the examination of the incident by Gerson. The question is how to read Jean le Graveur and his insistence that the disturbing "adventures" attributed to Ermine's confessions should be reported "up the chain of command." While in a general context, the existence of such a woman in such an account by such a cleric fits into trends of the time, what is the evidence that this particular woman was a sufferer from these particular demons and visions? And do we have any independent witness to her or her visions?

The medieval author of the account, Jean le Graveur, tells us that he writes Ermine's story to save souls, but he appears to also want the publicity for himself and his monastic community. So we must continuously ask how much is his invention and how much hers, how much is it predicated on his suggestions about current politico-ecclesiastical affairs, how much does his intervention in her desperate situation create her need to experience or recount these events? In forbidding her to return to her village, in isolating her from any family or friends, in refusing to allow her to confess to her parish priest, but only to himself, in sitting on the side of her bed to record her accounts of what could be saintly visions or demonic invasions, in making her wholly dependent on him for food, shelter, and comfort, does Jean induce Ermine's production of these stories? Certainly he oversteps the boundaries of priestly propriety, committing transgressions in her regard that should have required his own penitence and reintegration into the church by his superiors.

There are inconsistencies in the account. One gets the impression of a woman so miserable that she is confined to her room overlooking the monastic cloister, yet who died of plague because she had gone out to nurse the sick. How dependent is she in fact, if we are to believe she is in her forties as appears to be known? Blumenfeld-Kosinski treats the situation as one of either possession by demons or inspiration by saints, but does it necessarily have to be one or the other? Are there not other variations that come to mind to those of us who have had to deal with what we call today dementia, which without imposing twenty-first century medical categorization still suggest a case in which a confused elderly woman was being manipulated into these visions by the excessively suggestive interventions of this cleric?

By treating it as a "case" as opposed to a story, "the strange tale of Ermine", Blumenfeld-Kosinski appears to come down on the side of historical record rather than that of invention. This is to fall, perhaps, into an almost classic medievalist tendency to assign "truth value" to whatever accounts come out of the mouths of medieval witnesses. This "tendency" has been to treat such authors as if they were too innocent, naive, or simple to be able to have invented such tales "out of whole cloth" or for some sort of personal benefit. Much of the medieval narrative has been based on such assumptions about medieval authors and much of our job as teachers is to get this across to our students - a good reason for thinking about using this book in the classroom.

All this is not to say that Blumenfeld-Kosinski has not done her job well or told an enticing story. She has looked far and wide for corroborating evidence for Ermine. She has examined the account in comparison to other such accounts written down by male scribes for female visionaries, if that is what Ermine was. She has described local and international events in detail. She describes the post-1348 economic devastation that caused so much disruption in country life and so much migration to towns, particularly perhaps by elderly women. To what extent were such visions inspired by urban preachers of hell and damnation, or by religious drama full of costumed saints and devils and hell's mouth? To what extent was the expressed fear that she would fall under censure if not protected by such a cleric the result of a downturn in the textile industry that meant women were no longer welcomed into urban settings as skilled spinsters? Is she a beguine in all but name?

Could we assign it as a text about women, religion, war, plague and old age at the cusp between sainthood and demonization? Blumenfeld-Kosinski provides analysis in four chapters on (1) the world in which Ermine lived, (2) her relationship to her confessor, (3) her piety and devotional practices and (4) her demons. This commentary is an interesting introduction to thirty pages of representative excerpts from the account of this "strange case" translated by Blumenfeld-Kosinski. But can we treat the telling of this "strange case" of Ermine of Reims in 1395-1396 as a "micro-history?" Or is it instead the "contextualization" of an instance of clerical ambition clothed in the fictitious "construction" of a holy woman written by her soi-disant "confessor?" Blumenfeld-Kosinski's book allows us to ponder all those things. And it also provides enough alternative views to leave us guessing.