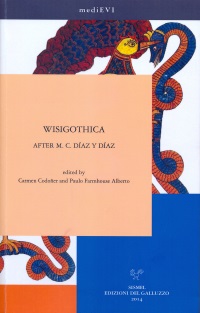 This volume is a collection of articles written in honor of Manuel Cecilio Díaz y Díaz, the great Spanish Latinist. However, as Carmen Codoñer and Paulo Farmhouse Alberto - the volume editor's - warn the readers, this is not the usual Festschrift. Instead, the work's main objective is to be "a volume of studies representing the state of research on the texts and culture of Visigothic and early Medieaval Spain, the role of Spain as receiver of the late antique tradition and as transmitter of this legacy to later generations, and the reception of the texts in the Middle Ages and Renaissance" (VIII-IX). The large scope of this volume - twenty-five contributions in 763 pages - is only fitting for the profuse and diverse work from Díaz y Díaz himself.

The volume is divided in three sections: "Visigothic and Mozarabic textual production", "Circulation of texts" and "Textual and cultural reception". The articles are complemented by a list of works from Díaz y Díaz (sorted by publication year) and two indexes - one of cited manuscripts and a general one. The volume does not have a general bibliography (only one author presents one at the end of his contribution) - otherwise, the reader may consult the abundant footnotes in each contribution.

The contributors compose a diverse group: they are mostly Latinists, philologists and historians, working in six different European countries (Spain, Portugal, France, Italy, UK and Switzerland). The brief Preface was published in four languages, but each contribution was published in only one (English, Italian, Spanish, French or Portuguese). The reader will find an abstract in English at the end of every contribution. Most of the contributions deal with the so-called "manuscript studies", with a strong emphasis in philological questions and problems of manuscript's transmission.

The contributions can be described as bibliographical panoramas or specific theses. The first category consists of contributions that aim to stablish the state-of-the art regarding a specific theme or field. These are not exclusively literature reviews, as the authors exhibit their expertise evaluating the latest research with a profound knowledge of the sources; the second category also mentions and discuss the latest research, but their primary objective is to present an original hypothesis formulated by the author. Given the book size and scope, we will not resort to a mere listing of its table of contents (which may be consulted in this link [http://www.sismel.it/tidetails.asp?hdntiid=1347]. Instead, even though this does not exhaust the book's range, we may now turn to some examples of each type of contribution to see how diverse they are and how relate each other with the book's main themes.

The article by Isabel Velázquez in the first section - "Epigrafía en la Hispania de época visigoda: nuevas perspectivas, revisiones críticas y estudios" - is one of the best examples of the bibliographical panoramas mentioned above. Velázquez presents a wide review of the last developments regarding epigraphy in the Visigothic period, but its value is directly related to its textual organization: the author frames the recent developments within the field's most central debates - mainly, but not only, about the disputed "Visigothic churches" (310-313). This kind of textual organization is based on a methodological critique of some unchallenged presuppositions within these debates - primarily of the ways in which the chronology of epigraphical record is stablished and used (322-323).

Also in the volume's first section, I want to highlight Catarina Gaspar and M. Manuela Alves Dias' contribution - "A população de Mérida e de Mértola nas fontes epigráficas". Among the contributions that are specific thesis, this is one of the most focused. The authors set out to compare the funerary epigraphy from Mértola and Merida during the Late Antiquity, showing a clear difference of status regarding the ecclesiastical hierarchy represented in the epigraphical record in those cities: in Merida the social foreground was occupied by bishops, while in Mértola the evidence highlights presbyters and "a non-aristocratic/senatorial elite" (336). The authors emphasize the limits of their evidence, but their contribution also demonstrates its many possibilities. The strength of this contribution is to actually shed light in both Merida and Mértola's society at the same time it presents to the reader a panorama of the funerary epigraphy in those two cities.

Carmen Cardelle Hartman's "Uso y recepción de las Etymologiae de Isidoro" is a fine sample for the contributions in the volume's second session. Hartman sets out to evaluate the scholarship on the reception of Isidore Etymologies' from the eighth to eleventh century. Her presentation and analysis is strikingly systematic, sorting the scholarship on the work's reception in types determined by the use made of the manuscripts: "extracts and fragments", "epitomes and combination", "text breakdown", "uses as repository" among others. To each type of use Hartman gives us an overall evaluation of the manuscripts in question and the scholarship (old and new) that dealt with them. The contribution ends with a discussion about the uses of the Etymologies in teaching contexts.

The third session is the smallest one, with only three contributions. I will only mention here Roger Collins' superbly written "Ambrosio de Morales, Bishop Pelayo of Oviedo and the lost manuscripts of Visigothic Spain". In it Collins is able to interwove the knowledge about the Visigothic manuscripts in its four different temporal dimensions: the contemporary one (late 20th and early 21th century), Ambrosio de Morales' discoveries (16th century), Pelayo's work (12th century) and, in some moments, even the production of the manuscripts used by Pelayo (8th and 9th century). In this way, Ambrosio de Morales' discoveries function as the main temporal axis, being the main source to reconstruct Pelayo's work and the other Visigothic texts which he may have knew. Relating all these temporal dimensions, Collins is able to uncover both the importance as well the several uses and abuses of the Visigothic manuscripts for each epoch. Most important, although, is the background theme of how the contemporary actions in each epoch had a determinant action both in the preservation as well in the destruction of the historical evidence.

Overall, this volume is a valuable work. The volume's internal diversity is more a strengthen than a weakness, as it appeals to a wider audience without compromising its depth. In one hand, the work must be praised for its success in its declared primary objective - to be "a volume of studies representing the state of research" in its chosen fields. In the other hand, as a volume in honor of Díaz y Díaz - even if not the usual Festschrift - the book could have been more organic.

Díaz y Díaz's work is mainly a (thematic) starting point for most contributions - Isidore being the most prominent. According to the editors, "the contributors have all been his [Díaz y Díaz] pupils - directly or indirectly -, or they are simply philologists who follow his way of conceiving philology" (IX). This statement may be accurate, but it is not sufficiently explicit throughout the volume. Many contributions do not present any direct engagement with Díaz y Díaz propositions or thesis - even though his works are ubiquitous in the footnotes. Another absence that draws attention is the lack of any biographical contribution or note about Díaz y Díaz (the small Preface only slightly hints in that direction), even though some contributors offers precious glimpses of theirs relationships with the maestro in opening remarks and footnotes.

These elements may offer some explanation of why there is no ongoing debate between the contributions - they all function as stand-alone works, even if their themes overlap. The three section headings have some internal coherence, but the items in each could be mixed up in other ways. The triad production-circulation-reception is an example of a strict division that fortunately is not present in most contributions. Instead, the (more interesting) dynamics of production to circulation and reception are present in several of them.

Wisigothica is an important contribution not only to the field of manuscript studies, but also to its popularization among other scholars. The wide range covered by the volume's contributions guarantees that it will be of interest to a vast audience - both to the specialists as well to the ones interested in the riches and rigorous panoramas and theses. This contribution to the popularization of the field(s) may be the most important tribute to Díaz y Díaz.