E. M. Rose: The Murder of William of Norwich 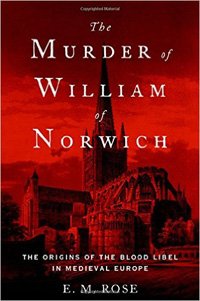 Historians will be familiar with the subject of E. M. Rose's book - the blood libel that was created and spread to justify attacks on Jews across medieval Europe; indeed, the libel survived into modern times in some countries. Those less versed in history sometimes mistake anti-Semitism for an invention of Nazi Germany. The latter group will find in this book a clear account of the medieval persecution of the Jews: the former group will discover a nuanced retelling that may challenge blanket assumptions about the motivations behind the various instances of the blood libel in Norwich, Gloucester, Blois, Bury-St-Edmunds, and Paris, each of which forms a chapter in the book. In all cases, Jews were blamed for the death of young Christians, but the immediate effects of the libel were not in all cases the same, or on the same scale.

Rose's book traces the historical context in which the blood libel originated, considering the twelfth-century reform of the church, the status of Jews in England, and the Second Crusade, with its social and economic effects on English knights, but also reconsiders the circumstances surrounding William of Norwich's death by focusing on the protagonists of the story and the man who first set it down, Thomas of Monmouth. The author deals with a sensational subject in a sensitive and balanced manner; Rose notes that the 'principal actors are people of some substance, some education, and conventional piety', adding that 'none of these men and women appear to have been uncommonly foolish, easily duped, or especially sinister' (7). Such salutary comments do not excuse those involved in the creation of the blood libel, but rather facilitate a reading of the history Rose describes that sees clearly how ordinary, respectable people can become involved in a huge evil.

Rose demonstrates that the attacks on the Norwich Jews were financially motivated: a Norwich knight had murdered a Jewish banker to whom he was in debt, and won acquittal on the grounds that he was acting in revenge for the banker's killing of William. However, Rose demonstrates too that, though the idea of the blood libel spread quickly, the cult of William of Norwich did not, despite the best endeavours of Brother Thomas and the monks of Norwich who were trying to create a local martyr saint to improve the fortunes of Norwich Cathedral, particularly in its rivalry with neighbouring Bury-St-Edmunds.

Bury, by contrast, already had a celebrated saint, and its own blood libel may, Rose argues, have been created partly in response to the closure of the town's mints, in which Jews may have been active, at a time of a serious crisis of liquidity. The subsequent expulsion of the Jews was the occasion for a reassertion of Bury's political independence, as a Liberty, from the crown that had protected Jews.

Similarly in Blois Thibaut of Champagne used the blood libel to assert his own control over a town that was overshadowed by the richer neighbouring lands of his brothers. But Thibaut did not expel the Jews; he ordered their execution by burning, an order that Rose explains is 'a particularly royal gesture' (168): his actions, particularly in the face of opposition from the French king, 'constituted a claim to share in royal power' (168). For the Jews, Thibaut's actions marked an additionally sinister turn in attitudes to the Jews, who were no longer criminals but heretics, not to be tolerated in Christian society, but to be rooted out and killed. As Rose explains, the burnings were carefully staged to create associations with spectacular saints' plays; the Jews created their own associations with the events of Blois, celebrating their dead as religious martyrs by incorporating into the daily Jewish liturgy the Alenu l'Shabeah prayer that the martyrs sang as the flames were lit under them.

In Paris, the blood libel was exploited by the young French king, Phillip II Augustus, who connected the 'martyr' Richard de Pontoise to the cult of the Holy Innocents promoted at the time by Bernard of Clairvaux. As Rose eloquently points out, 'the cult of the innocenti required a dramatic inversion so that the Jewish babies killed by Roman soldiers were regarded in medieval Christian exegesis as Christian boys killed on the command of a Jew' (216). In the context of this cult Phillip was able to use the 'murder' of Richard de Pontoise to justify the expulsion of the Jews from Paris and then seize the extensive landholdings of the expelled Jews to facilitate expansion of the city. His motivation was not just to relieve his own pressing financial problems; he bought support from powerful men with gifts of requisitioned land.

By careful reconstructions of the events of each of these early blood libels, Rose tells a story that allows its reader to see the motivations and actions of important individual protagonists, in the light of the forces at work on them, in their particular historical circumstances. The reader on the way may learn intriguing details of medieval socio-economic history, medieval literature and theatre, medieval exegesis and iconography. The story is no less shocking for being allowed to unfold in this way; rather its genesis becomes painfully easy to follow.