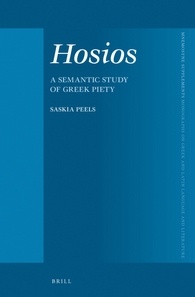 Can a study of the semantics of a single word cast light on ancient Greek religion? Peels' work suggests that it can. After just over 250 pages focused on the range of meanings of a single lexeme, hosios & cognates, she offers us a simple definition: "Hosios is what humans do to please the gods and to give them the timē they deserve, and whatever action or attitude the speaker can convince others that it belongs to that category" (255-6). Given that earlier scholarship has struggled to explain the range of uses of the word hosios, this is an important conclusion, and the process by which it is arrived at is fully explained.

The study is limited to the period down to the end of the fifth century. No strong justification is given for this, and Peels notes: "The line for the inclusion/exclusion of sources was drawn more or less arbitrarily at the death of Socrates in 399 BCE" (24 n. 109). Since Socrates was tried and executed for impiety, it is hard not to see some deliberation in this point. Hosios is a word frequently found in the fourth-century Attic orators: examples are referred to in the discussion, but the focus is inevitably weighted towards dramatic and poetic texts.

The study starts from the notion of lexical competition: "a speaker's choice for a particular lexeme [...] is made after considering (consciously or unconsciously) lexical alternatives and lexemes in the same semantic field" (14). Another important consideration is that "semantic knowledge cannot be separated from other experiences, ideas and concepts associated with the lexeme ('world knowledge') (21). This includes the idea that words are understood within particular 'frames', which are the contexts in which those words are normally used. The result is that "Although a user always interprets a lexeme in a particular usage, in a particular context, all other stored usages of a lexeme are temporally co-activated and so are the frames associated with these other usages" (23).

What this means in simple terms is that the meaning of a word can be determined by examining its distribution (or inventory of usages), the organisation of its semantic network, (what are prototypical or less prototypical cases), and the cultural frame associated with it. Chapter 2 takes this approach to hosios & cognates, using a database of 277 literary occurrences and 11 inscriptions (27-8). One of the important results that emerges from this initial study is that although the occurances of hosios & cognates increases considerably in the fifth century, there was no significant change in meaning of hosios between the early archaic and classical periods (66).

The next two chapters take up the idea of lexical competition by comparing hosios with near synonyms: eusebēs and dikaios. The first of these concludes that there is little difference between hosios and eusebēs, although some difference could be identified in the situations where the negative forms (asebēs, dussebēs, and anosios) are used, with anosios being used in situations of heightened negative emotion (106). Because dikaios & cognates are so widely used, the comparison in chapter 4 is limited to the frame of interaction with suppliants. The results suggest that hosios has a more focussed meaning than dikaios: even when talking about supplication, the latter brings with it broader considerations of proper distribution, and legal commitments, while hosios is about what the gods think right (148).

Chapter 5 addresses a particular set of examples, where hosios & cognates are used to refer to gods. This is at first sight paradoxical, because the lexeme prototypically describes behaviour of mortals to gods: gods are hosios by definition. This is explained convincingly as a 'marked' use of the lexeme, that is a use when hosios is chosen deliberately despite the availability of a more obvious lexeme - that is a lexeme for which the meaning sought is more prototypical. The effect in these cases, which are mostly found in Euripides, is to make the god appear more like a mortal.

A final comparative chapter compares the use of hosios & cognates with examples where the lexeme might be expected, but is not actually used. The focus is on inscriptions, and the discussion indicates that hosios or 'not hosios' are rarely used: religiously undesirable behaviour is indicated by specifying fines or other sanctions associated with it. The addition of explicit statements that the behaviour is not hosios make the rulings more emphatic, and may indicate the expectation of divine retribution instead of, or in addition to, directly enforceable sanctions (206).

The last substantial chapter considers the supposed 'Semantic Paradox' of cases where hosios appears to have the meaning of 'profane', and is used in apparent contrast to words like hieros. This is a point that has been the subject of considerable scholarly debate, and previous arguments are examined here. The conclusions of the chapter are that the word is never actually used to mean 'profane'. Some of the uses of hosios are marked, but all of them fall within the usual range of meanings of the word: there is no 'semantic paradox'.

In this review I have focused on the conclusions of the study. These are that hosios is a word with a straightforward meaning. But the thoroughness of the analysis that leads to this conclusion is of importance. We have a much clearer idea of the place of the term in archaic and classical Greek discourse, and can be much more confident in rejecting suggestions that it had a range of paradoxical alternative usages. But the book has a further aim, which is to show the value of studying the semantics of evaluative terms: "isolating a short period of time and then analysing the usage of a lexeme in its semantic field are informative and productive techniques" (256). If we want to gain a deeper understanding of the way people understood the world in antiquity, this approach has much to offer, and Peels has shown how it can be realised.