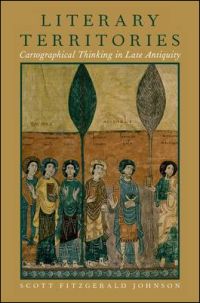 In this ambitious book the excitement felt by Scott Johnson for his themes is palpable and infectious. For the most part his lines of inquiry and conclusions prove stimulating, instructive and convincing. In an Introduction, five chapters and a Conclusion, his major concern is to probe the relationship between late antique pilgrimage accounts and other texts or maps of the period that can be considered geographic in nature - a large, diverse group documented in the invaluable Appendix (139-56) that furnishes an annotated list of all known astrological, astronomical, cosmographical, geographical and topographical texts written between 1 and 700 CE in not only Greek and Latin, but also Syriac. Johnson urges us appreciate the importance of the metaphor of geography or the map to a great range of late antique authors. The very nature of maps is that they are selective creations spatially determined by the shape of the world, and they invariably demand interpretation from the viewer. However, in Johnson's opinion Late Antiquity has so far escaped notice as a period marked by its shared aesthetic for producing encyclopedic - or, as he prefers to say, 'archival' - compilations, that is, works which sift, distil, and extend existing knowledge. He regards late antique pilgrimage accounts as "one of the purest examples of the intersection of form and content in ancient literature." They "[...] became vast storehouses of loosely related, recyclable data points about the Holy Land, the oikoumenē, and other geographies of interest. The form of the pilgrim account had a definitive impact on the way these texts were interpreted, but the form, once established, did not prohibit the cutting-and-pasting approach to the creation of new literature" (12).

Accordingly, Chapter 1 seeks to identify formative shifts in the writing of travel literature by comparing the Description of Greece by the late second century Greek 'sacred tourist' Pausanias with Egeria's Latin travel narrative about her pilgrimage journeys in the late fourth. Johnson is right to regard Egeria as a "linchpin" (27) of his project, because her account is so clearly 'archival' ("travel and collection went together", 27), and reflects a new style. She is a foreigner traversing unfamiliar territory on the periphery of her world (even though, from her Christian perspective, Jerusalem is centerpoint spiritually); as she proceeds, she has no clear idea of what lies ahead, and she engages repeatedly with living holy men.

Chapter 2 surveys a splendid spread of the period's 'aesthetic of accumulation': itineraries (especially the Antonine Itinerary); 'name-books' (especially Eusebius' Onomasticon and Adomnán's On the Holy Places); letters by Synesius and Jerome; official notitiae of the Roman empire's provinces and major cities; Holy Land topographies; the Peutinger Table or Map; Latin translations of Greek geographical works from earlier periods; imaginative and cosmographical works (by Macrobius, Martianus Capella and Gregory of Tours especially, as well as the Expositio totius mundi); and similar works of a playful, not to say mischievous, nature (Aethicus Ister, Ravenna Cosmography [1]). A final section urges that the attention paid during Late Antiquity to the major Greek philosophers and scientists of earlier centuries, Ptolemy in particular, has been misunderstood in traditional scholarship. Rather, claims Johnson, "[...] for many late antique authors, the theological and metaphysical implications of Ptolemy's approach were more important (and challenging) than the verifiability of his data" (54). The "combination cosmology-periplous" (57) was to be enjoyed at its most inventive and intertwined in the ineptly titled Christian Topography of Cosmas Indicopleustes, a sixth century Greek text likely to have been even in the Archbishop's library at faraway Canterbury 150 years later. The Conclusion to the chapter underscores literary continuity in Late Antiquity by reference to its writers' respect for earlier authorities and their reliance on the form of the Roman itinerarium. Even though no pilgrimage accounts survive from the fifth century, to Johnson this is the stage when the geographical imaginations of antiquity and early Christianity were being most actively combined and resynthesized (40, 60).

Chapter 3, shorter in length and narrower in scope, takes a late antique Greek literary text that is not primarily geographical, and furnishes a pathbreaking model of method by elucidating the geographical assumptions and structures embedded there. Johnson's choice is the anonymous Life and Miracles of Thekla of around 470, already translated by him (in Talbot 2012). The setting is Isauria, and specifically Seleukeia-on-the-Kalykadnos. Successive local, regional, provincial, and even imperial ranges of awareness, rivalry and impact are ably teased out, and the universal value of the classical locus amoenus motif emphasized.

The first purpose of the discursive Chapter 4 is to evaluate the historical or antiquarian element in Egeria's narrative, measured by her engagement with texts and collection of them. Expanding the theme of "the transformation of landscape into archive" (91), Johnson next considers both the classical, and the subsequent Christian, association of heroes or saints with a location or region upon their death or disappearance. He then turns to the assignment of a part of the world to each apostle by casting lots (kleroi), a tradition of cognitive importance attested initially around 200 in the Syriac Acts of Thomas, and explored by Johnson with reference to both Old Testament precedents and Greek ones as far back as Homer. A further section illustrates the potent association of prophets and saints with locations ranging from cave to region, as reflected in John Moschus' Spiritual Meadow, a Greek travel text of around 600 recounting the miraculous affairs of monks in the eastern Mediterranean (missing from the Appendix). The chapter concludes with speculation that consciousness of the geographical sortes apostolorum may have contributed to Constantine's audacious wish to be buried amid the twelve in a building commissioned by him.

Chapter 5 is a study of two Syriac ecclesiastical histories written in the ninth century by Thomas of Marga and Isho'dnah of Basra concerning monks of the early seventh. The discussion focuses on the geographical assumptions and emphases, and on the journeys recounted, with special attention to the western orientation adopted by both authors and its use in their narrative strategies.

In the Conclusion, Johnson's insistence that his book is no more than a series of studies on cartographical thinking (136) surely invites two observations. First, the eclectic nature of the series calls for fuller justification. Thus Chapter 5 is impressive work on texts no doubt unfamiliar to most readers. But it seems curious to devote ample space to this - by normal reckoning - post-late antique literature while, for example, ignoring the Marble Plan of Rome and treating the Madaba Map (33) so cursorily. After all, each in distinct ways powerfully projects the archival character that preoccupies Johnson (the latter map, in addition, names certain regions as kleroi). For the Madaba Map too, it is disappointing to find no consideration of Glen Bowersock's robust rebuttal in 2006 of the long held assumptions that the compiler was interested solely in the Bible and relied largely on Eusebius, Onomasticon (Mosaics as History, 17-29). By the same token, Johnson's lack of concern to probe the nature of Roman itineraries (the basis of a major claim at the end of Chapter 2) is a puzzle. Joachim Fugmann's methodical overview of them in RAC 146 (1998) merits citation, and it could prove beneficial to appraise the character of the Antonine Itinerary as I presented it in Rudolf Haensch and Johannes Heinrichs (eds.), Herrschen und Verwalten (2007), 256-70, namely a raw jumble, a quite untypical private initiative, never intended for circulation. If in the light of this perspective Johnson were persuaded to revise his assumption that an "itinerarium genre" (59) existed, then the use of itineraries made by Christian writers might conceivably be rated an even more creative development than he reckons.

The second observation is an expression of regret that Johnson opted for such minimal differentiation of what he presents for the first time in the book and what, broadly speaking, is reprinted from his earlier publications (the relevant notes on 29 and 79 are laconic, and there is none on 133). This reprinting is surprisingly extensive, encompassing most of Chapters 2 and 4, as well as the first three pages of the Conclusion (133-35 on India). Admirers of Johnson's scholarship have read all this piecemeal before in (Bibliography, 170) Johnson 2010, 2012b and 2014; at least it now appears in the book with a new level of coherence.

Imaginative historians run the risk of over-interpreting their evidence: Johnson's (reprinted) representation of Egeria suffers in this respect. So vital does he consider her for cementing his landscape-into-archive argument that she is rashly credited with an "almost obsessive archiving instinct" (88), a traveler who "we know from the visit to Edessa [...] enjoyed a collection of apocryphal texts at home in the West" (89), and who "is a collector before setting out on the journey" (87). In fact we cannot say whether the text read out (in her regular way) at St Thomas' shrine in Edessa was her own, or one supplied on the spot. Then, only because the bishop by chance offered her copies of the letters between Abgar and Jesus, does it transpire that she already possessed this correspondence at home. She still accepted the generous gift out of politeness, especially once she realized that the bishop's version was a fuller one. However, nothing here shows Egeria to be a highly motivated collector; her narrative casts no further light on how she happened to have the correspondence at home, or on the nature or quantity of her other texts there. Johnson has converted his speculations into over-confident assertions, and needlessly so, because his point stands that "travel and collection went together" (27), if collection covers much more than just books.

Altogether, Johnson's studies demonstrate how a focus on cartographical thinking can offer revealing and fruitful insight into a remarkable variety of late antique literature that cuts across established categories. To be sure, as he acknowledges (136-37), the archival habit was not exclusive to Late Antiquity, although it was further enriched then by immersion in Christianity. Moreover, we might expect cartographical thinking to remain a source of inventiveness indefinitely in an intellectual environment where a standard representation of the world, adopted universally, was never developed: hence potentially quot homines, tot oikoumenai. Johnson, and others inspired by his approach and his Appendix, should feel encouraged to expand this productive series of investigations.