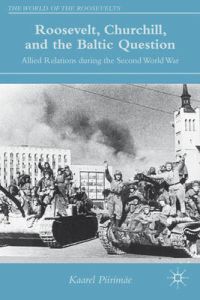 The Second World War and its aftermath is a critical period in Baltic history, which exemplifies the vulnerability of small states. Kaarel Piirimäe offers a thorough and insightful analysis of the Baltic loss of independence through getting caught up in great power rivalries, alliances and divisions of spheres of influence. As Piirimäe points out in the preface of the book, his study deals with the Baltic question in relations between the US, Great Britain and the USSR in the 1940s and as such occupies a so far neglected niche in historiography.

The book's relevance goes beyond a historical contribution. The manifestation of great power politics in the Baltic region has recently gained new significance. The configuration of power today might reflect different dynamics but the 'prejudice against the small states' that Piirimäe observed over seven decades ago is still apparent (84). As was the case in the Second World War, geopolitical and economic factors often outweigh the interests of the small states, which are perceived as trivial on a global scale. Thus, Piirimäe's historical study is also extremely timely.

The author's analysis opens by outlining the main difference between the American and the British approaches towards the Baltic issue, placing it in a broader context. He notes that Winston Churchill and Franklin D. Roosevelt held different views on the question of colonialism. While the British were concerned with preserving the empire at any cost, the Americans passionately advocated for the right to self-determination. British pragmatism and American idealism were evident in their attitude towards the Baltic States. As Piirimäe indicates, unlike Britain, the US publicly refused to recognize the Soviet annexation and granted facilities to the Baltic diplomats to continue their work abroad.

Nevertheless, with Hitler's attack on the USSR in June 1941 and the latter's coalition with the US and Great Britain, the position of the Baltic States was severely weakened. The new war allies had to reach a compromise, albeit a tacit one, on how to handle the Baltic situation. This might have been easier for the prudent British foreign policy leaders, but the US could no longer explicitly denounce the annexation either, even if it was in a clear violation of the Wilsonian principle of self-determination. Therefore, in the words of the author, 'Roosevelt's record of defending the rights of the Baltic States was in the final analysis not significantly more effective than Churchill's' (2).

Given the acquiescence of the great power allies and the silent submission of the Baltic governments, it became inevitable that the Baltics would effectively fall under the Soviet rule. The issue of de jure recognition of the loss of the Baltic sovereignty - Moscow's long-term objective - remained unresolved. Hence, the Soviet presence in the Baltics was never legitimized. In other words, the interwar Baltic States never ceased to exist, as 'no legal death was pronounced' (157). The beginning of the Cold War meant the end of the Big Three alliance and the freezing of non-recognition policies. Non-recognition also implied that the West discredited the USSR as an illegitimate empire.

The fact that the USSR did not terminate Baltic statehood but merely suspended it was best evidenced by the Baltic diplomats, who represented their states in London and Washington for the five decades of the occupation. Piirimäe's study is focused precisely on these diplomats and civil servants, their networks and their challenging mission to advocate for the independence of their countries, countering Soviet pressure on Western governments to grant de jure recognition. The position of the diplomats was a difficult one because their primary function was not foreign policy making, but representation of their governments regardless of their own personal views. Evidently, their argument against de jure recognition was diminished by the failure of their governments to take a decisive stand against the Soviet invasion.

Regrettably, Piirimäe decides to analyse only the experience of Estonian diplomats. While it is certainly necessary to limit the scope of the study, reference to 'the Baltic question' in the book's title remains somewhat misleading, as do the references to 'Baltic diplomats' throughout the book. Piirimäe does not explain why he uses the terms 'Baltic' and 'Estonian' interchangeably, although he does not discuss Lithuanian and Latvian diplomacy. This leads to the assumption that the Estonian case is illustrative of the Baltic case as a whole. Even if that was correct - although failing to distinguish between the three states is often an over-simplification - this should have been justified more thoroughly. That being said, Piirimäe's comprehensive and thought-provoking study is a valuable resource on this period of Baltic history, which despite persistent attempts to revise it has so far lacked historical clarity.