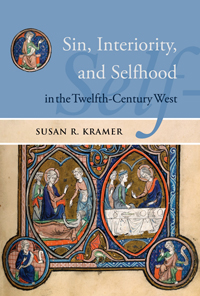 In 1215, the Fourth Lateran Council introduced the obligation of individual confession. Every Christian was henceforth supposed to confess directly to his priest all his sinful actions, words and thoughts. This decision had, according to many scholars, an important impact on the development of European ideas about selfhood and interiority.

In her new book, Susan R. Kramer presents some scientific opinions about the relation between the obligatory private confession of sins of thoughts and the growing awareness of one's inner self. There seem to be at least two possible approaches, expressed very clearly in the question Kramer asks: "Is the mandate to confess evidence that inwardness was a characteristic ascribed to medieval notion of selfhood? Or was confession a precipitating factor in the rise of a sense of self that placed value on such internal activities as thoughts, intentions and unexpressed emotions?" (xi)

But the aim of the book is not limited to the description of various scholarly positions about this problem. Kramer is analysing the important changes that occurred during "the long 12th century" in the interpretation and understanding of such concepts as sin of thought, its forgiveness, the possibility of knowing and expressing one's inner self, means of communicating thoughts, emotions and intentions, individual autonomy and responsibility for one's trespassing and so on.

The methodology Kramer applies consists of reading and analysing exegetical writings by authors like St Augustine, Ambrose of Milan, Maximus of Turin and Bede, up to 12th century writers such as Anselm of Laon, Richard and Hugh of Saint Victor, Peter Lombard, Albert the Great and others. The author shows how philosophical and theological ideas have been reformed and reinterpreted through the ages. Kramer's aim is to present the theological and anthropological context in which the decision of the Fourth Lateran Council occurred. She shows how the teaching about sin, soul, individual responsibility and means of expressing the inner self evolved and changed since Augustine. The chapters are dedicated to those singular questions.

In chapter I, "The Secrets of the Heart", the author examines the concept of the heart. The inner self of human beings, their "heart" was from biblical times considered unknown and unknowable to any one, except God. Even the owner himself could not know it. How then could the Church expect Christians access their inner self in order to describe it?

In chapter II, "The Secrecy of Conscience", the reader discovers how subsequent medieval writers approached the problem of internal sin and its possible forgiveness. Augustine was convinced that a crime committed internally could be forgiven internally, i.e. by God himself and without witness. However, the belief that even for the sin of thought one should ask for forgiveness in the presence of a priest was formulated by the time of Bede. By showing this, Kramer convincingly argues that it was not the decision of the Council that contributed to the creation of the "illusion of self". Rather, this decision was a result of a development already at work.

In chapter III, "Tears and the Articulation of Interiority", the author analyses the question of the means one has at his disposal to reveal his inner self to the confessor. The belief that only God knows and can judge the human heart was well established, based among other arguments on the idea that human language is not apt to express exactly one's thoughts, intentions and emotions. Other means of expression, such as tears, were considered, at the same time, as more or less appropriate. The beliefs concerning tears are a very good example for the problem that permeates Kramer's whole study, namely the general lack of coherence, or, as Kramer likes to point out, the paradoxes in the medieval theories about sin, soul, interiority and communication.

There are in fact several issues presented in the book, where such paradoxes occur: the inner self is, on one hand inscrutable for people and only God can know and judge it, but, on the other hand, every Christian has to reveal it to the priest. Words are inapt to express adequately whatever occurs in the human heart and mind, and yet, verbal confession is necessary for the remission of all sins, even those of thought. Tears are considered a more perfect expression of contrition, but, at the same time, an ambiguous one. Other inconsistences are revealed in subsequent chapters.

Chapter IV, entitled "Original Sin and the Autonomous Soul", addresses original sin. According to the teaching of patristic authorities, body and soul are completely different: the body being material and the soul spiritual. And yet, the sin of Adam, being spiritual, corrupts the body. Moreover, it contaminates the souls of Adam's descendants, even if the procreation is a totally corporeal process, each soul being created ex nihilo by God at the moment in which a new person is conceived. All souls are corrupted by the original sin they commit automatically when uniting with the body. And, what is perhaps the most curious idea, even if such union follows God's will, the souls are still considered guilty, because otherwise the guilt would be God's own, which is impossible to think. Medieval authors state then, that the union with body is a free, voluntary act of a soul.

In chapter V, "Sin, Contamination, and Consent", Kramer continues to deal with the issue of free will. As the sin was often compared to contagious diseases, it brings out the problem of consent.

It is fascinating to see the whole complexity of medieval thought, in all its facets, deployed before our eyes. We see the writers struggle (and fail) to form a coherent anthropological and theological theory that could be compatible with all the biblical and patristic traditions. Based on a thorough study of several texts, Sin, Interiority, and Selfhood provides the reader with a valuable vantage point to observe evolutions of medieval anthropology.