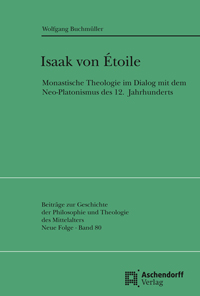 Wolfgang Buchmüller brings to this 690 page Habilitation thesis (Universität Wien 2015) the important experience of having previously translated many of Isaac of Stella's sermons. [1] The author's close knowledge of Isaac's works, coupled with his competence in medieval philosophy and theology make this the most in-depth study of Isaac's thought to date. His mastery of an extensive, multi-lingual bibliography is in evidence throughout. This bibliography includes important recent perspectives from such authors as Kurt Ruh and Alexander Fidora and thus signals a welcome renewal in a field that has been somewhat dormant since Bernard McGinn's work, The Golden Chain (Cistercian Studies 15, 1972).

On one hand, the subtitle of the work, "Monastic Theology in Dialogue with Twelfth-century Neo-Platonism," is so general as to be somewhat misleading, since over one-third of the book deals with Isaac's biography, his historical context, and questions related to the works attributed to him, and includes also an important section on his approach to interpreting Scripture. On the other hand, this title accurately emphasizes one of the main points of the book, namely, that the boundaries between the monastic and scholastic milieux were more fluid than is commonly thought.

In continuity with McGinn's 1972 study, Buchmüller delves further into the question of the sources and influences behind Isaac's writings. Investigations of this sort are particularly difficult in the case of an author like the abbot of Stella, who deliberately conceals the identity of his mentors and sources, and who generally avoids direct quotation. Nonetheless, Buchmüller brings into clearer focus the influence on Isaac of the group of thinkers known as the School of Chartres. He also suggests that the less-well-known School of Poitiers is another sphere of influence that deserves further attention. Moreover, he argues convincingly (furthering the work of André Fracheboud) that, thanks to his assimilation of the negative theology of Pseudo-Dionysius, Isaac developed an original synthesis that represents a significant moment in the history of mystical theology. This unusual harmonization of Christian and neo-platonic cosmological worldviews led Isaac to unique insights regarding the way this world order is reflected in the make-up of the human psyche.

Accordingly, at the heart of the book is section H, entitled "Anthropology," where Buchmüller shows how these insights unfold in such key areas as Isaac's thought on creation, image and likeness theology, soteriology, and his understanding of union with God. Of particular interest here is Buchmüller's treatment of Isaac's sui generis theory of the powers of the soul (sensus, imaginatio, ratio, intellectus, and intelligentia), especially his thought-provoking proposal to translate intelligentia as 'intuition', signifying a kind of knowledge that leads to an experience of transcendence or, to put it another way, a contemplative encounter with a fullness of another order (567).

Equally thought-provoking is Buchmüller's characterization of Isaac's ontological mysticism (i.e., his unitas-Metaphysik, to use Karl Ruh's term) as apparently more intellectual than the unity-of-spirit mysticism of William of Saint-Thierry or the unity-of-will mysticism of Bernard of Clairvaux but ultimately in harmony with them, since the knowledge of God in question (intelligentia / intuition) is ultimately love. Isaac of Stella thus represents a significant moment in the history of spirituality, presaging (as both Hugo Rahner and Kurt Ruh have suggested) the thought of Meister Eckhart (571).

Less satisfying is Buchmüller's treatment of Isaac's biography. He begins well with a lengthy and exhaustive recapitulation of all previous work in this area. His main concern in this biographical section is to identify as much as possible Isaac's educational background and the circle of contemporaries in which he moved. However, he goes on to make a case for Isaac's continued activity into the 1170s, arguing that his assimilation of Dionysian thought is better situated in that decade, and that the exile mentioned in Fragment 2 is best situated in the context of war during the struggle for ascendency over Aquitaine in the early 1170s. Although the author is careful to state that these hypothetical reconstructions cannot be proved, as the book goes on, he places Isaac's sermons to the 1170s as if this dating were an established fact. There is insufficient regard here for historical methodology, since there is no documentary evidence that Isaac lived beyond the last years of the 1160s.

Along the same lines, the author argues more convincingly in favor of attributing to Isaac chapters 1-33 of the pseudepigraphic work De anima et spiritu secundum Augustinum. However, even though he acknowledges that critical textual work is needed before final judgement can be made in this matter, his tendency is to treat the hypothesis as near certainty.

Apart from these complaints regarding areas that are, in the end, somewhat peripheral to the main purpose of the work, Buchmüller has produced a valuable study that touches on all the major themes of Isaac's works. The book includes an extensive bibliography and a general index of persons and places. Given that one of the outstanding features of this work are its many penetrating analyses of passages from Isaac's sermons and letters, an index of references to Isaac's works would have been highly desirable.