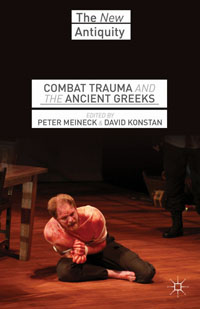 This book is one of the outcomes of the multifarious programme Ancient Greeks/Modern Lives, funded by the National Endowment for the Humanities (NEH), the US independent federal agency whose existence was threatened by President Trump in March 2017. From 2009 to 2013, through workshops, staged readings, podcasts, and more, the programme brought Greek poetry and drama across the US working with veterans and communities affected by military overseas engagements.

The volume has at its core the question of whether ancient Greek sources reveal data about the neurological and socio-psychological traumas of soldiers coming home at the end of a war. Being war ubiquitous in antiquity, the search for Post-Traumatic Stress Disorder, PTSD, from combat experiences might seem an easy task at first sight. Conversely, the topic has several layers of complexity to be considered.

A first analytical layer focuses on whether PTSD and CSI (Combat Stress Injury) are universal. All the chapters contribute to demonstrate that these syndromes are, and were, real. The point is to demonstrate how they were framed in cultures distant in time and space. On this regard, Jason Crowley ("Beyond the Universal Soldier") offers a convincing examination of the perils of pushing a comparison between a "modern apple" with an "ancient orange" (106). The historian must not forget how the response of a soldier to combat is determined by social norms and values as well as tactical and technological environments. The American Vietnam veteran and the Athenian hoplite were not subjected to the same pressure in the same circumstances: while the first was "critically vulnerable to PTSD/CSI", "the Athenian hoplite was effectively immunized against the same risk" (117).

The non-universality of the management of combat trauma does not impede, however, to look for traces of this phenomenon in antiquity. William Race ("Phaeacian Therapy") highlights the healing power of story-telling in the Odyssey, while Lawrence Tritle ("Ravished Minds") finds in Greek accounts, for example in Gorgias' Encomion of Helen and Xenophon's Anabasis, the neurological effects of the horrors experienced in battlefield. Sara Monoson ("Socrates in Combat") masterfully presents the resilience of Socrates during military service and afterwards. Juan De Vivo ("The Memory of Greek Battle") identifies in the shape of the Corinthian helmet a reason for fragmented perception and memories, while in the trophy a means for reconstructing narratives of victorious fighting.

A second crucial feature of the book is the widening of the war studies perspective from the individuality of the male soldier to the society in its entirety. [1] Kurt Raaflaub ("War and the City") explains how the Athenian civic community was affected, from the dead and wounded to the prisoners, refugees, and orphans. This chapter helps at understanding not just war and its effects, but also the functioning of democracy and the civic life of the polis more in general. Corinne Pache ("Women after War") compares the women in the Homeric epic with the Lionesses, US female soldiers in service in Iraq in 2003/2004. While the interplay between ancient literature and contemporary stories is interesting, sometimes the two seem only forcefully brought together, and the consideration that women "remain marginal characters in epic" (75) might need to be softened. Nancy Sorkin Rabinowitz ("Women and War in Tragedy") explores Attic tragedies, in particular the Oresteia, Iphigenia at Aulis, Heracles, Ajax, Trojan Women, and Hecuba, and shows that to underline in ancient texts the violence against women during the war alerts us on the condition of women victims of war crimes today. Sharon James ("The Battered Shield") untangles the pain and suffering of the family members of a soldier from Menander's Aspis, in contrast with Alan Sommerstein ("Combat Trauma in Athenian Comedy"), who thinks that Athenian comedy avoided to treat the dreadful aspects of combat.

Finally, the third trait of quality lies in the importance given to the therapeutic power of theatrical performance for veterans today. Thomas Palaima ("When War is Performed") looks at how war is represented in literature, theatre, and music, from Homer to Charles Patterson, a US Vietnam Veteran, via Bruce Springsteen. He notes that the best descriptions of the senseless human loss of war are "clear and direct and strip away illusions" (273). To his examples, I would add the concise poem Soldati by Giuseppe Ungaretti, written in July 1918 in the French trenches. He poignantly conveyed the precariousness of existence in the battlefield in nine words, comparing the soldiers to leaves on trees in the Autumn ("Si sta come / d'autunno / sugli alberi / le foglie") and making contemporary a poetic tradition of similitudes between humanity and leaves that span from Homer and Mimnermos to Dante. Paul Woodruff ("Performing Memory") highlights how theatre can help to cope with memories of combat trauma. Plays like Sophocles' Electra, Ibsen's Ghosts, and his own piece Ithaca in Black and White, confines memory and amnesia to the stage, giving to the audience the opportunity to live their present lives at the end of the performance.

The volume is immune to the thematic disunity often recurrent in edited volumes and at the same time it offers a collection of different viewpoints on (mainly literary and philosophical) ancient texts. However, sometimes similar or related arguments are not cross-referenced. Furthermore, while theoretical concepts are essential, the risk of flattening ancient evidence on modern ideas is present. Finally it would have benefited the volume a more extensive treatment of the history of psychotherapy and mental illness in antiquity, which could have received more space with one chapter on medical authors and their lack of attention for the veterans' psychic wounds, for example. Published only a few months before this book, an article by Yulia Ustinova and Etzel Cardeña stresses that, while Hippocratic doctors treated the physical injuries of soldiers and investigated madness in civilians, it was Gorgias the pioneer who linked combat and madness, and it similarly points out that techniques to hail fear, grief, and psychological traumas of ancient soldiers came from sophist talking, drama, and ecstatic rites. [2]

The great merit of the book under review is to remind us that in the Greek world peacetime was rare and that war could be too cruel to articulate in syllables and words. Theatrical performance makes the sharing of experiences possible, creating a common ground where the divisions between civilians and army as well as soldiers in combat and veterans disappear.

Personal involvement of some of the contributors in recent wars, and the fact that behind the volume there was an intense programme of events and public readings, rendered the results more vivid. In brief, the book offers stimulating food for thought on the moral and psychological impact of war to classicists and ancient historians as well as interested readers.