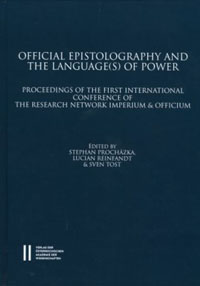 The volume under discussion aims at investigating what official, administrative letters can tell us about the cultural and symbolic structures that underlie their textual surface. In their rich introduction, Reinfandt, Tost and Jursa emphasize that this is not just a volume on letter-writing in administrative contexts: one of the questions to which contributors often return is how far distinctive communicative patterns may correlate with manifestations of 'bureaucratic rationality'. More specifically: communication tends to involve both the expression of symbolic power and the transmission of specific information - which raises the question as to whether we should assume that the latter prevailed in societies characterized by bureaucratic thinking, and that the performative aspect might have been uppermost in traditional and patrimonial forms of governance. Sensibly, no strict definition of 'letter' is given at this stage: as Sallaberger points out, there is no separate term for '(oral) word' and '(written) letter' in Sumerian (which closely matches the situation in archaic Greece); similarly, in the late antique period, petitions are a form of letter, and rescripts may overlap with them (Corcoran).

The Near Eastern part opens with two splendid papers. E. Frahm ('Some like it hot') applies the Levi-Straussian metaphor of 'hot' and 'cold' societies (geared towards change and social transformation, or resisting change) to the sources: administrative documents, or royal inscriptions, tend to emphasize continuities, and so project the image of a 'cold', static society; this 'lukewarm' image is reflected also in the Mesopotamian historiographical tradition. Letters by contrast are 'hot', they address immediate problems, are sent in situations of crisis (one could compare the very different world of early Greek epistolography: see E. Eidinow - C. Taylor, 'Lead-letter days: writing, communication and crisis in the ancient Greek world', CQ 60, 2010, 30-62); letters allow the writing of microhistory - and shed a different light on the Mesopotamian mind.

W. Sallaberger, for his part, offers a close analysis of the diction and function of letters in the State of the third dynasty of Ur (2110-2003 BC), which leads to revolutionary results. The comparison between the number of surviving letter and that of other surviving administrative documents shows that letters are proportionally too rare to have been the main way of conducting administration. Sallaberger thus shows that this is not a world of 'letter-orders', reflecting an authoritarian regime, as is commonly accepted, but that letters were used when problems turned up in the administration. The Ur III letters are focused on the propositional content, the transaction, and verbal features of politeness are largely omitted: the absence of a language of power in the letters is consistent with a less regulative conception of the Ur III state.

C. Charpin offers a 'thick' description of the letters of the Mari archive. He explains the 'rather grand freedom of tone' of these letters, which contrasts with the stereotypical style of later corpora, with the frequency with which letters were dictated, or even personally written, by the senders (significantly, letters of nomadic chiefs also present this same freedom). C. Michel focuses on the letters of the kings of Assur found at Kanis, and sent either to individual merchants, or to the karum (trade post). Her close analysis brings out some fascinating peculiarities: for instance, the king always writes anonymously, as waklum (king); his name is never mentioned. However, unlike the paleo-Assyrian letters, the royal letters almost always specify the patronyms of the individuals mentioned in the letters, unless they are members of the royal family: this is a society in which homonymy is frequent, so the king must indicate the complete identity of the persons he mentions, because he could potentially be interested in anyone of his subjects.

K. Radner opens her discussion of the neo-Assyrian royal letters by pointing out that the image of the king found in letters is very different from that projected by royal inscriptions (a point also raised elsewhere in the volume, e.g. by Frahm or Rollinger). She emphasizes that officials would write only when the situation was so difficult that it became necessary to involve the central administration (so also, for different contexts, Sallaberger, Baker and Groß (76), and Jursa and Hackl (106)). The letters thus deal with the unexpected rather than the routine; to ignore this inevitably results in a negative assessment of the capabilities of Assyrian administration (65). The analysis of the language of Assyrian letters conducted by H. Baker and M. Groß shows that the correspondence between officials and their king is composed in a codified language (as when officials echo the King's own mode of expression) that reflects a shared set of values and expectations; interestingly, this is much less evident in the letters exchanged among officials. For his part, Fales, starting from the fact that so much of the royal correspondence has to do with denunciations of injustice and need for surveillance, argues that judicial appeal to the king and practice of denunciation in epistolary form were encouraged by the king himself, because they offered him the chance of asserting his patrimonial authority.

By contrast, the analysis of forms of politeness, rhetorics and argumentation in late Babylonian epistolography leads M. Jursa and J. Hackl to conclude that the Late Babylonian official letters stem from an administrative system with pronounced vertical hierarchies both within institutional units and between the royal administration and institutions in provincial towns like Uruk. In this system, relationships are not as personalized as in earlier systems, and a certain degree of bureaucratization is visible.

R. Rollinger focuses on a somewhat different issue, the intended audience of Achaemenid royal inscriptions. His discussion of the choice of language resonates with other papers (e.g. those of Sallaberger, Jursa and Hackl, Kearsley, Reinfandt): in many situations more than one language was possible, and the choices (as well as the hierarchies between languages) reveal underlying cultural certainties of the society in question.

The fairly tight focus which is a hallmark of these papers is less marked in the next section, on epistolography in the classical world. The discussion here concentrates in turn on Ptolemaic administration and the very limited power even of a dioiketes to give clear directives (C. Armoni); on the interaction between kings and cities in the Hellenistic East (V. Hoffman, who settles for a dynamic reciprocity between the two); on the Hellenistic and Roman royal correspondence, seen from a 'modern management perspective' (H. Taeuber; his conclusion is that ancient leaders had a modern-sounding argumentative technique, which aimed at winning over the cooperation and acceptance of the various functionaries); on the usefulness of rationality as a heuristic lens (C. Ando, who shows, through three case-studies spanning the period from the Gracchan lex repetundarum of 123 BC to the late fifth century CE, how a political culture, some aspects of which could be characterized as rational in the Weberian sense, emerged with Augustus); and on a detailed typology of forms of writing and communication (W. Eck). This part closes on a fascinating discussion by A. Bryen of the appearance in 2nd century CE Egypt of a new form of legal argument, based on the collection of precedents, a practice that marginalized appeals to custom and history as well as appeals to ethics and important principles. Bryen shows how this implies an active relationship between individuals and the law; this point features also in the paper which opens the next section, S. Corcoran's 'Imperial communication in a collegiate monarchy'. Corcoran shows that in the second and third centuries CE, rescripts would be copied and collected, with the rather surprising result that 'texts originally issued by emperors to individuals at their own request and for their use alone ended up having the equivalent of a mass (re)promulgation' (223).

A detailed analysis of the archives of the riparii (civil police officials, active in Egypt from 4tth to 8th century CE) allows S. Tost to argue that there is no trace here of patrimonial structures, but also no sense of a bureaucratic collective consciousness or ethos, though indications are present of a language of power intrinsic to the mental patterns of the administrative context ('... wohl aber Ansätze einer den Mentalitätsmustern im administrativen Umfeld innewohnende "language of power"'). J.C. Fournet's detailed analysis of the sixth century CE dossier of petitions presented by Dioscoros of Aphrodite leads him to stress the role played by petitioners in shaping official epistolography. A. Papaconstantinou focuses on a selection of letters sent by the Egyptian governor Qurra ibn Sharik to the Christian Greek pagarch Basileios at the beginning of the eighth century CE; she shows that the official letters of Qurra convey 'a discourse of power, authority and sanction', but also that the orders were not followed, and that this exhibition of power was compensation for a fundamental impotence: the pagarchs were rooted in local society. This accounts for the replacement of these elites with Arab Muslims who had no local powerbase, and a different approach to their duties towards the state. L. Reinfandt inquires into 'Empireness in Arabic Letter Formulae': after stressing that the homogeneity of Arabic formulaic structures in documents from Egypt, Syria, Iran and Khurasan is an expression of a remarkable cultural self-awareness at an early time, Reinfandt moves from the bilingual letters of Qurra to Arab administrative letters of the 13th to 15th centuries CE, following changes in the prescript and formulaic blessing; S. Prochazka and U. Bsees' study of performative utterances in Arabic papyri rounds off the volume.

As stated at the beginning, this is a hugely ambitious volume; as part of a larger project, the Research Network Imperium & Officium, focused on the administration of ancient empires, it inaugurated the series (five conferences have taken place since the inception of the project in 2010; the fifth and final one, which took place in Vienna in 2014, came back, in a sort of ring-composition, to the topic of 'Governing ancient empires'). It is also a very successful volume, raising a number of fascinating concerns, and building bridges across numerous ancient cultures and geographical areas (a well-conceived thematic index facilitates the theme-focused use of the volume). The various contributions show that administrative letters do not simply relay information, but convey messages beyond the textual surface, functioning as an instrument of power that supported and created collective identities and hierarchies within a given administrative or governmental system.