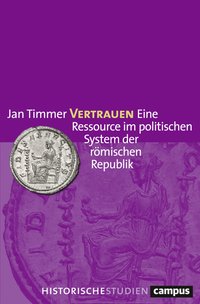 The book under review is a revised version of the author's Habilitationsschrift and the result is an ambitious and challenging study of Roman political culture that explores the concept of 'Vertrauen', trust, which is identified as a vital 'resource' underpinning the aristocratic government. The starting point for the investigation comes from Luhmann's interpretation of trust as a factor reducing social complexity in advanced societies, supposedly facilitating co-operation and reciprocity while at the same time minimising the need for formalised controls and hence cutting 'transaction costs'. Since the Roman Republic functioned as a 'Nicht-formalisiertes Verhandlungssystem' with the senate operating on the basis of consensus rather than majority rule, Timmer suggests that trust was the key factor which enabled negotiated solutions to be reached; it was the 'Schmiermittel' of political decision-making, not least because it encouraged deferred reciprocity and allowed politicians to back down from (minority) positions, assured that their gesture would be returned at a later stage.

Having set out his general model of the relationship between trust and consensus-based government in the first part of the book, Timmer then investigates in considerable detail the various ways in which trust was promoted, inculcated, solicited and advertised among members of the Roman elite, ranging from personal interaction, letter writing, to common identity, upbringing and education, all under the heading of 'Grundlagen von Vertrauen'. The author here makes important observations about the remarkable extent to which the Roman elite interacted personally with each other and shared fundamental interests and outlook rooted in common socialisation. In the final section Timmer looks at the other side of the coin, mistrust, which he argues played a significant part in the gradual disintegration of the consensual system that eventually led to the demise of the aristocratic republic. Trust was, according to this argument, eroded by internal imbalances within the ruling elite, above all the rise of powerful generals, which undermined the principle of trust-based co-operation and reciprocity.

While the overall narrative emerging from this analysis remains conventional, what the book brings to the study of the Republic is a new level of theoretical sophistication; indeed, large sections are not actually concerned with ancient Rome but explore trust as an abstract sociological concept. The ever-present theoretical dimension is both the strength and weakness of the work. On the one hand, it allows the author to ask interesting questions about the factors that shaped social and political interaction within the Roman elite; on the other hand, it also reverses what we might call the argumentative 'direction of travel', for it is ultimately from modern theories of trust as a 'resource' facilitating co-operation in contemporary societies that the author derives his argument that it provided the essential 'lubricant' which enabled the Roman republic to function. However, this central contention is never really substantiated in any depth, through examinations of actual political practice or analyses of concrete historical instances where mutual trust can be identified as a critical factor in the creation of senatorial consensus.

The notion of a highly competitive republican elite co-operating because they trusted each other would prima facie seem rather counter-intuitive, and the evidence from the Late Republic certainly does not give the impression of an elite characterised by mutual trust. The Middle Republic may lend itself better to Timmer's model, although here the conventional picture of stability and consensus probably owes much to Livian hindsight and idealisation. Moreover, these features might well be explained by a variety of social factors other than trust, including effective elite socialisation, shared political interests and strong internal hierarchies, which would have promoted conformity and helped keep dissidence in check. Therefore, while few would doubt that personal trust played an important role in elite interaction at all levels, the suggestion that it represented the arcana imperii of the Roman nobility remains unproven.

The theoretical foundations of this work are apparent in all its aspects, including the presentation. As Timmer notes in his discussion of Roman letter writing, the choice of words and style can signal 'Verlässlichkeit, Kompetenz und Mitgliedschaft in einer Gruppe' (149), and in this case the targeted group clearly seems to be that of social theorists rather than ancient historians. The discussion is highly abstract and couched in theoretical language to an extent that may alienate potential readers outside this field. For example, one wonders what historians will make of a sentence like this: 'Diese Komplexitätsreduktion ist insofern notwendig als Interaktionen zwischen ego und alter eigentlich erfordern würden, dass ego reflektiert, dass es selbst ego, für alter alter und gleichzeitig für alter dessen alter ego ist' (194). It is not immediately obvious either what is gained by defining the relatively straight-forward problem of powerful generals in the Late Republic in terms of a discrepancy between a 'production' and a 'distribution' side of politics, cf. the author's statement that 'Der Kooperationsbereitschaft und Kommunikationsfähigkeit innerhalb der Produktionsdimension standen kompetitive Interaktionsorientierungen der Verteilungsebene gegenüber' (262). In addition, the accessibility of the work - at least to a foreign readership - is hardly enhanced by the author's choice of a particularly elaborate form of German academic prose, often involving complex periodic constructions running over 10-15 lines. This is in many respects regrettable, for the undaunted reader will be rewarded with many stimulating ideas and observations, which deserve a place in the current debate about the 'political culture' of the Roman republic and the workings of the Roman elite. Particularly valuable is the acute and perceptive analysis of the political system (32ff), which articulates important new insights into the paradoxical nature of the Roman 'constitution'.