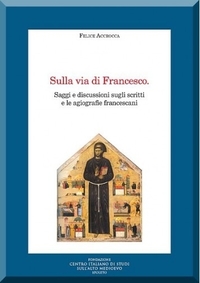 Felice Accrocca is a student of two renowned Franciscan historians: Raoul Manselli and Edith Pásztor. He is a former professor of medieval history at the Pontifical Gregorian University and he is now the bishop of Benevento, Italy. He has written extensively on Francis of Assisi, the early Franciscan hagiographical texts, the Franciscan Spirituals (with a special focus on Angelo Clareno, about whom he wrote his doctoral thesis under the directorship of Edith Pásztor), and medieval Franciscan history. He has produced both scholarly works and spiritual reflections based on these early Franciscan sources. His bibliography numbers around forty pages which is included in this volume under review.

One of his main concerns in his scholarship is the so-called "Franciscan Question" - that is, how do we know the "real" or "historical" Francis of Assisi (1182-1226)? According to Franciscan scholar Michael Cusato, in the late nineteenth century Paul Sabatier opened up this query because he questioned the sources that we rely on in order to determine the real Francis by proposing that the official sources (Thomas of Celano and Bonaventure) were too hagiographical and theological for us to get to the real Francis. Other later sources, which were believed to be from the earliest companions of Francis, were considered by Sabatier to be more reliable for us to get to the real, historical Francis. Many of these sources are claimed to be from the 1240s when the earliest companions of Francis were dying out. There was an attempt during that decade to gather together the most authentic deeds and sayings of the saint from Assisi so that the "real Francis" would not get lost in history and be replaced by the "hagiographical" saint. Accrocca entered into the history of the Franciscan Question when he became a student of Raoul Manselli, whose monograph "Nos qui cum eo fuimus": Contributo alla Questione Francescana (1980) opened up a new stage in this area of Franciscan research and writing. He has become one of the standard critics of Giovanni Miccoli and other scholars whose own research and writing challenged the work of Raoul Manselli, though he is a critic of his mentor also.

Sulla Via di Francesco contains many of Accrocca's most important works of his illustrious scholarly career. He provides an introduction to the volume and a bibliography of all his scholarly works until 2017. The volume is then divided into three sections: four substantial articles that deal with some hagiographical sources (fonti agiografiche), six essays on the history of historiography (storia della storiografia), and ten discussions (discussion) on various authors and works in early Franciscan sources.

The first section on the hagiographical sources presents four of his more significant articles, the first of which concerns the "Encyclical Letter of Brother Elias." This letter, claimed to be written by the Minister General right after the death of Francis, is important in Franciscan history because, if authentic, it would be the first statement from the sources not only about the death of Francis but also the stigmata of Saint Francis. Accrocca's study of this letter is the basis for the article that introduces the text in the most recent English translation of the early Franciscan sources on Francis of Assisi. [1] His research shows that there is very little evidence from internal and external sources to prove that this letter is authentic. We see demonstrated in this article how knowledgeable our author is of the history of Franciscan tradition in regard to these early sources and how they have been interpreted through the ages.

The third article of this first part of the book is concerned with Thomas of Celano and the testimony of the earliest companions of Francis. This article is his response to Raoul Manselli's book "Nos qui cum eo fuimus": Contributo alla Questione Francescana that was very instrumental in raising once again the Franciscan Question. The article centers itself on the relationship between Thomas of Celano's Memoriale in desiderio animae, the Compilatio Assisiensis, and the Speculum Perfectionis. The latter two were considered to be the published material of the early companions of Francis. The heart of the debate about these sources is which of these texts reveals the authentic words and the intentions of Francis in regard to the issues of poverty, humility, obedience, community life, etc.

The fourth and final article of the first part of the book focuses on a manuscript (ms. Isidoriano 1/73) that is in the archives of San Isidoro in Rome. This manuscript is very important because it contains a number of important early sources for the life of Francis of Assisi (in particular Intentio Regulae, Verba Francisci, Speculum Perfectionis). Included in this manuscript is a seldom cited text entitled La Silloge Bonaventuriana, an anthology of moral and devotional excerpts from the Major Life of Bonaventure that was written in the early 1260s. Accrocca's article examines this text (and provides the Latin text itself) to show that these passages from the Major Life were chosen because they were considered close to the spirit of a more rigorous form of Franciscan life associated with the Spiritual branch rather than the more Conventual form of the early Franciscans. These passages were most likely read in a liturgical context among the friars who were living in hermitages rather than engaged in the pastoral life of the early Observance, that is, those working directly in parishes and in the preaching apostolate.

The second section of the book contains six important articles by Accrocca that deal with the history of the historiography of the sources for the life and spirituality of Francis of Assisi. These studies focus not only on Accrocca's mentors Raoul Manselli and Edith Pásztor, but also on the work of other Franciscan scholars such as Teofilo Domenichelli, Salvatore Minocchi, Giovanni Marcati, and Luigi Pellegrino. These studies all center on issues related to the Franciscan Question about the early sources of the Franciscan movement.

The third part of the book contains ten articles or discussions (discussion) on various authors and works in early Franciscan sources. These discussions not only deal with the earliest hagiographical sources for the life of Francis of Assisi but also the writings of Francis, and especially the two chartula (the autographi of Francis and Brother Leo) that are in the Basilica of Saint Francis and the Cathedral of Spoleto. Accrocca also presents the recent research concerning the writings of Saint Clare and her earliest hagiographical sources. Especially important is his critical review (in the article "Corpus Agiografico e Biografie di Francesco d'Assisi. A Proposito di Alcuni Libri Recenti") of the work of the popular book on Francis written by the Dominican Augustine Thompson and other recent biographies of Francis based on his own abundant knowledge of the sources and history of interpretation in regard to the Franciscan Question.

This volume testifies to the importance of Accrocca to the world of Franciscan studies, in particular to the study of the so-called Franciscan Question. We see in these articles a master at work, not only because he is fully conversant with the history of the interpretation of the main texts of the early Franciscan movement (the writings of Francis and Clare and the numerous early vitae of Francis), but also because he is a scholar who is very knowledgeable about the manuscript tradition of all these texts. He provides his readers with not only his own interpretation of these sacred texts of the early Franciscan movement, but also the reasoning behind why he interprets these texts in such a way. Accrocca is also very knowledgeable about contemporary scholars who continue to present new research and insights into the Franciscan Question. One cannot try to answer this question about the "real" or "historical" Francis of Assisi without reading his numerous writings.

As Accrocca states in his introduction to this volume, he now has to redefine his research (sebbene ridimensionando un'po l'impegno) after being appointed a bishop. But he also expressed the hope that he will be able to continue to live the life of a researcher of the Franciscan tradition - a hope that all of us can share.